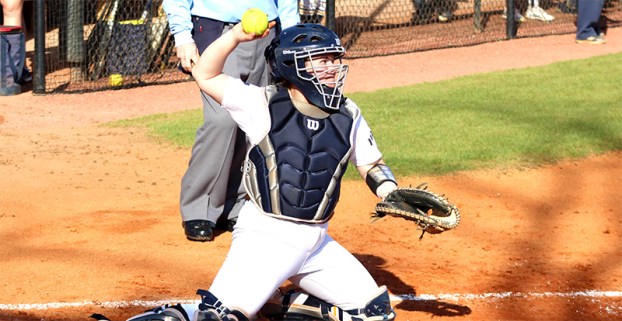 Lady Hurricanes Combine for 34 Runs in sweep of Albany State

ALBANY – The Georgia Southwestern softball team went 2-0 to open Albany St’s. season, leaving them scoreless in both games, 12-0 and 22-0. The Lady Hurricanes finished with four home runs and six doubles on the night.

In Game 1 against ASU, Zoe Willis picked up the first hit and RBI of the game with the bases loaded and two outs. She knocked a single into center field to plate Kimmy Singer for a 1-0 score to open the game. ASU also picked up their first hit of the game in the bottom inning but remained silent after that as GSW (4-1) controlled the game.

After staying silent for three innings, GSW scored seven runs in the top of the fourth as a double by Hailey Pinette got the Lady Hurricanes on base. With bases loaded and one out, Chloe Zoeller had a RBI single that plated Pinette. Singer picked up an RBI when she was hit by a pitch followed by Katelyn Wood, who had a two RBI single. The Lady Hurricanes finished the inning scoring twice on passed balls and once on a SAC fly by Kayla Kerr. Shannon Gibson started the top of the fifth inning with a solo home run. A two RBI double by Kerr pushed the score up for GSW as they won, 12-0, in five innings.

Willis picked up the win for the Lady Hurricanes, striking out nine Golden Rams in 4.0 innings of work.

In Game 2, the Lady Hurricanes scored 12 runs in the fifth inning, while also scoring at least once in every other inning as they kept ASU (0-2) off the board again. After being up 1-0, McGuff hit a two RBI home run into center field. An RBI single by Zoeller made the score 4-0 for GSW. Wood started the top of the fourth inning with a two RBI home run. The Lady Hurricanes then scored twice on field errors by the Golden Rams. After hitting a home run earlier in the game, McGuff doubled for another RBI.

With bases loaded and two outs at the top of the fifth inning, poor pitching and errors led to GSW scoring 12 runs. Walks and errors plated seven Lady Hurricanes. Kerr finished with a RBI double followed by Willis with an RBI single. Pinette finished off with a two RBI home run to end the game.

The Lady Hurricanes will return to Americus to host their home opener on Saturday, Feb. 27 with a doubleheader against Middle Georgia St.