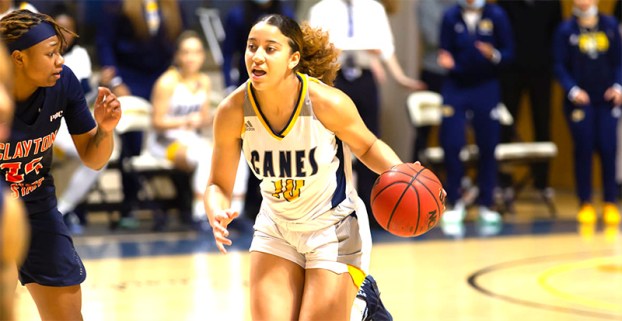 GSW freshman guard Jaleah Storr broke a GSW school record for most points scored in a game when she poured in 35 points in the Lady Hurricanes’ 74-73 victory over Columbus State on Wednesday, February 24 Photo by Christopher Finn

COLUMBUS – With three seconds left in the game, GSW freshman guard Jaleah Storr received a pass at the top of the key and drove it in for the game winning layup, as the Georgia Southwestern women’s basketball team defeated Columbus St. 74-73 Wednesday evening in a Peach Belt Conference game.

Storr finished with 35 points, seven rebounds and seven steals. Her 35 points sets the record for most points scored in a game by a women’s basketball player.

CSU kept their momentum going into the second quarter going up by more than 13 points with 6:43 remaining in the half. A short 7-0 run sparked by a three from A’Aliyah Clay cut the score down for the Lady Hurricanes, 27-21, with 4:06 left in the second. GSW defense held strong, as they tied the game at 27-27 with a layup by Storr. On the following possession, a fast break steal by Lex Chatman and a three gave GSW their first lead of the night, 32-27. Lady Hurricanes took a 32-29 halftime lead.

After CSU tied the game, GSW took the lead and held it until it was tied again at 38-38 with 6:10 remaining in the third quarter. As both teams exchanged leads, CSU escaped to a six-point lead with a deep three, 46-40. The Lady Hurricanes tried to tie the game but the Cougars kept the lead to end the third quarter up, 55-48.

Two minutes into the final quarter, CSU took a 58-48 lead with 8:04 left in the game. A three by Chatman followed by a layup by Storr cut the score down to five points but CSU continued to score on the other end. Back-to-back three’s and a layup by Storr tied the game at 63-63 with 4:37 remaining. CSU kept the lead but GSW continued to tie the game as team. With 1:54 remaining, a three by Columbus St. extended their lead to three, 72-69. A layup by Daelyn Craig cut the score to one point and a free throw by Storr tied the game with 39 seconds left. CSU took the lead, draining 1-of-2 free throws. On the following possession at half court, Storr received the ball at the top of the key and drove it in for the go ahead win.

All of the Cougar starters finished in double-digit scoring as Emila Tenbrock led with 18 points followed by Amber Abusbeih finished with 17 points. Chrisalyn Boston finished with 10 points and team-high 18 rebounds.

The Lady Hurricanes will play their final game of the season on the road at Young Harris on Saturday, Feb. 27. Tipoff is at 1:30 p.m.