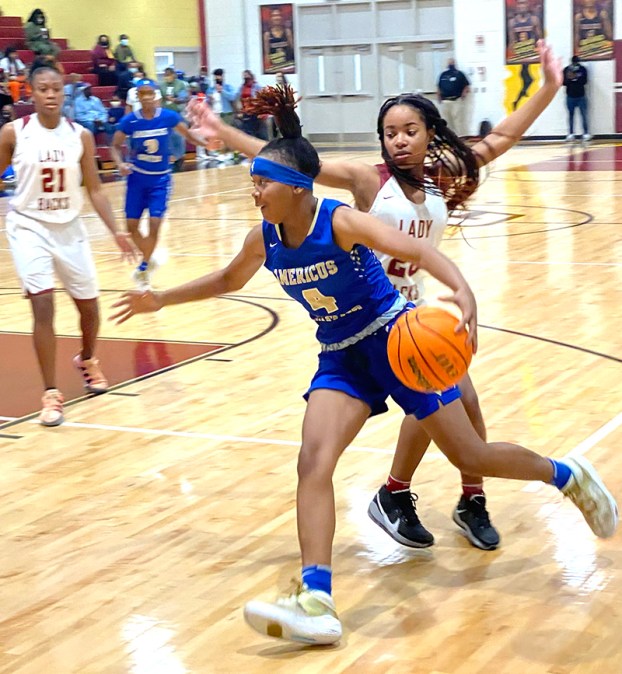 Americus-Sumter sophomore guard Aviyonna Clemons (4) tries to beat her defender off the dribble and drive to the basket. Clemons scored 12 points in the loss to Cross Creek. Photo by Ken Gustafson

AUGUSTA – The Americus-Sumter Lady Panther Basketball Team and Head Coach Sherri Harris (ASHS) knew they were in for a tough challenge when they made the four-hour journey to Augusta to take on Cross Creek (CCHS) in the second round of the GHSA Class AAA Girls’ State Tournament. The Lady Razorbacks (20-2) are the #2 ranked team in the state in the GHSA Class AAA standings. While the Lady Panthers were able to win the third quarter and stay within striking distance, they were not able to stop the Lady Razorbacks down the stretch in the final quarter and fell to CCHS 54-41.

With the loss, ASHS concludes its season with a record of 15-5.

“We came out a little flat. In laymen’s terms, they (CCHS) punched us in the face,” said Harris. “They weren’t missing anything. I think in the second quarter, they kinda died down. We came out and made some adjustments. In the third quarter, we won that battle.” However, Harris went on to say that in the fourth quarter, her club struggled with missed easy baskets, turnovers and allowing the Lady Razorbacks to get offensive rebounds down the stretch. Those things did indeed prove costly in the loss to CCHS. “When you are playing a good team on their home court and in a hostile environment in a hot gym, it’s hard,” said Harris. 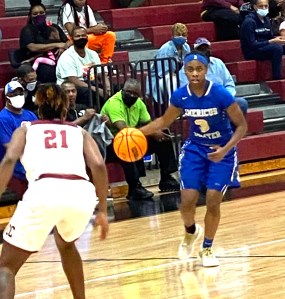 ASHS senior point guard Destinee Sims led the Lady Panthers in scoring with 15 points, with all of them coming on three-pointers. Sophomore guard Aviyonna Clemons was also in double figures with 12 points. Juniors Tiffani Goodman and Trinity Jackson each scored five points and junior Kaylin Holley had three. Senior small forward Natasha Jackson made one free throw in the contest to round out the ASHS scoring.

One major factor that was not in the Lady Panthers’ favor was size on the inside. The Lady Razorbacks had a decisive advantage in that category, which allowed them to dominate the boards and get second chance offensive rebounds. Another factor in the outcome of this game was foul shooting. The Lady Panthers struggled at the free throw line, making only 5 of 11 attempts. CCHS, on the other hand, shot 9 for 10 from the charity stripe.

Three CCHS players finished in double figures in this game. Jordyn Dorsey led the Lady Razorbacks in scoring with 22 points, Michaela Bogans had 12 and Jasiiyah Holmes scored 10 points in the winning cause. 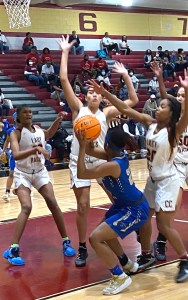 Americus-Sumter senior forward Natasha Jackson (22) tries to go up and score against two Cross Creek defenders. Jackson scored one point in the loss to the Lady Razorbacks.
Photo by Ken Gustafson

As the first half continued, the Lady Panthers continued to struggle offensively against CCHS. With 4:26 left before halftime, Bogans drained another three-pointer to cap off a 5-0 run by the Lady Razorbacks, increasing their lead to 26-12 and prompting Harris to call a timeout.

However, the Lady Panthers continued to struggle offensively against CCHS for the remainder of the half and trailed 30-14 at halftime. 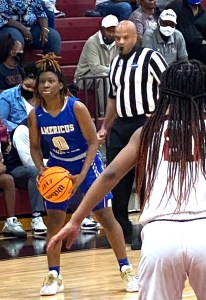 Americus-Sumter senior guard Destinee Sims (0) is seen here looking to pass. Sims led the Lady Panthers in scoring with 15 points, all of them coming on three-pointers.
Photo by Ken Gustafson

Clemons scored the Lady Panthers’ first six points of the game, but went scoreless for the rest of the first half. Sims was able to score six first half points on two three pointers, but other than the production of Clemons and Sims, there was very little offense from ASHS in the first half.

As for CCHS, they were led in first half scoring by Bogans, who scored all of her 12 points in the first half.

Early in the second half, both teams traded baskets and the Lady Panthers trailed 34-20. However, ASHS had more opportunities to cut their deficit, but missed some easy shots on the inside. As the third quarter continued, the momentum began to swing towards ASHS. The Lady Panthers were able to generate some turnovers and got to within nine points on a three-pointer from Kaylin Holley, making the score 36-27 CCHS. Early in the fourth quarter, ASHS still only trailed by eight at 38-30, but Dorsey was able to score and complete a three-point play to push the Lady Razorbacks’ lead back up to double digits. A couple of minutes later, the Lady Panthers were once again within eight at 43-35, but Dorsey drained another three-pointer to push the CCHS lead back up to 11.

Undaunted, the Lady Panthers struck back with another three-pointer from Sims and would later cut their deficit down to seven at 48-41 with 3:02 to go.

However, that would be as close as ASHS would get. Late in the game, the Lady Panthers had opportunities to get the ball back and cut further into their deficit, but they struggled to get defensive rebounds down the stretch, which gave CCHS second chance opportunities. With 2:39 to go and ASHS trailing 48-41, Trinity Jackson had an opportunity to get a defensive rebound, but Dorsey was able to grab the ball and score. The Lady Panthers had another opportunity to cut their deficit back to within seven when Goodman was fouled, but she missed both free throws. CCHS went on to score the final four points of the game and secured its 54-41 second round victory.

The Lady Razorbacks will now advance to the Class AAA state quarterfinals to take on Sonoraville.

Lady Hurricanes Combine for 34 Runs in sweep of Albany State