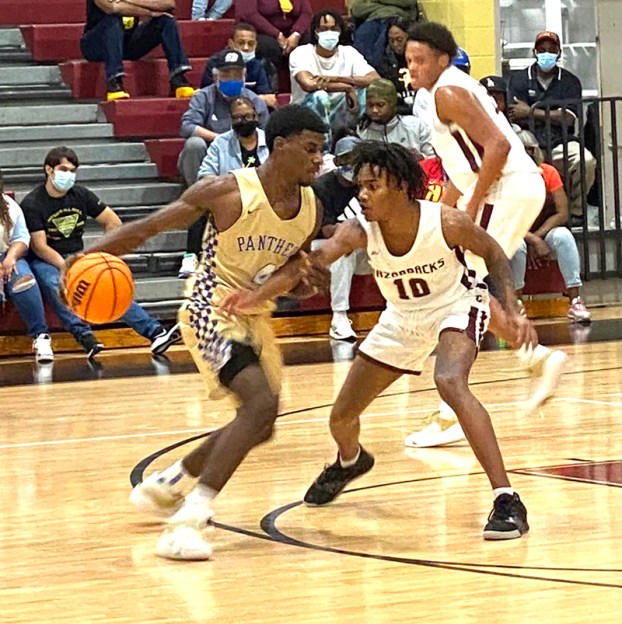 Panthers’ season comes to an end with loss to Cross Creek

AUGUSTA – After seeing the Americus-Sumter Lady Panthers lose to Cross Creek (CCHS) in the second round of the state playoffs, the ASHS boys basketball team wanted desperately to avoid the same fate when they took on the 21-4 Razorbacks of Cross Creek on Saturday, February 27, at the CCHS gymnasium. The game was a hard-fought, back-and-forth battle between both teams the entire way. However, the Panthers missed some easy baskets down the stretch and failed to block out CCHS 6’6 senior power forward Corey Trotter in the fourth quarter. As a result, Trotter was able to score some key baskets down the stretch to help the Razorbacks earn a 60-52 victory over the Panthers.

With the loss, ASHS concludes its season with an overall record of 16-5, while the Razorbacks improve to 22-4 and will advance to the GHSA Class AAA state quarterfinals.

Trotter led all scorers with 24 points on the night, but according to ASHS Head Coach Johnny Genwright, the Panthers were able to contain Trotter for most of the game. However, Trotter scored 12 of his 24 points in the fourth quarter to help seal the victory for CCHS.

“We contained #15 (Trotter), but right at the end, we had a couple of missed key assignments,” said Genwright. “We missed a box out and he got a rebound and scored. We missed a lot of easy baskets down the stretch and we committed turnovers down the stretch. The guys played well, but right there was the turning point and they (CCHS) had a little run and their offensive rebounds bit us in the butt today.”

In addition to Trotter, two other Razorbacks scored in double figures. Richard Visitacion poured in 18 points and Devin Pope scored 12, with nine of his points coming on three three-pointers.

As for the Panthers, they were led in scoring by D.J. Hurley, who had 10 points on the night. Brandon Pope chipped in eight points, with six of those points coming on three-pointers in the fourth quarter. Keldrick Flemming and Ty’Quan Robinson each scored six points and both Cameron Evans and Kyric Davis each chipped in five for the Panthers in the losing cause.

CCHS jumped out to a 7-2 lead to start the game, but the Panthers went on a 5-0 run, which was capped off by a three-pointer from Ty’Quan Robinson. Robinson struck again with another three-pointer shortly thereafter and the Panthers had a 10-7 lead in the closing minutes of the first quarter. Then as the seconds were ticking down to end the quarter, John Monts drilled a three-pointer to give the Panthers a 13-7 lead.

During the first couple of minutes of the second quarter, ASHS jumped out to a 17-9 lead, but the Razorbacks reeled off seven unanswered points to come within one at 17-16. Both teams would trade baskets over the next minute until Genwright called a timeout with 1:48 to go before the half with ASHS leading 20-18.

In the waning seconds of the first half, the Panthers had a 22-18 lead, but CCHS guard Devin Pope hit back-to-back three-pointers to close out the half and gave the Razorbacks a 24-22 halftime lead.

During the first three minutes of the third quarter, both teams traded baskets, but

Devin Pope drained another three-pointer to give the Razorbacks a 29-27 lead. CCHS then went on an 11-7 run before D.J. Hurley drained a three-pointer to bring ASHS to within three at 40-37 with eight more minutes left to decide the Panthers’ season.

Like most state playoff games, the winner of this game would be the team that made the most offensive and defensive plays down the stretch, limited its turnovers and made its free throws. Unfortunately for the Panthers, they were on the wrong end of those categories.

Trotter made one of two free throws to give CCHS a 41-37 lead early in the fourth quarter. However, Trotter was able to rebound his own miss on his second free throw attempt and scored to give the Razorbacks a 43-37 lead. The Panthers, however, were able to respond with a 6-2 run that was capped off with a jumper from Hurley with 4:58 to go, brining ASHS to within two at 45-43. At this point in the game, Genwright called a timeout to set up his defense.

Out of the timeout, the Panthers were able to get a stop and tied the game at 45-45 on a jumper by Brandon Pope. However, Trotter got a rebound off a missed shot and scored to reclaim the lead for CCHS. Through much of the second half and especially in the fourth quarter, the Panthers struggled to stop Trotter on the inside.

However, Brandon Pope responded again for the Panthers by drilling the first of his two three-pointers on the night and ASHS trailed 49-48 with 2:37 to go. However, the Razorbacks responded as Visitacion hit a three-pointer that rolled around the rim and in to give CCHS a 52-48 lead. On the Panthers’ next possession, they nearly turned it over and had to call another timeout with 1:50 to go in the game.

However, Trotter struck again as he got another offensive rebound and scored. Having been fouled on the play, he made the free throw to complete the three-point play, giving the Razorbacks a 55-48 lead with a little over a minute left. Time was running out on the Panthers and they would need a big response to keep their season alive.

Brandon Pope was able to respond with his second three-pointer, bringing ASHS to within four at 55-51. Unfortunately for the Panthers, that would be as close as they would get the rest of the way and CCHS would advance to the state quarterfinals with a 60-52 victory.

CCHS will continue on to the quarterfinals of the GHSA Class AAA State Tournament and will face LaFayette, who defeated Greater Atlanta Christian 63-54.

AUGUSTA – The Americus-Sumter Lady Panther Basketball Team and Head Coach Sherri Harris (ASHS) knew they were in for a... read more