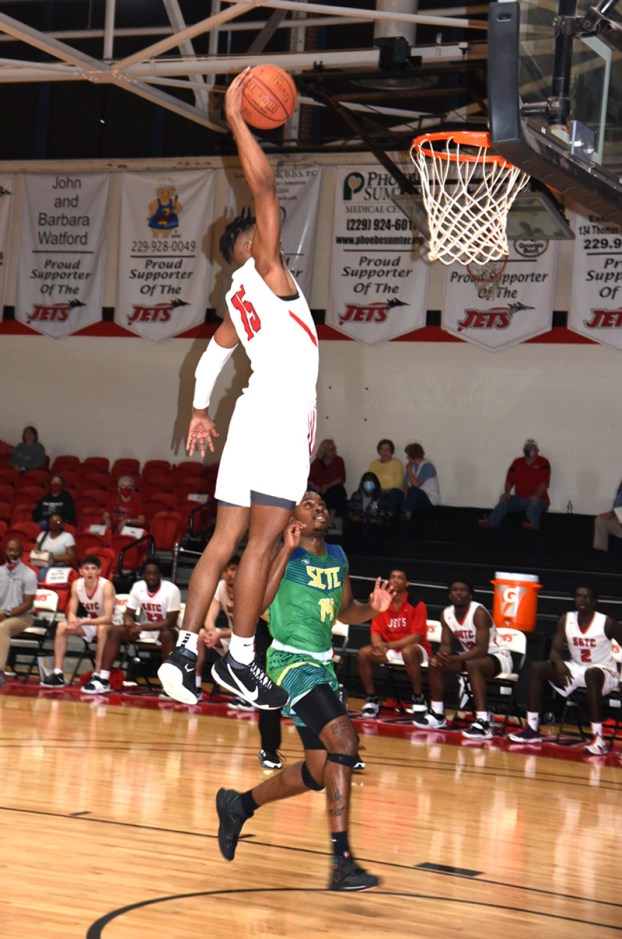 AMERICUS – The South Georgia Technical College (SGTC) Jets and Lady Jets basketball teams both added wins to their records over the weekend. The Lady Jets earned an impressive 79 – 38 victory over New Horizon Prep after their game with Wallace State was cancelled.  Then the Jets earned a hard-fought 85 – 81 double-over-time victory over Southern Crescent Technical College in a Georgia Collegiate Athletic Association (GCAA) match-up in the Hangar.  The Lady Jets are 12 – 1 overall and 6 – 0 in the conference.  The Jets are 8 – 5 overall and 6 – 1 in the GCAA.

The Lady Jets and Georgia Highlands are currently tied for first place in the GCAA with identical 6 – 0 conference records and they will go head to head on Tuesday at 5:30 p.m. in the Hangar.  Then the Lady Lets will travel to Rome on Friday and Saturday for rematches.  The Jets are currently tied for second place in the GCAA with South Georgia State College behind Albany Tech.  SGTC and South Georgia will meet at 7 p.m. in Waycross on Thursday, March 4th after the Jets travel to Griffin for a rematch with Southern Crescent Tech on Tuesday, March 2nd, at 7 p.m.  The Jets next home game is  Saturday, March 6th at 3 p.m. against South Georgia State.

“It was a good game,” said South Georgia Technical College interim Jets head basketball coach Chris Ballauer, after his team had to come from behind to clinch the double-overtime victory.  “We did not shoot the ball very good, but we made some shots when we needed them.  None were bigger than Jordan Stephens’ three late in the game.  We will make some adjustments for the game Tuesday and hopefully we can handle things in regulation.” 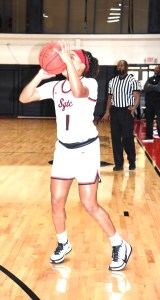 “We need to play better than we did Saturday to win against Georgia Highlands,” said Coach Frey.  “We are still not doing the things we need to be doing to win against better teams.  We only shot 25% from the three-point line and our inside game is not where it needs to be either.  We still have a lot of work to do to get where we want to be,” said Frey.

The Lady Jets were still sluggish from their loss to Jones College earlier in the week and fell behind 3 – 0 in the first few minutes.  The Lady Jets came back and outscored the New Horizon Prep squad 18 – 10 in the first quarter to pull ahead by eight.  The two teams both scored 13 points in the second quarter to end the half with the Lady Jets up 31 – 23.

South Georgia Tech held New Horizon Prep to only 15 points in the second half, while the Lady Jets scored 48 to cruise to the 79 – 38 victory.  The Lady Jets are still ranked 2nd in the nation but will probably drop several notches after their loss to the 5th seeded Jones College squad.

Only two members of the Lady Jets scored in double-figures against New Horizon Prep.  Sophomore guard Imani McNeal led the charge with 21 points.  She was three of six from the three-point line, and 50% from the field.  She was also two of two from the foul line.  McNeal added six rebounds, one assist, and six steals to her totals.

Freshman guard Maikya Simmons was the only other Lady Jet in double-figures with 12 points.  She was six of eight from the field.  She pulled down four rebounds and one steal on the night.  Sophomore guard Veronica Charles and sophomore forward Hope Butera both came away with nine points on the night.  Charles also had eight rebounds, one assist, and three steals.  Butera had seven rebounds and one blocked shot.

Freshman guard Abby Solway scored seven points, Flore Ngasamputu and Jaidyn Trevino both had six, Sarah Lwambo added four points, Femme Sikuzani and Tena Ikidi put up two points each on the scoreboard and then Niya McGuire closed out the scoring with one point.  Femme Sikuzani led the team in rebounds with nine and also had two blocked shots.

In the men’s game, the two teams appeared pretty evenly matched.  The Jets struck first, Southern Crescent came back and tied the game at 8 – 8.  The two teams battled back and forth for the first 20 minutes.  South Georgia Tech pulled ahead 25 – 15 but Southern Crescent cut that deficit and actually took a 38 – 26 lead into half-time.

The two teams appeared to be evenly matched in the second half, which saw seven more lead changes and 12 additional ties.  The Jets trailed 72 – 71 with thirty seconds left in the game.  Jalen Reynolds sank a free-throw with 14.2 seconds remaining in regulation to tie the game at 72 – 72 and then SGTC’s defense kept South Crescent from scoring and the regulation ended with the two teams tied at 72 all.

Freshman guard Marvin McGhee ended the night as the high scorer for the Jets with 25 points and also pulled down 11 rebounds.  He managed to secure five steals and four assists on the night as well. Sophomore forward Jalen Reynolds also had a double-double night with 15 points and 18 rebounds.  He also had three blocked shots and two steals.

Sophomore guard Jordan Stephens was the other Jet in double-figures with 12 points including two three-pointers.  He was also two of two from the foul line.  He also walked away with three rebounds, two assists and two steals.