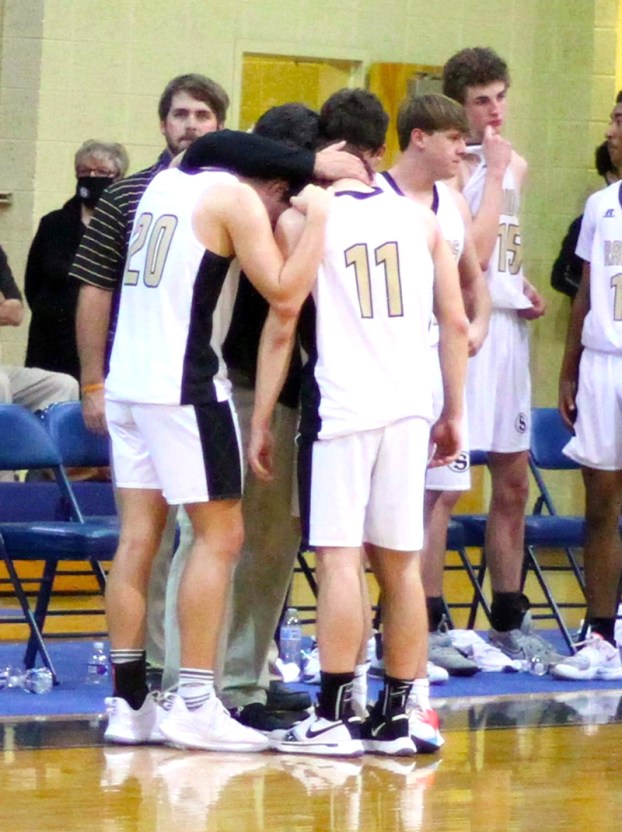 Southland Academy seniors Max Foster (11) and Owen Exley (20) console each other after the Raiders fell to Bulloch Academy 53-35 in the quarterfinals of the GISA Class AAA State Tournament. Submitted Photo

MILLEDGEVILLE, GA – The Southland Academy Varsity Boys Basketball Team (SAR) came into its GISA Class AAA state quarterfinal game against Bulloch Academy hoping to “return home” to play in the GISA Class AAA Final Four at the GSW Storm Dome, along with a chance to win the school’s first state championship in boys’ basketball since 1983. However, the Gators of Bulloch Academy (BA) had other plans. They defeated SAR 53-35 on Saturday, February 27, at John Milledge Academy in Milledgeville, thus dashing the Raiders’ dreams of winning a state championship in their hometown.

It was a disappointing end to an otherwise great year as the Raiders finish the 2020-21 season with a record of 18-5.

SAR senior shooting guard Max Foster had another outstanding game and led the Raiders in scoring with 21 points. Foster hit five three-pointers in this game, and in doing so, he broke the all-time school record for number of three-pointers made in a career (172). The previous SAR record of 169 three-pointers in a career was held by former Raider standout Alex Roach.

Unfortunately for the Raiders, they struggled with the taller front line of the Gators. SAR did not shoot the ball well as a team in this game and scored its lowest output of the year.

For Foster, Owen Exley and Nathan Duke, Saturday’s state playoff game will be the last game the three SAR seniors will play in as Raiders.

“Those seniors made us go this year. They had a great four-year career,” said SAR Head Coach Rundy Foster. “I am so grateful for this basketball season. 18-5 is nothing to be ashamed of. Not only that, but the way they carried themselves throughout the season made me proud. They were a joy to coach. We will miss Max, Owen, and Nathan very much. They were a special three to me. Their leadership was paramount to our success. I’m proud of this team.”

The Southland Lady Raiders (18-3) still have a chance to bring the school its first state championship in girls’ basketball since 1986. They will play John Milledge Academy (24-4) in the GISA Class AAA girls’ state semifinals at the GSW Storm Dome on Thursday, March 4, at 5 p.m.

From Staff Reports   AMERICUS – Sumter Cycling invites all those who love to ride their bikes to join them... read more