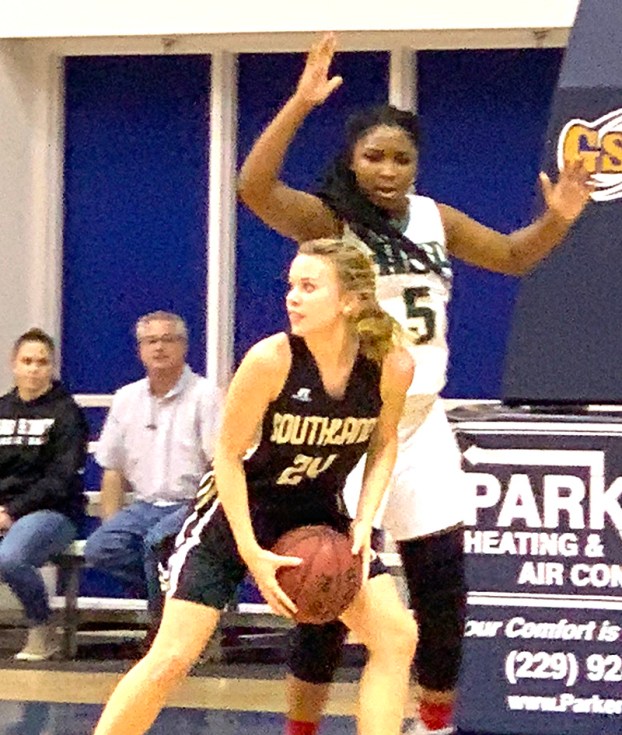 AMERICUS – Georgia Southwestern State University (GSW) will host the Georgia Independent School Association (GISA) Boys’ and Girls’ State Basketball semifinals and finals inside GSW’s Storm Dome arena from March 3-6, 2021. For the third consecutive year, the top GISA high school basketball teams in the A, AA and AAA divisions will compete for a state championship in Americus.

“Georgia Southwestern is proud to partner once again with GISA by hosting the Final Four on our campus and continuing to build on a strong relationship with a great organization,” said GSW President Neal Weaver, Ph.D. “It’s been an odd year for sports and student-athletes. We’re glad that we could provide these players a safe place to play and allow some sense of normalcy as they compete in a collegiate arena.”

Southland Academy sophomore guard Riley Mitchell competed against Valwood in the GISA Region 3-AAA Tournament, which was held in the Storm Dome two weeks ago. Mitchell, along with the rest of the Lady Raiders, will compete in the Storm Dome once again in the semifinals of the GISA Class AAA State Tournament.
ATR Archive

GSW continues to follow all USG guidelines to ensure the safety of guests and the players. All guests will be required to wear a face covering inside the Storm Dome. In addition, seating is marked off every other row to allow for social distancing.

This will be the fourth GISA tournament held in the Storm Dome this year with COVID-19 precautions in place. In February, GSW hosted both the region and state tournaments for middle school and high school wrestling, as well as the GISA Region 3-AAA Tournament for basketball.

Hosting the Final Four tournament at GSW in Americus has meant a small economic boost for local restaurants, shops, gas stations and hotels over the last three years. The City of Americus reports a steady increase in hotel/motel tax in 2018, 2019, and 2020 thanks to the GISA tournament.

The Americus Trolley, kindly provided by Downtown Americus Main Street, will once again offer guests transportation to and from downtown Americus so guests can have the opportunity to visit shops and restaurants. The tournament will also be held during the March First Friday event, Music on Main Street.

Some local restaurants have agreed to generously donate 10% of their proceeds to the GISA organization. Roman Oven on Wed. March 3 from 5-9 p.m. Pat’s Place and Carter’s Fried Chicken all day on Thurs. March 4. Farmhouse all day and La Hacienda from 11 a.m.-3 p.m. on Fri. March 5, and Farmhouse and Wok N’ Wings all day on Sat. March 6.

One local team will be represented in the GISA Final Four. The Southland Academy Lady Raiders (18-3) will take on John Milledge Academy (24-4) on Thursday, March 4, at 5 p.m.

The public is allowed to attend the games. Tickets can be purchased at the door, $15 for adults and $10 for students.