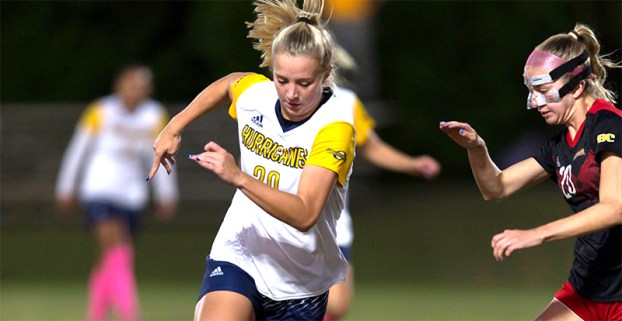 GSW sophomore forward Payton Johnson was ejected form the Lady Hurricanes’ match against Lander University for accumulating two yellow cards, which equals a red card. The Lady Hurricanes lost the match to LU by the score of 2-0. Photo by Christopher Finn

AMERICUS – A tough second-half by the Georgia Southwestern women’s soccer team saw them give up one long goal followed by a penalty kick as Lander University (LU) won 2-0 over GSW in the Peach Belt Conference match Monday evening, March 1. The Lady Hurricanes played with just 10 players during the last 30 minutes of the game due to a red card.

GSW (0-3-0 PBC) and LU (1-2-0 PBC) traded shots during the first half, with the Bearcats taking a 7-6 lead in shots to end the half. Four minutes into the second half, GSW sophomore forward Payton Johnson received a yellow card with a sharp blow to a Bearcat defender. Ten minutes later, the referees pulled another card on Johnson, pulling her out the game with 30 minutes remaining in the match.

LU quickly noticed the mismatch and took advantage of it. In the 67th minute, Kelcie Fisher got away from a Lady Hurricane defender and scored the Bearcats’ first goal on a shot right over the goalkeeper’s hand and into the net for a 1-0 lead. Seven minutes later, GSW was hit with a penalty kick, which LU converted for a 2-0 lead.

Jade Maldonado led GSW with two shots on goal, followed by Reilley Bain, who also finished with two shots. GSW could only put up four second-half shots for a total of 10, while LU had 21 shots. The Bearcats also took an 8-6 shot on goal advantage. Both goalkeepers finished with six saves on the day.