At least twice during the Great Depression, Charles Monroe Hale Jr. boarded a plane and, circling Americus, photographed the city from above. Hale aimed his camera at the downtown business district, a section of N. Lee Street, and his home along Church Street. He photographed the water tower on Lamar Street, then under construction by the World Progress Administration, as well as the word AMERICUS painted in white letters on the roof of the Allison Building in 1936. His photographs also captured several examples of new businesses – filling stations – that began arriving in the city in 1917. These places represented important changes to Americus, the country, and the world.

Gas stations and automobiles, even more than airplanes, transformed daily life in the twentieth century. On the one hand, it is easy to look on old utilitarian properties as eye-sores or, considering leaking petroleum tanks, public health hazards. On the other hand, there exists great nostalgia for early automobiles and the places that serviced them. Filling stations offer a useful reminder that properties do not have to be “cute” to have historical value. 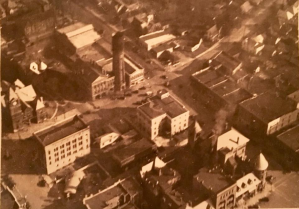 Filling Stations in the United States

Stand-alone filling stations marked a response to rising demand for gasoline amid the mass production of automobiles. Before pumps and specialized retail outlets, merchants poured fuel from cans straight into tanks at blacksmith shops, hardware stores, or anyplace that also sold kerosene. Drive-through stations emerged in the 1910s amid increased competition after the United States government broke up Standard Oil Company into 34 smaller companies. While the accolade of “first” filling station is disputed, these buildings had emerged by 1913. The Ford factory could produce 1,000 automobiles per day that year and the need for gas kept pace.

The number of filling stations skyrocketed until the Great Depression. By 1920, there were 15,000 stations in the United States. Ten years later there were 120,000. As stations proliferated, they became more specialized. In the early 1920s, about half of all gasoline sold still came from outlets, like hardware or grocery stores, that sold – but did not exclusively specialize in ­­– gasoline. By 1930, filling stations sold more than 90% of all automobile gasoline. The number of gas stations peaked around 220,000 in 1970 and has decreased in the past half-century. While there are ten times as many cars in the United States as there were in 1930, there are fewer gas stations now than 90 years ago.

As commercial and functional buildings, filling stations evolved as artifacts of business strategies and consumer habits. The “service” station, in contrast to the more limited “filling” station, offered a broader array of automotive skills and expertise. As gasoline companies vied for customers, they developed specialized signs to catch the eyes of passing motorists and sought to one-up each other with customer perks. New filling stations lured customers with restrooms. When restrooms became a consumer expectation, gas companies bragged about having clean restrooms. Chain gas stations offered free travel maps and novelty items for decades. These giveaways disappeared during the oil crises in the 1970s and never returned. Filling station architecture changed too. Increasingly attached to convenience stores, they became bigger, more efficient, and more impersonal.

Automobiles competed with horses, mules, and oxen in the streets of Americus by 1910. A special issue of the Americus Times-Recorder in 1912 boasted about the businesses that took care of the “autocrat of the highway.” At the time, there were 200 automobiles in the county serviced by “five plants,” including “the Rylander, the Stapleton, the Stratham, the Jacobs, and the Americus Machine Co.” There was not a specialized filling station for another five years.

When the first filling station came to Americus, it made local news. “The structure will be of brick, one story high, 30 x 80 feet and practically fireproof,” the Times-Recorder reported. “The driveway will be of concreate and a shed will be built over this while the roofing will be of metal.” A special waiting room for patrons sat adjacent to the manager’s office. The newspaper interpreted Standard Oil Company’s filling station and its design as a sign of the relative importance of Americus. “The Standard Company is building similar filling stations in many cities throughout Georgia, the one here is being patterned after those erected in other cities of relative importance.”

Competitors soon joined Standard Oil Company. Two years after the first filling station arrived, the Gulf Refining Company built the second station on the same block – back to back with Standard Oil. The Gulf Station had two 550-gallon tanks “each fitted with a 5-gallon stroke pump.” Services also included oil, air, and water. “The station is to be very ornamental in design and construction,” the Times-Recorder reported, “and, in addition to the service features, will be fitted with a ladies rest room.”

The pace of construction picked up in Americus in the 1920s as it did elsewhere. The Texas Company opened a filling station at the southwest corner of Lamar and Hampton in the present-day parking lot of Habitat for Humanity. George Oscar Loving, a businessman and a former Texaco agent, built his own gasoline tanks on Hill Street by 1921. He soon opened his first filling station on the northwest corner of Lee and Church Streets. In May 1922, Loving showed the blueprints to a local women’s club. Anna Grubbs described the building as having “white-faced brick and black mortar with a roof of black painted metal extending 28 feet over both driveways.” Inside the office would be “beaver board finished in ivory and blue-gray.” An arched, concrete driveway connected the filling station to Lee and Church Streets. All materials – and all the oil – came from Georgia.

Loving established a new trend in local filling station construction. While many filling stations were built in the heart of the business district, others came to inhabit transitional spaces between commercial and residential areas. At the intersection of Lee and Church Streets, Howell’s Service Station followed on the NE corner. When Amoco arrived on the SW corner, the Methodist Church became the only building on that corner not selling a fossil fuel. By the time Hale photographed the city from the air, there were twenty filling stations in Americus. 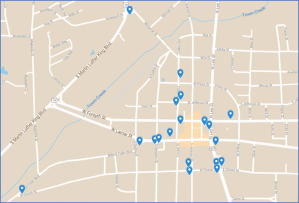 Historic filling stations pose unique challenges and opportunities for preservation in the twenty-first century. Few, if any, can become museums like the Billy Carter Filling Station in Plains. The best-case future is adaptive reuse: modernizing the buildings while retaining as much historic integrity as possible. There are more than 200,000 vacant gas stations in the U.S. today. They are often small, well-located for parking or pedestrians, and come with existing infrastructure. “Gas stations are ideal for reuse,” historian Kathy Martinolich writes. “Their building and lot sizes make them less daunting projects for potential developers and lowers project costs overall, from acquisition to remediation.” There are also environmental concerns. Most gas stations fall under what are called “brownfield sites,” but as Martinolich points out, “there is a process – and funding – in place to help with petroleum brownfields remediation.” 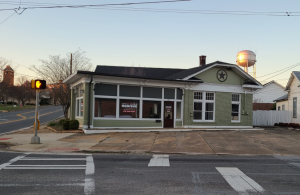 Across Lee Street from Discount Tobacco is perhaps the best-preserved gas station and the clearest local example of adaptive reuse. Sumter Oil Company first put the filling station at 142 S. Lee Street in 1927. A decade later, it was Howell’s Service Station. Although the tax assessor describes the building as built in 1950, it is likely a heavy remodeling of an earlier house-with-canopy-style building. The property made a successful come back in recent years as mixed-commercial space. It was once Sweet Georgia Baking Co.; it is now Middle Georgia Roofing. The building’s look, feel, and even its orientation to the intersection recalls a time when it served gasoline. It that way, it retains both the tangible elements and intangible feeling of the city’s past.