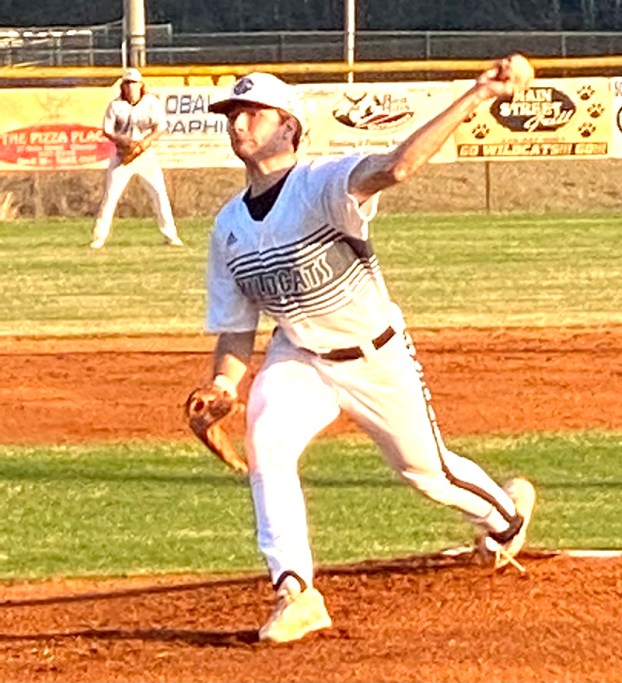 Schley County starting pitcher Trypp Lumpkin struck out six batters over five innings of work in the Wildcats’ 1-0 loss to Worth County. Photo by Ken Gustafson

Schley County Wildcats fall to Worth County in pitchers’ dual

ELLAVILLE – After getting swept in two games by Perry High School 10-2 and 15-4 last week, the Schley County Wildcat Baseball Team (SCHS) came into Monday’s non-region contest against Worth County (WC) hoping to get back into the win column. However, even though SCHS starting pitcher Trypp Lumpkin turned in an outstanding pitching performance against the Rams, the Wildcats simply could not come up with any offense and only had four hits in the contest. The lone decisive run of the game came in the top of the third inning when WC pitcher Griffin Melton drove in Christian McDonald on an RBI single. Melton was able to hold the Wildcats scoreless for six innings.  The Wildcats had a runner in scoring position with two outs in the bottom of the seventh with Luke Pawlowski at second, but WC reliever Worth Smith was able to strike out Cody Betts to end the game and hand the Wildcats (7-3) their third straight loss.

While he was pleased with Lumpkin’s performance on the mound, SCHS head coach Chuck Cheek was extremely disappointed in the fact that his club got shut out on the scoreboard.
“That’s just a very poor offensive performance from us,” said Cheek. “We hit the ball better than that in practice. We’ve just got to hit it better in the game. There really isn’t any excuse for us to come out here and drop a doughnut on the scoreboard in seven innings. We expect more of ourselves than that and we’ve got to get back to work.”

SCHS right fielder Owen Lamb had the best offensive output as he went 2 for 3 at the plate with two singles and a stolen base. Left fielder Tucker Welch and catcher Jack Clark got the other two hits for the Wildcats. 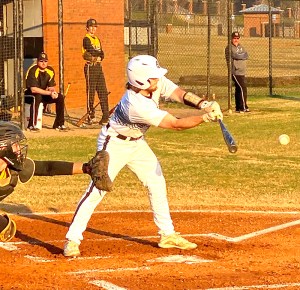 Schley County centerfielder Luke Renfroe tries to get the bat on the ball against Worth County starting pitcher Griffin Melton.
Photo by Ken Gustafson

In the bottom of the first inning, the Wildcats had a chance to score when with two outs, Lumpkin drew a walk and Tucker Welch singled, but on Welch’s single, Lumpkin was thrown out while trying to reach third base.

In the bottom of the second, Jack Clark led off with a single, but was thrown out trying to steal second. Later in the inning with two outs, Owen Lamb singled and Luke Pawlowski drew a walk to out runners at first and second, but Melton was able to pitch his way out of the jam when he struck out Carson Westbrook to end the threat.

The Rams scored the only run of the game in the top of the third inning. Christian McDonald led off the inning with a single and Camryn Lewis reached on a fielder’s choice. However, Lewis was able to advance all the way to third on a throwing error. That paved the way for Melton to drive in Lewis on an RBI single. That would be all the scoring the Rams would need to seal the victory.

In the bottom of the fourth inning, the Wildcats had another chance to tie the game as Owen Lamb singled with two outs and stole second base. However, Melton was able to strike out Pawlowski to end the threat. Then in the bottom of the seventh inning, the Wildcats would have one last chance to tie or win the game. With two outs, Pawlowski was able to draw a walk off WC reliever Worth Smith. Pawlowski would later advance to second on a wild pitch, putting the tying run in scoring position. Unfortunately for the Wildcats, Smith was able to strike out Cody Betts to end the game.

Chip Cooper led the Rams’ offense by going 2 for 3 at the plate with two singles.

In six innings of work, WC starter Griffin Melton pitched six scoreless innings, giving up four hits and striking out three. Worth Smith came on in relief of Melton and struck out three batters to seal the win for WC. With thw win, the Rams improve to 6-1 on the season.

The Wildcats (7-3) will try to stop their three-game losing streak when they host Stewart County in a doubleheader on Tuesday, March 9. The first pitch of Game 1 is scheduled to be at 4 p.m.

By Su Ann Bird   ROME, GA – It was a very tough weekend for the South Georgia Technical College... read more