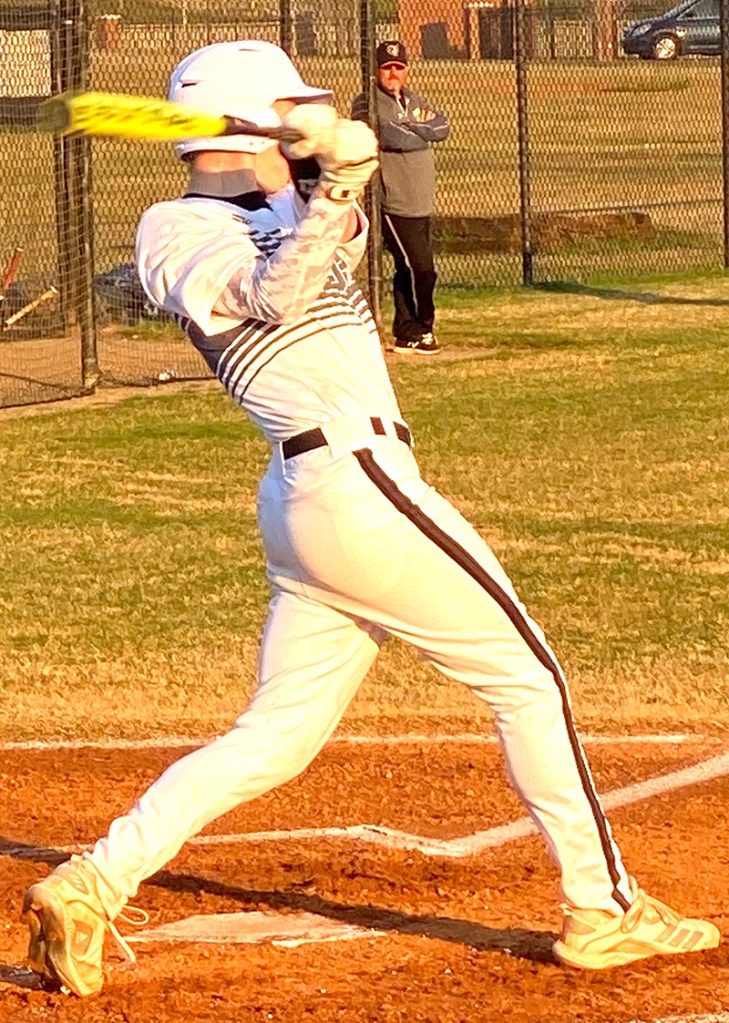 Schley County shortstop Dylan Taylor hit a three-run homer in the bottom of the seventh inning to bring Schley County within two runs of Tiftarea Academy. However, the Wildcats fell to the Panthers 6-4. ATR Archive

ELLAVILLE – After sweeping Stewart County 15-0 and 13-0 in a doubleheader on Tuesday, March 9, the Schley County High School Baseball Team (SCHS) was hoping to keep its winning streak going with a win over the Panthers of Tiftarea Academy (TA). However, the Panthers jumped out to an early 6-0 and though the Wildcats were able to get to within two runs in the bottom of the seventh on a three-run home run by Dylan Taylor with two outs, TA relief pitcher Jam Presley was able to get Tucker Welch to ground out to third to end the game and secure a 6-4 win for the Panthers over the Wildcats on Wednesday, March 10, at Schley County High School.

The Panthers scored two runs in the first and four in the second to take a 6-0 lead, but the Wildcats began to climb back into it when they scored one run in the bottom of the sixth on an RBI single by Welch. After holding TA scoreless in the top of the seventh, SCHS made a bid for a come-from-behind victory in the seventh. With one out, Luke Pawlowski was hit bay a pitch from TA pitcher Jayk Sailer. Cody Betts then singled to right field, putting runners at first and second for the Wildcats with one out. After Luke Renfroe grounded into a fielder’s choice for the second out, Taylor belted a three-run home run over the right field wall to bring the Wildcats to within two at 6-4. A pitch from Sailer then hit Trypp Lumpkin and Welch came to the plate as the tying run with two outs. Unfortunately for Welch and the Wildcats, he was not able to come through as he grounded out to third base to end the game.

Renfroe had the hot bat for the Wildcats in this game. He went 2 for 4 at the plate with two singles. Welch, Betts, Jack Clark and Athon Hines each had one single in the ball game and Taylor’s only hit of the game came on the three-run homer in the seventh.

Owen Lamb started on the mound for the Wildcats. While he did strike out seven TA batters in three innings of work, he gave up six runs on five hits and walked two. Hines came on in relief of Lamb and, other than waling six batters, had a good outing. He pitched four scoreless innings and gave up only one hit while striking out five.

Brock Hammond led the Panthers’ offense by going 2 for 4 at the plate, but Logan Moore and Ben Matt each doubled and drove in a combined three RBIs for TA.

Hayden Murphy started on the mound for the Panthers and had a dominating performance. In five innings of work, he gave up one run on three hits, walked one and struck out eight Wildcat batters.

With the loss, the Wildcats fall to 9-4 on the season, while the Panthers claim their second victory of 2021 and improve to 2-3.

The Wildcats will have two days off before they travel up to Perry, GA to take on Westfield on Saturday, March 13, at 4 p.m.