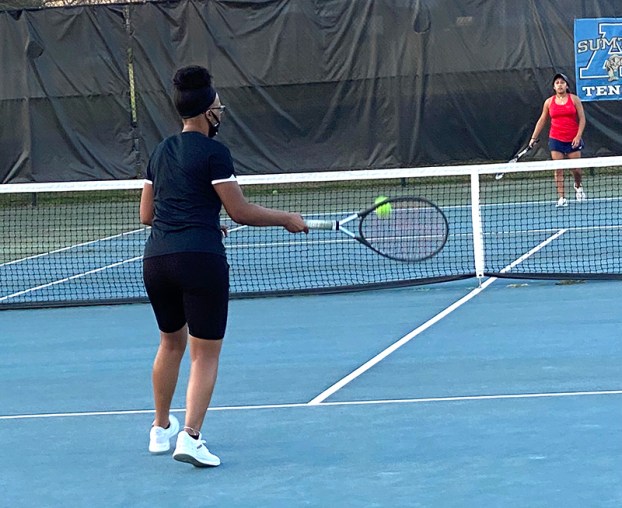 AMERICUS – The Americus-Sumter (ASHS) Panthers and Lady Panthers tennis teams both earned a big Region 2-AAA victory over Jackson on Thursday, March 11, at the ASHS Tennis Complex.  Both teams were able to dominate the JHS teams by team scores of 4-1.

In girls’ action, the Lady Panthers’ #1 player, Teigan Pepito, lost to Maggie Shields 4-6, 6-3 and 2-6, but ASHS was able to rebound when Rebeccah Ingle defeated Erin Thompson in straight sets 6-2, 6-1.  From that point on, the Lady Panthers dominated the rest of the team match.  Alesiah Holmes had to win a difficult first set against Faith Hindman 9-7, but won the second set 6-4 to win her match.  The Lady Panthers had taken two of three matches in girls’ singles action.

In doubles action, the ASHS duo of Trinity Gilliam and Melanie Wooden defeated the JHS team of Ansley Lenning and Emily Watts in straight sets 6-0, 6-0. In the final girls’ doubles match, the Lady Panthers’ duo of Paris Eberhardt and Donesia Westbrook-Myrie had a difficult time in their match against the Lady Red Devils’ duo of Olivia Dial and Brighten Jones.  The Eberhardt/Westbrook-Myrie team lost the first set 3-6, but rebound to win the next two sets 7-5 and 6-4 to win their match and thus seal the team victory for the Lady Panthers.

Cameron Evans prepares to return a serve in his doubles match with teammate Corey Wright.
Photo by Ken Gustafson

In boys’ doubles action, the ASHS duo of James Ndaayezwi and James Schopen Davis defeated the JHS team of Michael Edmonds and Chapman Jordan in straight sets 6-4, 6-3.  The ASHS doubles team of Corey Wright and Cameron Evans lost their match to the Red Devils’ duo of Alex McCary and Connor King in straight sets 4-6, 4-6, but the Panthers had already sealed the team match.

The Panthers and Lady Panthers will hit the courts at ASHS once again on Tuesday, March 16, for another Region 2-AAA match against Crisp County at 4:30 p.m.