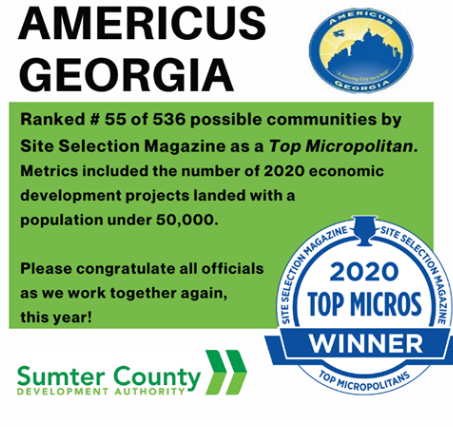 The Sumter County Payroll Development Authority (PDA) is proud to announce Americus has been named one of the nation’s Top Micropolitans. The designation is largely due to the economic development projects brought into the city.  Rusty Warner, Executive Director of the PDA is tasked with identifying potential industry and recruiting them into Sumter County. “What’s so cool about this is Americus has won it and the reason why is because of all the great new projects we have been bringing into the community. They have ranked 55 not just out of cities in Georgia but in all the cities in the United States.” A Micropolitan is a city with a population of 10,000 to 49,999. Americus is one of six cities to win the designation within Georgia. Although the designation takes a strong look at what the area is accomplishing along economic development goals, Rusty is quick to clarify the work of growing an economy belongs to the community, and not simply the PDA.

Relationships with both the city and the county are vital to economic health. “I’m really happy for the City of Americus to get this claim to fame. They are very deserving. You can’t bring projects into the community unless the city and the county back you up. What’s attractive is when you can introduce the mayor, council, county commissioners and walk into permits and planning and introduce them (potential business) to all the people, with everybody on the same page. That’s what makes Americus and Sumter County rise way above any other county or city.”

Rusty is not shy about identifying folks in our community who help make economic development successful in Sumter County. Americus Mayor, Barry Blount is a strong partner for the PDA. “I told Barry about it (the recognition) and he was beaming, he thought it was great. He has made the City of Americus so easy to work with and for me to get economic development projects brought in. He always makes himself available. He’s been a great partner to work with.” Of particular help is Roger Willis who works with planning and zoning as well as inspections for the City of Americus. He brags on Roger’s availability and his speed in resolving any issue a potential business might have. “I had a problem and he sat there and worked it out for me before they (potential business) ever finished the closing.” There are many issues a potential business considers before choosing a location. Just as any family would, a business will investigate community characteristics such as school performance, existing industry, community resources and crime rates. Mark Scott has proven to be a resource for Rusty to call upon. When asked to address the local crime rate for a potential industry, Rusty called our chief of police. “Mark—totally awesome—I went to Mark and he sat down and called them (potential business), talked to them and that tipped it over.” Rusty credits Chief Scott’s availability and transparency with being a critical piece of the business deciding to call Sumter County home.

Although the City of Americus is clearly important for the economic development of Sumter County, they are not the only partners the PDA relies on.  Rusty states the energy the county commissioners put into building the economy is also instrumental to seeing growth. He finds them more than welcoming to new business and considers their availability a positive in drawing industry. County employees work tirelessly and Rusty is particularly grateful for Jerry Harmon who among other things serves as the county’s fire chief. “He is the best person to work with, I can call him right now—we work so well with them.”

One of Rusty’s greatest selling points to potential industry is how Sumter County will welcome them. “They are always blown away that leaders are so invested. Building relationships makes everything work.” Rusty’s personal approach is also important. He states he always wants the “red carpet rolled out” for interested companies. “I want them to feel and know they are welcomed. I don’t want the word ‘no’ said to them, instead let’s see if we can come from a different angle and make things work.” Americus is being noticed for its success in building the economy. It is calling for strong relationships among both leaders and neighbors. While this work is consistent and often not done in the public eye, the fruits are becoming evident. Being recognized as a Top Micropolitan is but one glimpse of the accomplishments being gathered. The Sumter County Development Authority Board is made up of our neighbors: Paul V. Hall, Mike Donnelly, Teresa O’Bryant, Bill Harris, Sr. and John Shealy dedicate their time and talents for Sumter County to continue in excellence.