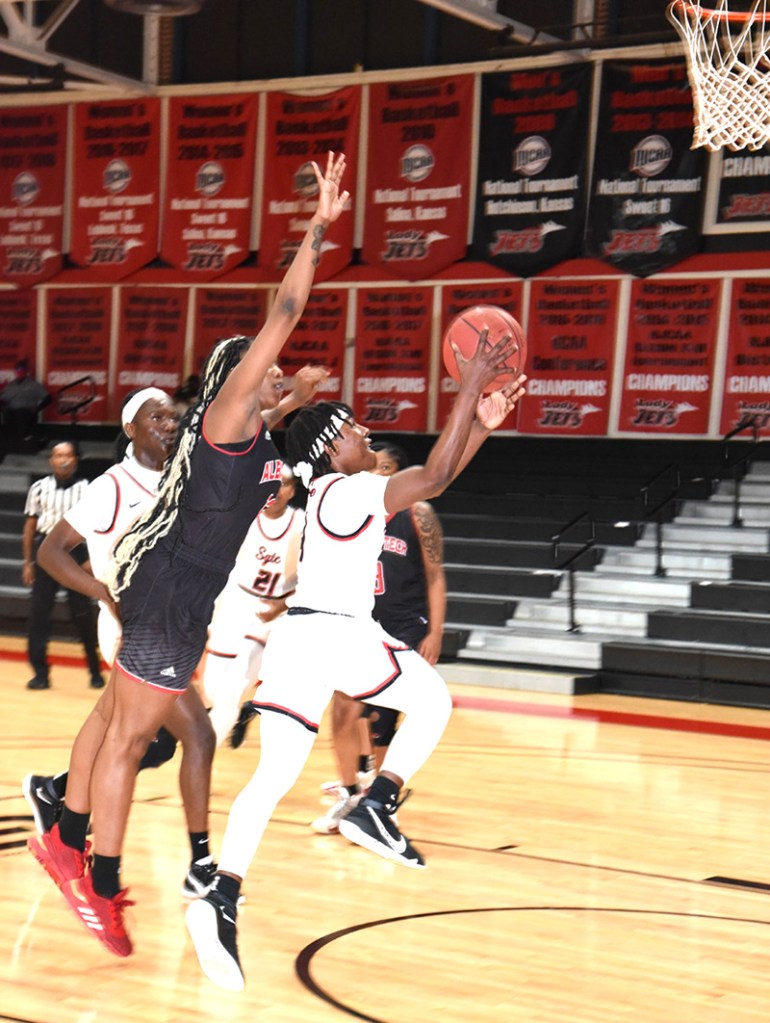 Veronica Charles (4) returned to the Lady Jets line-up on Saturday and led the team in scoring with 19 points, six steals and four assists. Photo by Su Ann Bird

AMERICUS – Despite a last-second scare, the South Georgia Technical College Lady Jets (SGTC) were able to take back-to-back wins over Albany Technical College on Thursday and Saturday.  The game Thursday in Albany was in doubt until Albany Tech’s final three-point shot bounced off the rim to allow the Lady Jets to squeak by in a 47 – 45 decision. Then on Saturday, the Lady Jets walked away with a 100 – 58 decision to move to 10 – 2 in the Georgia Collegiate Athletic Association standings and 16 – 3 overall.

“It is always good to get conference wins especially road wins, but we played really poorly on Thursday in Albany,” said SGTC head coach James Frey.  “I credit Coach Williams and his team.  They were aggressive and really started fast and got after us.  We never really got into a flow and we’re very lucky to get the win.”

A last second three-point shot by Albany Tech in Thursday’s game almost went in and that would have flipped the game in Albany Tech’s favor.  The Lady Jets struggled early in that game and were down 19 – 13 at the end of the first quarter.  A strong defensive effort in the second quarter allowed the Lady Jets to hold Albany Tech to only two points and SGTC went up 24 – 21 at the half.

SGTC expanded that lead to 37 – 33 by the end of the third quarter, but a surge by Albany Tech in the fourth quarter almost tipped the scales and the final buzzer sounded with the Lady Jets up 47 – 45.

Sophomore guard Veronica Charles sat out Thursday’s game due to an injury and the only Lady Jet to score in double figures was sophomore guard Moe Shida with 11 points.  Sophomore guard Imani McNeal and Femme Sikuzani both added eight points, Maikya Simmons seven, Flore Ngasamputu and Hope Butera, four each; followed by Niya McGuire with three and Abby Solway with two.  NIya McGuire led the team in rebounds with 15. 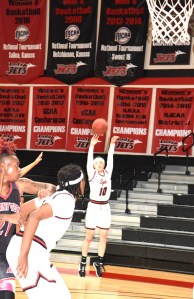 Moe Shida (10) was the only Lady Jets in double-figures in the Albany Tech Thursday game. She wound up with 11 points and four blocks.
Photo by Su Ann BirdTwo days later, the teams and the score was night and day different.  The Lady Jets scored first and often.  They were up 24 – 15 at the end of the first quarter and expanded that lead to 50 – 26 at the half.  Another strong effort by the Lady Jets in the second half allowed them to reach 100 points and take the 100 – 58 victory.

“Friday, I showed the team the first half of our Shelton State game at Shelton and I asked them where that team had gone,” said Coach Frey.  “We haven’t played well since that game.  We had a good family discussion and I completely changed the way we practice.  We went back to our pre-season schedule focusing on skill work in individual workouts and really getting after each other hard in practice for an hour or so.  We had to change the way we were preparing.  I was really pleased with our effort and intensity Saturday.  We finally look like the team that played at Shelton in January.  Hopefully, they see how pushing each other and challenging one another in practice every day will carry over into games.”

Another difference was that Veronica Charles returned to the line-up on Saturday and led her team in scoring with 19 points.  She was followed by Moe Shida with 15 points; Niya McGuire, 14; Femme Sikuzani, 12; and Abby Solway with 11 points to close out the double-digit scoring.  Imani McNeal sat out this game with an injury.

Veronica Charles led the team in steals with six.  She also had four assists, and seven rebounds.  Niya McGuire and Femme Sikuzani both pulled down 10 rebounds each for double-double efforts with their 14 and 12 points respectively.

The Lady Jets are currently second in the GCAA behind Georgia Highlands who handed SGTC their only two conference losses.  East Georgia is currently in third place with a 7 – 3 record and Albany Tech is in fourth at 5 – 8.  South Georgia Technical College will host East Georgia on Tuesday, March 16th at 5:30 and then travel to Swainsboro on Thursday, March 18th for a 5:30 rematch before East Georgia returned to Americus on Saturday at 1 p.m. for Sophomore Day.  Those three games will close out the Lady Jets regular season play.