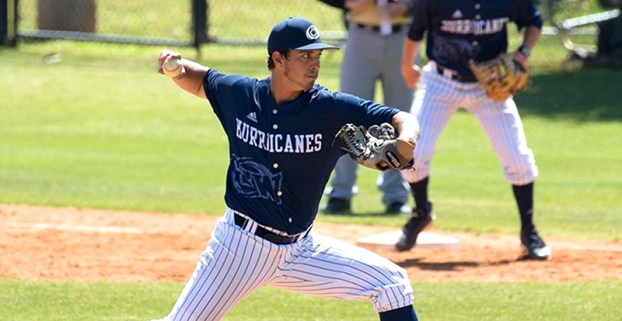 GSW senior pitcher Tucker Smith earned his third win of the season (3-1) when he gave up two runs on two hits and struck out eight batters to help lead the Hurricanes to a 14-2 victory over Augusta University in Game 1 of a three-game series this past weekend. Photo by Christopher Finn Finn

Smith, who hails from Fort Walton Beach, FL and played junior college ball at Lake Sumter State (FL) before coming to GSW, threw the first no-hitter in the Peach Belt Conference since 2017 and the first no-hitter in a conference game since 2005 as he blanked Claflin University (CU) in the series-opener. The senior hit CU’s first batter of the game, but then proceeded to set down the next 27 in order, coming that close to a perfect game. Smith issued no hits and no walks while striking out 12. It was the first no-hitter for GSW in the program’s NCAA era and he did it with 115 pitches, including 84 for strikes.

Smith earned his second Southeast Region Pitcher of the Week award on Tuesday when the NCBWA made the announcement. This is GSW’s first national weekly award.

Division II Regional Players of the Week (announced on Tuesday):

Founded in 1962, the NCBWA is dedicated to the advancement of college baseball. Membership is open to writers, broadcasters and publicists of the sport. Members receive a membership card, directory, newsletter updates and official votes in the Howser Award Player of the Year, Regional Player of the Year and NCBWA All-America voting. The NCBWA also sponsors preseason All-America awards, publication and writing contests.

Wildcats’ first inning explosion too much for Panthers

ELLAVILLE – In the top of the first inning of the rematch between the Americus-Sumter Varsity Baseball Team (ASHS) and... read more