Jets get revenge with 87 – 67 win over Albany Tech 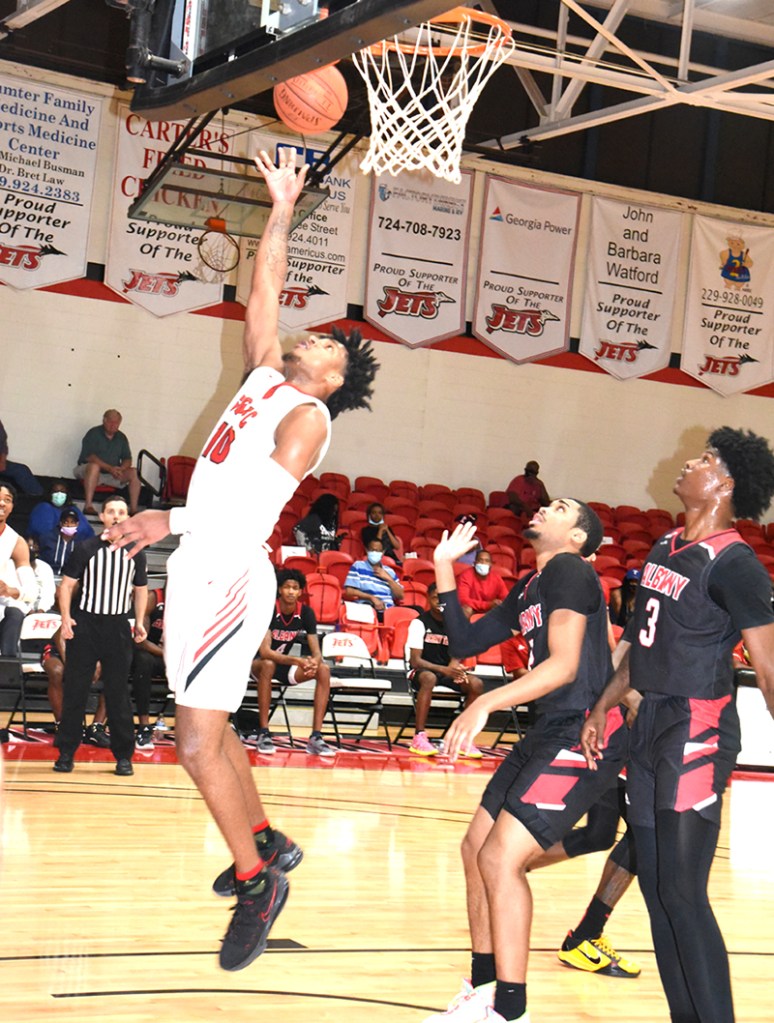 SGTC’s Marvin McGhee (10) led his team to victory over the Albany Tech Titans with 25 points and 10 rebounds. Photo by Su Ann Bird

AMERICUS – South Georgia Technical College (SGTC) men’s interim head basketball coach Chris Ballauer and his team overpowered Albany Tech’s Titans 87 – 67 Thursday night, March 18, at the Hangar to get revenge for a 70 – 66 loss in Albany on Tuesday that knocked them out of first place in the Georgia Collegiate Athletic Association (GCAA).

“I thought we played a lot better against Albany Tech than we did on Tuesday,” said Coach Ballauer.  “It was an intense game, but our players really stepped up and did what they needed to do to get back on the winning track.”

The win allowed the SGTC Jets to move into second place in the GCAA with a 9 – 3 record.  They are now 11 – 7 overall.  Georgia Highlands College is currently in first place with a 9 – 2 record.  Their losses were to SGTC and South Georgia State College.  The Chargers still have to play East Georgia, Central Georgia Tech and Andrew College.  The Jets are hoping one of those teams will pull an upset on the Charges, which would put them back into first place.  SGTC still has two games to go against Gordon Junior College and two against East Georgia State on its schedule.

South Georgia State College is currently in third place with an 8 – 3 record and Albany Tech fell to fourth with an 8 – 4 record after Thursday’s game.  Central Georgia Tech is currently fifth with a 7 – 7 GCAA season followed by Southern Crescent Tech (4-7), Gordon (4-8), East Georgia (3-10) and Andrew (2-10).

Freshman guard Marvin McGhee of Atlanta was on fire against Albany Tech in the Hangar Thursday night.  He led the Jets with 25 points.  He was three of six from the three-point line, seven of 11 from the field and hit eight out of nine free throws.  He also had 10 rebounds, five assists, and two steals.  He had 17 of his 25 points at the end of the first half.

Albany Tech jumped out to a lead in the first half, but South Georgia Technical College rallied and managed to come from behind to go up by 13 points with 11:12 remaining in the half.  The Jets never looked back and were up 38 – 30 at the end of the first half.  They outscored the Titans 49 – 37 in the second half to clinch the 87 – 67 victory.

Joining Marvin McGhee in double figures was sophomore guard Jordan Stephens from Macon with 17 points.  He also had four rebounds, two assists, a blocked shot and two steals.  Sophomores Jalen Reynolds and Tobais Long both added 13 points to the total.  Reynolds also had a double-double night with 15 rebounds.  He also added two blocked shots and one steal.  Long had three rebounds and two assists.

Matija Milivojevic started for Will Johnston, who was out with an injury, and tossed in nine points.  Nikola Sasaroga had four, and then Keundre Campbell, Kadeem Wilks, and Radim Havel closed out the scoring with two points each.

Saturday closes out the regular season for the Lady Jets.  The quarter-final round of their NJCAA Region XVII tournament will begin on March 30.  At this time the semi-final and finals are set to be played at Georgia Highlands on April 2nd and 3rd.

The Jets will travel to Gordon on Tuesday, March 23th and then to Swainsboro on Thursday, March 25th.  They play their last regular season game at home on Saturday, March 27th at 3 p.m. against East Georgia State College.