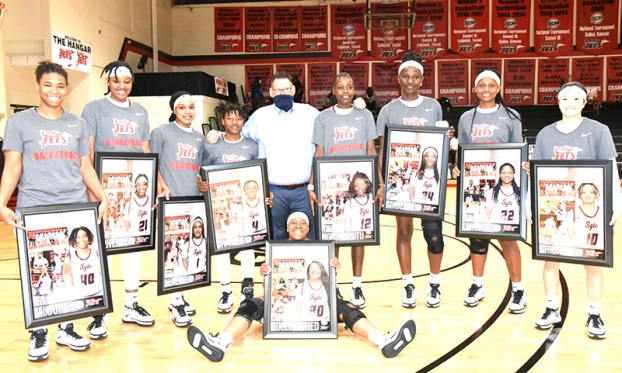 AMERICUS – South Georgia Technical College (SGTC) honored 13 sophomore players as part of their Sophomore Day celebration in-between the Jets and Lady Jets basketball double-header on Saturday, March 20, at the Hangar.  The Lady Jets were able to close out the regular season with their sixth consecutive win in a 71 – 63 decision over East Georgia State College, while the Jets came up two points shy in a match-up with Gordon College to drop to third place in the Georgia Collegiate Athletic Association (GCAA) standings.

“I would like to thank everyone who came out to honor the 2020 – 2021 sophomore members of the South Georgia Technical College Jets and Lady Jets basketball teams,” said SGTC Athletic Director and Lady Jets head coach James Frey.  “We honored 13 outstanding ladies and gentlemen for their efforts on the court and in the classroom.  This has been a different season from anything we have seen before. These young men and women need to be congratulated and honored for the way they have responded to all the challenges that no other team in the history of our program have had to overcome. I am very proud of each and every one of our players.”

Jets interim head coach Chris Ballauer and his wife, Ivy, are shown above with the Jets sophomores: Nikola Sasarog, Tobais Long, and Jordan Stephens and his family members including his parents Georglyn and Anthony Stephens and his sisters Kennedy, Kaelyn and Kandace Stephens and sophomore Jalen Reynolds with Coach Ballauer’s daughter, Layla and son, Hutch.
Photo by Su Ann Bird

Coach Frey was pleased that the Lady Jets were able to close out the regular season with back to back wins over the East Georgia College Lady Bobcats.  The Lady Jets traveled to Swainsboro on Friday night and managed to take a narrow 63 – 62 come from behind win against East Georgia before facing them again on Saturday and securing a 71 – 63 victory on Sophomore Day.

“I was pleased that we came back and won on Friday night, but Saturday, we were up by 24 points before we relaxed and let them get back in the ball game,” said Coach Frey.  East Georgia came within three points (64-61) with three minutes remaining in the game before the Lady Jets rallied to outscore the Lady Bobcats 7 – 2 in the final minutes and capture the 71 – 63 victory. 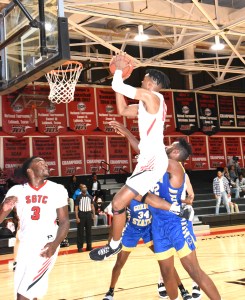 SGTC sophomore guard Jordan Stephens (15) tossed in 21 points to be the leading scorer for the Jets against Gordon College.
Photo by Su Ann Bird

In the tournament quarterfinals, the third place East Georgia team will host sixth place Andrew College and Albany Tech will host Central Georgia Tech on March 30th to determine who will advance to the semi-final round.  Georgia Highlands will play the winner of the Albany Tech – Central Georgia Tech game and SGTC will face the winner of the East Georgia – Andrew College game in the semi-finals.

“The season starts over now,” said Lady Jets head coach James Frey.  “This is what we have worked for all season long.  We play and we win or we go home.”  The Lady Jets are currently ranked 8th in the nation and have won the GCAA conference for the past four years and have advanced or qualified to go to the NJCAA national tournament for the past four consecutive years and six times in the last seven years.  The Lady Jets will need to win their semi-final game and the final game to earn the right to advance to the Southeast regionals and finally to the national tournament in Lubbock, Texas for the fifth consecutive season.

The Lady Jets did manage to win three games again East Georgia but the Lady Bobcats almost upset the Lady Jets in Swainsboro.  The Lady Bobcats went up 22 – 17 at the end of the first quarter and still had a 31 – 29 lead at the end of the first half.  East Georgia stretched their lead to 10 points going into the fourth quarter, but a strong showing by sophomore guard Kamya Hollingshed, who hit five three pointers in the final 10 minutes to lift her team to the 63 – 62 victory.

Kamya Hollingshed has been out for most of the season after having her second knee surgery.  She took to the court for the first time this season in the initial match-up with East Georgia on Tuesday.  She made the most of her return in the second game with her three-point shooting that allowed her to be the high scorer with 15 points.  She also had two rebounds and two steals.  Sophomore Veronica Charles was the only other player for the Lady Jets in double-figures with 10 points.  She walked away with six rebounds, six assists, and three steals.

Sophomores Moe Shida and Niya McGuire both contributed nine points, followed by Sarah Lwambo and Femme Sikuzani who had six points each.  Imani McNeal and Abby Solway scored three points each and Flore Ngasampuu, and Tena Ikidi closed out the scoring with one point each. 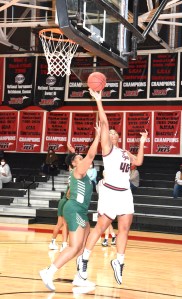 Less than 24 hours later the two teams had a rematch in Americus for sophomore day and the Lady Jets started off on fire.  They were up 36 – 19 at the half and were still up 59 – 40 at the end of the fourth period.  But in the fourth quarter East Georgia rallied to outscore the Lady Jets 23 – 12 before SGTC closed the night with the 71 – 63 victory.

Sophomore forward Niya Mcguire led her team with 20 points and she was followed by Moe Shida who added 13 points and Veronica Charles and Femme Sikuzani who both contributed 10 points each.  Maikya Simmons walked away with four points, Kaidyn Trevino and Kamya Hollingshed had three each and then Imani McNeal, Sarah Lwambo, and Tena Ikidi each contributed two points.  Abby Solway and Hope Butera closed out the scoring with one point each.

The Jets came out after the Lady Jets and the Sophomore Day recognition and looked like they were on the way to a victory before East Georgia scored eight points with 1:16 remaining in the game to take the 85 – 83 decision.  The Jets dropped to third place in the GCAA with a 9 – 4 conference record behind Georgia Highlands and South Georgia State College.  The Jets are followed by Albany Tech, Central Georgia Tech, Southern Crescent Tech, Gordon, East Georgia and Andrew College in the standings.

Sophomore guard Jordan Stephens led the Jets in scoring in that match-up with 21 points flowed by Marvin McGhee with 17.  Jalen Reynolds had 11 points and 10 rebounds on the night with limited play due to foul trouble.   Tabais Long accounted for nine points, Will Johnston and Matja Millvojevic added six and Kadeem Wilks had five.  Kallin Fonseca and Justice Hayes tossed in three points each and then Nikola Sasaroga closed out the scoring with two points.

The NJCAA Region XVII tournament for the men will begin on April 6, with the top ranked teams hosting a first-round game.  The semi-finals and finals will be on April 9 and 10 in Rome at Georgia Highlands College, who has a lock on first place in the GCAA.

AMERICUS – After getting shut out 5-0 by a quality Pike County side the week before, the Americus-Sumer varsity boys... read more