The arts that include visiting museums and live entertainment are among the things I’ve missed most this past year so needless I’m excited to know they’ll be open soon.

Americus’ historic Rylander Theatre in downtown Americus like other theatres across the country has been shuttered for the past 12 months but thankfully there is a live stage show there next month.

The Friends of the Rylander organization is bringing in Barron Ryan, a talented young pianist of Tulsa, Oklahoma, will be in concert here on Friday, April 16. Curtain is 8 p.m. According to Heather Stanley, executive director of the Rylander, Ryan will present a repertoire ranging from jazz, classical to pop on the Rosalynn Carter grand Steinway piano during a 90 minute concert.  Everyone is asked to wear a mask.

Stanley says the theatre is still under the Georgia governor’s executive order and seating is limited to thirty percent capacity or about 150 people. I am more than thrilled. This is a wonderful way to ease back into live productions and listen to some beautiful music in an intimate setting.

Tickets at $20 each are on sale this week and I can’t wait to get ours. We’ve had both Fauci ouches’ however, we’ll wear a mask.

Another live production “Sail On” a Beach Boys tribute that was originally scheduled for the 2019-2020 season has been rescheduled for May 19. Tickets are not on sale yet. The remainder of the season presentations will be announced later.

Meanwhile, the 33rd annual Dogwood Antique Shoe and Sale sponsored by Town and County Garden Club was last weekend at the Leslie Civic Center and very successful. The event was cancelled last year like everything else so it was great to be able to attend this year and browse through the sparkling jewels, glistening silver, vintage furniture, baubles, beautiful antiques and delicious offerings in the tea room.

I enjoyed chatting with Malcolm Argo at his booth The Silver Source that was filled with an unusual collection of gleaming silver pieces. He and his wife Phyllis celebrated their 47th wedding anniversary Saturday at a dinner party at Daphne’s Lodge attended by their daughter, Amy Argo of Americus, son and daughter in law, Jim and Ann Argo of Savannah and Mary Urda, Phyllis’ sister in law, of Atlanta.

I also met Johnny and Laura Tucker of Athens who was with his mom, Phyllis Tucker, a member of the garden club. Others I enjoyed talking to were Kim Baldwin, George and Lynn Larson, Mandy Butler, Laura Joiner, Jane Abernathy, Jane Myers, Beth Williams, Elaine Thomas, John and Whitney Crisp and her parents of Montezuma, Lane and Daiquiri Tyson and their curly headed toddler, Leon Holloway, Michael Jarvis, Jo Jones, Norma Pilcher, Diane Sumner, Dee Hardin and many others.

Elsewhere, Lisa Simpson, vice-regent of Council of Safety, Daughters of the American Revolution, Americus, represented the chapter at the 123rd Georgia State Society DAR Conference at the Atlanta Evergreen Marriott Conference Resort at Stone Mountain. Among the highlights was receiving awards presented to Council of Safety: the Chapter Achievement award and State Honor Roll award. She attended the State Regents Club luncheon and the formal opening night banquet and ceremonies where guest speaker, past Reporter General Mindi Kammeyer, spoke on “A Civilian’s View of Vietnam.” On Saturday she went to morning business sessions and the DAR Schools luncheon featuring speakers from the various schools DAR supports, as well as afternoon business sessions. Highlight of the weekend event was the formal Awards and Chapter Recognition Banquet where featured speaker was DAR President General Denise Loring Van Buren, who spoke on the topic of “Rise and Shine.”

And Raven Martin, bride-elect of Theo Baldwin, was in Nashville, TN last weekend where she was honored by friends at her bachelorette party. Enjoying the fun in Music City was Hannah Smith, Kali McCalvin, Courtney Minix, Connor McCorkle, Haley Hawkins, Audrey Pugh and Staci Grey. Raven, a graduate of Georgia Southwestern State University with the bachelor’s degree in education, teaches at Crisp County Primary School.

And congratulations to Angie Sellars who was crowned Miss SAR 2021 at Southland Academy last Saturday evening. 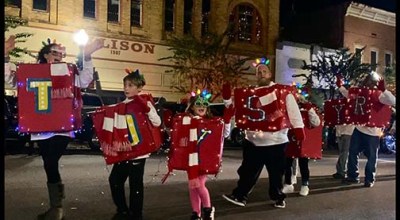 A grand celebration for the birth of the Christ Child