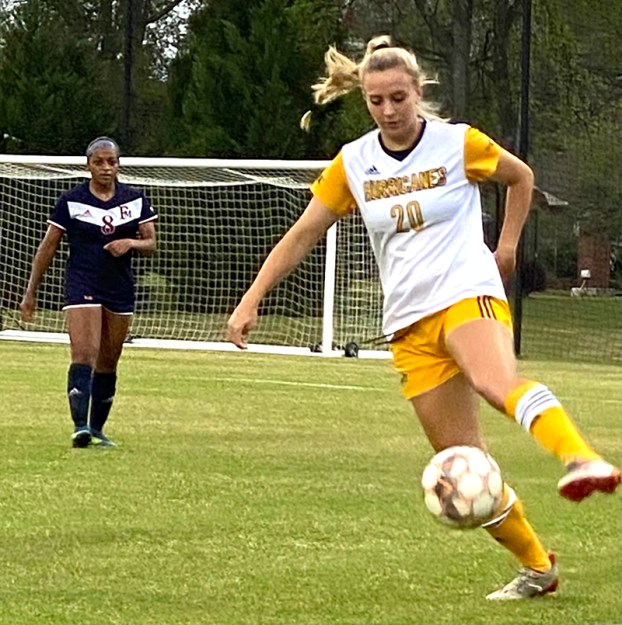 GSW sophomore forward Payton Johnson (20) fights to get the ball out the Lady Hurricanes’ end of the field in their match against Francis Marion. Johnson and her teammates will be playing for another coach next fall, as Chris Cogan has resigned from his position as GSW Head Women's Soccer Coach. ATR Archive

AMERICUS – The Georgia Southwestern State University women’s soccer team (GSW) came into Thursday night’s Peach Belt Conference (PBC) home match against Francis Marion University (FMU) hoping to snap a five game winless streak and earn its first win of the season. Unfortunately for the Lady Hurricanes, it was not to be, as FMU junior forward Valentina Restrepo scored in the 62nd minute. Though GSW had some chances, they were not able to get the equalizer and fell to the Lady Patriots 1-0 at Hurricane Field.

“We battled hard. We played the entire game hard. I was pleased with that,” said GSW Head Coach Chris Cogan. “I felt like we were a little more timid than we should have been. I felt like we needed to play with just a bit more attitude. They (FMU) have a couple of pretty solid players and one of them (Restrepo) made us pay for her talent and that’s the nature of the game sometimes.” 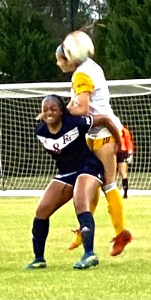 GSW sophomore defender Emma Carter climbs the back of an FMU player to get her head on the ball.
Photo by Ken Gustafson

Both teams played to a scoreless draw in the first half, but the Lady Patriots had the majority of the run of play and created more chances to score. However, GSW freshman forward Reilley Bain very nearly gave the Lady Hurricanes the lead three minutes into the second half when she sent a ball that glanced off the crossbar.

“Reilley is hitting the ball hard. She’s hitting it well,” said Cogan. “She had a couple of really good opportunities; one off the crossbar that had the keeper beat, I thought, but hitting the woodwork doesn’t quite do it. You’ve got to find a way inside the woodwork.” 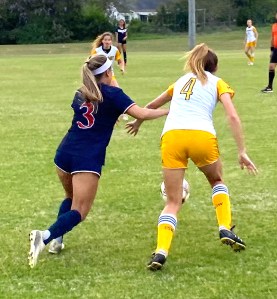 GSW sophomore forward Marina Augugliaro (4) fights for the ball with FMU’s Megan Misuraca. Augugliaro was poised to give the Lady Hurricanes the tying goal late in the match, but was thwarted by FMU defender Dayle McEwen before she could get her shot off.
Photo by Ken Gustafson

In the second half, the Lady Patriots continued to try to find their way inside the woodwork, but GSW freshman goalkeeper Trinity Chastain came up with some big saves to keep the Lady Hurricanes from going down a goal. However, in the 62nd minute, FMU finally broke through when Restrepo hit a shot that went past a diving Chastain and into the net. In the 71st minute, the Lady Hurricanes had a golden opportunity to tie the match when sophomore forward Marina Augugliaro got the ball and was one v one with the FMU goalkeeper and ready to take the shot, but just as Augugliaro was about to shoot to score, FMU defender Dayle McEwen made a defensive tackle on the ball, thwarting Augugliaro’s chance. That would be the last good chance for the Lady Hurricanes and they went on to lose to FMU 1-0.

The Lady Hurricanes will try once again to earn their first win of the season when they host the Lady Nighthawks of the University of North Georgia in another PBC match on Sunday, March 28, at 12:30 p.m.