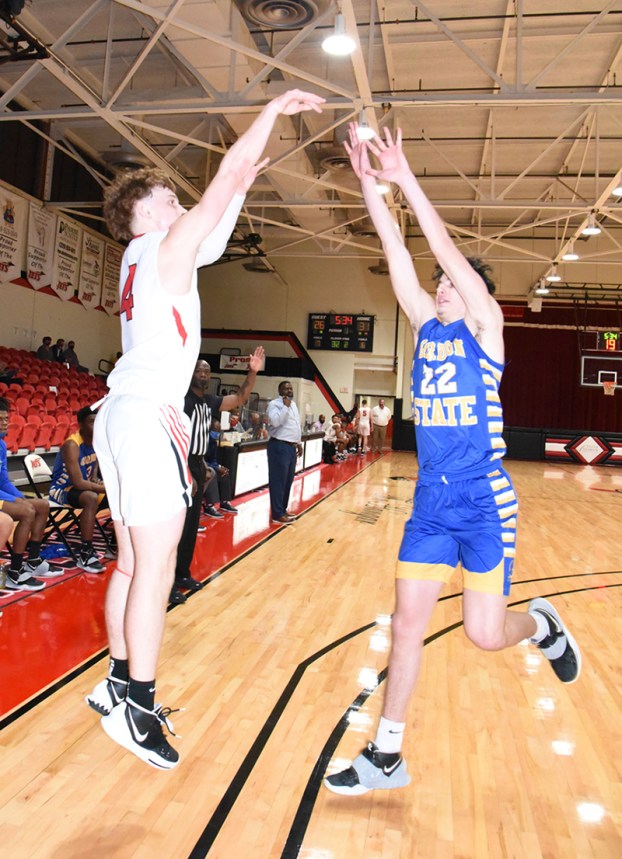 SGTC guard Will Johnson (4) led the Jets in scoring with 23 points. Johnson was 5 for 10 from the three point line and made all four of his foul shots. He also made two layups. Photo by Su Ann Bird

BARNESVILLE – The South Georgia Technical College Jets (SGTC) rebounded from their narrow 85 – 83 loss on Saturday to Gordon College (GC) at the Hangar to bounce back and secure an 87 – 65 victory over GC in Barnesville to move to 10 – 4 in the Georgia Collegiate Athletic Association (GCAA) and 12 – 8 overall.

“It was a good bounce back win for the Jets after letting one get away on Saturday,” said SGTC Jets interim head coach Chris Ballauer.  “We had a great team effort.  I though the guys that came off the bench were ready to play and that helped us a lot.  We have two games left before the tournament.  It would be nice to have a three-game winning streak and firing on all cylinders come tournament time.  We played an insane non-conference schedule and that has helped prepare us for this time of the year.”

SGTC dropped the first four of their initial five games in that “insane non-conference schedule.”  They lost twice to Tallahassee Community College, then once to Chipola and USC Salkehatchie, all of which were nationally ranked or included in the poll as honorable mentions.  The Jets conference losses included splitting decisions with Georgia Highlands, Southern Crescent Tech, Albany Tech and Gordon College.

“We have proved that we can play basketball with any team in our league including those nationally ranked,” said Ballauer.  “But the key is that we have to play.  We have to have a great team effort and we are counting on our starters and those coming off the bench to keep us in the game.  We can’t make mental mistakes against good teams and win.”

All five of the Jets starters scored in double digits Tuesday night on the road against GC.  Freshman guard Will Johnston led the team in scoring with 23 points.  He also had eight assists, three rebounds, and one blocked shot.  Marvin McGhee followed his lead with 19 points, seven assists, and five rebounds.  Sophomores Tabais Long, Jalen Reynolds and Jordan Stephens all followed with 14, 13, and 10 points respectively.  Reynolds led the team in rebounds with 11 and Long added seven, while Stephens pulled down three.

Kallin Forseca and Keundre Campbell came off the bench to toss in three points each and then Justice Hales closed out the scoring with two points.   The Jets hit 51.6% of their shots from the field but made 52% of their three-point attempts.  They also made 10 of 12 from the foul line.

The Jets are averaging 77.2 points per game.  They have won every game except one when they scored 72 or more points.  The only exception was GC on Sophomore Day, when a last second basket gave GC the win 85 – 83.