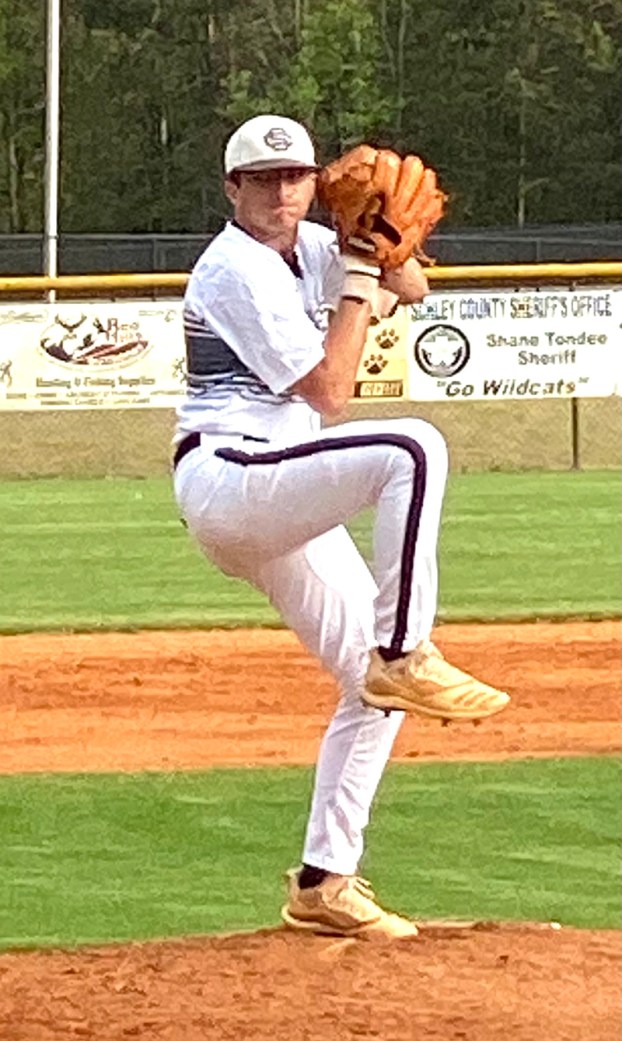 Schley County junior pitcher Trypp Lumpkin pitched eight scoreless innings to earn a hard-fought win against Taylor County. Lumpkin gave up only two hits and struck out 13 TC batters, while walking only two. Lumpkin also doubled in the bottom of the eighth to set up Owen Lamb’s game-winning hit. Photo by Ken Gustafson

ELLAVILLE – It took 7.5 innings of scoreless baseball, but in the bottom of the eighth inning, Schley County first baseman Owen Lamb drove in Dylan Taylor on an RBI single to give the Wildcats a memorable 1-0 victory over Taylor County (TC) to clinch the Region 5 A-Public title on Tuesday, March 30 at Schley County High School (SCHS).

The game’s finale was a fitting end to a tremendous pitchers’ dual between the Wildcats’ starting pitcher Trypp Lumpkin and TC starting pitcher Hunter Moore. Both pitchers pitched the entire game and combined to give up a total of eight hits, but Lumpkin was slightly better. He gave up only two hits and struck out 13 TC batters, while walking only two. In contrast, Moore gave up one run on six hits, walked four batters and struck out five in the loss.

“Hats off to Taylor. We beat them pretty good at their place and knocked Hunter (Moore) off the mound early in the game,” said SCHS Head Coach Chuck Cheek. Cheek was referring to the February 26 meeting between the two clubs in Butler earlier this year in which the Wildcats shutout the Vikings 13-0.

However, the second meeting between the two teams was much different and Cheek credited Moore and the rest of the Vikings for making it that way. “He did a great job. He mixed his pitches up. Every time we had a scoring chance, he made some big pitches and got some strikeouts and some weak contact,” said Cheek. “I’ve got to give a ton of credit to Mark (Wilson) and his coaching staff and their guys for showing up to play.” 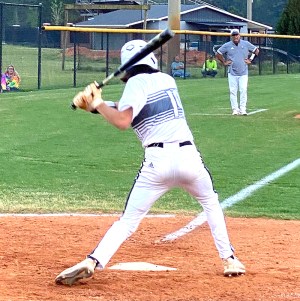 Schley County first baseman Owen Lamb drove in the winning run in the bottom of the eighth inning on an RBI single to right field to give the Wildcats a 1-0 victory over Taylor County and the Region 5 A-Public championship.
Photo by Ken Gustafson

“Trypp was phenomenal on the mound. That’s kind of what we expect from him,” said Cheek. “He’s a really good pitcher for us. He didn’t get rattled when they got some guys on base a couple of times. I think he struck out 12 or 13 guys, which is good.”

While Cheek was obviously pleased that his club was able to earn a victory, as well as with Lumpkin’s performance, he expressed concern over his club’s lack of offensive productivity, particularly with runners in scoring position. “I told the guys that when you have opportunities to score early and you don’t take advantage of it, it comes back to haunt you,” said Cheek. “We have to do a better job of getting guys in when we’ve got second and third with one out. We can’t have weak contact and swings and misses. That’s something we’ve got to work on. We hit the ball a ton in practice. We hit the ball a ton in the batting cage. If we can get that to translate to a game, we’re going to be pretty good, but right now, we’re still working some kinks out, it looks like.”

While Lumpkin got it done on the mound for the Wildcats, he also got it done at the plate. He led the SCHS offense by going 2 for 4, including a crucial one-out double in the bottom of the eighth that would eventually lead to victory for SCHS. After Luke Renfroe struck out to lead off the bottom of the eighth, Dylan Taylor singled to right field. That was followed by Lumpkin’s double, which put the winning run 90 feet away. TC then decided to intentionally walk Tucker Welch in hopes of setting up a double play, but Owen Lamb had other ideas. With the count at one ball and one strike, Lamb drove in Taylor on a ground ball single into right field to give the Wildcats the 1-0 victory and the region championship.

With the win, the Wildcats are now 13-5 overall on the season and have secured the Region 5 A-Public championship with an undefeated region record of 9-0. 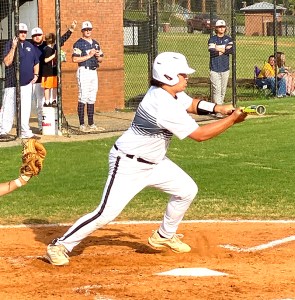 Schley County designated hitter Jack Clark tries to lay down a bunt against Taylor County. Clark went 1 for 3 at the plate with a single.
Photo by Ken Gustafson

The Wildcats, having won six straight games, will try to extend their winning streak to seven when they travel down US Highway 19 to Leesburg for a rematch against Lee County (6-13) on Thursday, April 1. First pitch is scheduled for 5:45 p.m. In the last meeting between the two clubs in Ellaville on Monday, March 22, SCHS defeated the Trojans 6-5.

Loren Smith’s column on the life of Howard Schnellenberger

In 1983 when Georgia played without Herschel Walker in the backfield for the first time, I became involved with a... read more