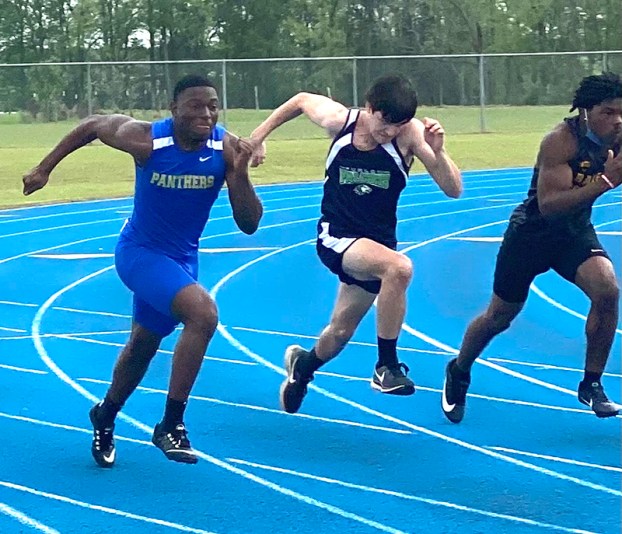 Americus-Sumter’s Jawaski Whitehead (left) and Furlow Charter’s Apollo Huss (middle) compete against each other at the practice meet at Pelham High School. Photo by Ken Gustafson

PELHAM, GA – On Wednesday, March 31, the Americus-Sumter and Furlow Charter boys and girls’ track and field teams travelled down to Pelham, GA to compete in a practice meet at Pelham High School in preparation for the upcoming Westover Relays in Albany and the upcoming region and state meets.

For the Lady Panthers, this meet ended up being good preparation for the upcoming competitions. McCrary finished in second place the discus event with a distance throw of 69-1 and finished in third place in the shot put with a throw of 24-10. 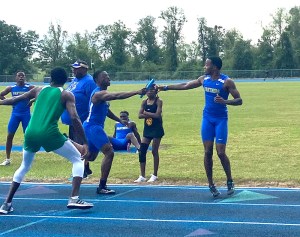 Americus-Sumter’s Jawaski Whitehead passes the baton to Breylon Green in the Boys 4×400-Meter Relay at the Pelham meet.
Photo by Ken Gustafson

“The girls did good today. We had some good performances from our freshman,” said ASHS girls’ head coach Shanikah Dyson. “Jakiera Pride; she did very well in the long jump. We’ve been working on a lot of things with her. She shows a lot of promise in the years to come. We have a lot of development for the other girls that are coming along.” 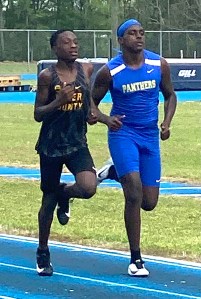 Americus-Sumter’s Kavon Lewis (right) competes against a runner from Baker County in the 800-Meter Run at the meet in Pelham.
Photo by Ken Gustafson 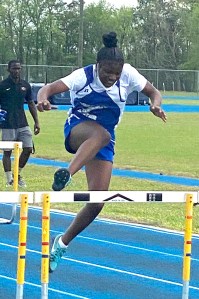 Americus-Sumter’s Shakyrah Pride competes in the hurdles events at the Pelham meet. Pride also competed in the 200 and 100-Meter Dash, finishing with times of 31.03 and 13.95 respectively.
Photo by Ken Gustafson 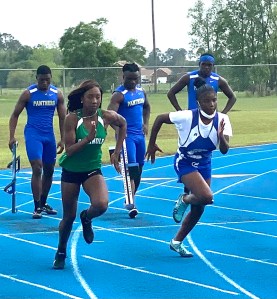 Americus-Sumter’s Jakiera Pride (right) competes in an event at the Pelham meet against a runner from Seminole County. Pride jumped a distance of 14-8 in the Girls’ Long Jump event and ran the Girls’ 200-Meter Dash in a time of 29.35.
Photo by Ken Gustafson

Being that this was a practice meet, not all of the results of the events were recorded, but the ASHS boys’ team got in some good practice competition as well.

As far as Furlow Charter was concerned, head coaches Brandon Mitchell and Beth Kinney were pleased with the way their teams competed, even though it was a practice meet and didn’t count towards the season standings. 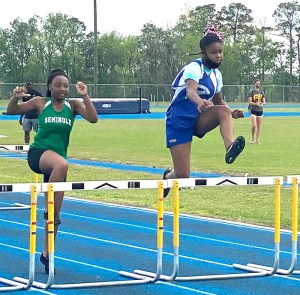 Americus-Sumter’s Cyniah McCrary (right) competes in one of the hurdles events at the Pelham meet. McCrary also competed in the discus and shot put competitions.
Photo by Ken Gustafson

“Our team competed hard today at the Pelham Meet,” said Mitchell. “Our athletes did excellent for their second track meet; however, there are a lot of areas we need to work on. We will continue working on our throwing techniques and push ourselves harder on our racing events.” 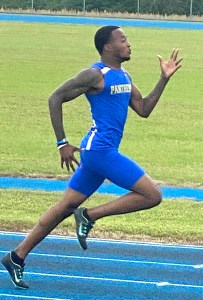 The ASHS Panthers and Lady Panthers will compete on Friday, April 9 at the Westover Relays at Hugh Mills Stadium in Albany. The next meet for the Furlow Charter Falcons and Lady Falcons will be on Wednesday, April 14 at Marion County.