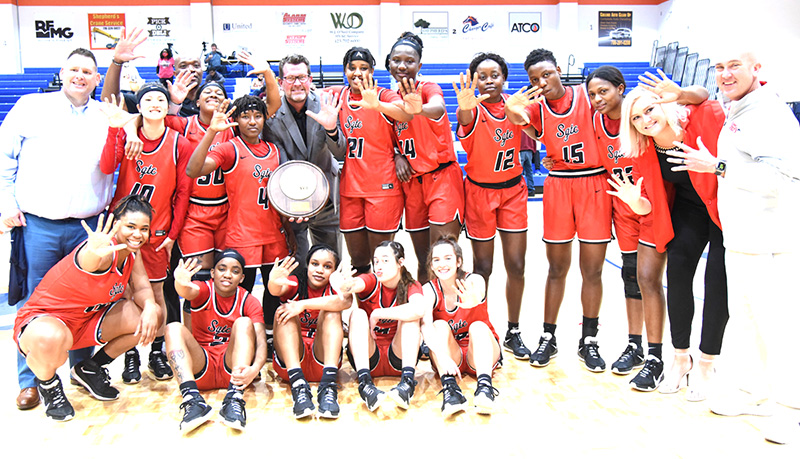 The South Georgia Technical College Lady Jets are shown above with SGTC President Dr. John Watford and the NJCAA Region 17 trophy after the Lady Jets defeated Georgia Highlands, 80 – 71 in overtime in Rome, GA. The Lady Jets will now host Spartanburg Methodist in the Southeast Conference game on Saturday, April 10 at 1 p.m. in Americus. Photo by Su Ann Bird

Sophomore 6’ 5” Center Femme Sikuzani from GOMA, DRC, was named as the NJCAA Region 17 Tournament’s Most Valuable Player.  She had 21 points and 15 rebounds in the win over Georgia Highlands and 12 points and 12 rebounds on Friday night in a narrow 63 – 60 win over East Georgia in the semi-finals.

Sophomore guard Veronica Charles, who was the GCAA Defensive Player of the Year, was also named to the NJCAA Region 17 All-Tournament team.  She scored 18 points, had two rebounds and four steals while holding the Georgia Highlands GCAA Player of the Year Jashanti Simmons to only 17 points.  Simmons scored 39 points in the two team’s first match-up in a double over time contest and 26 in the second match-up.  SGTC’s Charles also had 16 points and three steals in the win over East Georgia.

“I am so proud of our young ladies and coaches,” said SGTC Athletic Director and Lady Jets head coach James Frey.  “It is nearly impossible for people outside our circle to understand what these players have been through since August.  The pandemic has obviously been incredibly hard on everyone but for student athletes, the mental stress of the pandemic on top of the academic stress and all the demands of athletics at our level is overwhelming at times.  Our young ladies dedicated themselves to being in the right places and doing the right things to avoid COVID.  They have focused on their academics and maintained a high GPA and while we had a mid-season lull where we didn’t play well for a couple of weeks, we had some incredible sophomores that helped us fight through that and right the ship.” 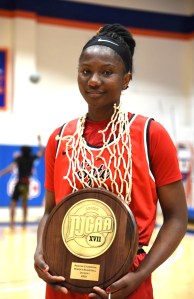 SGTC Sophomore center Femme Sikuzani (34) from Goma, DRC, was selected as the NJCAA Region 17 tournament Most Valuable Player. She had 21 points in the game against Georgia Highlands and led her team with 14 points against East Georgia in the semi-finals.
Photo by Su Ann BirdDespite all those obstacles, including suffering back to back losses in the regular season to Georgia Highlands which allowed the Lady Chargers to take the GCAA regular season title for the first time in five years, the Lady Jets maintained their composure and came back to capture the NJCAA Region 17 title in Rome.

That win earned them the right to advance and host the Southeast District Championship Tournament on Saturday, April 10 at 1 p.m. in Americus.  They will play Spartanburg Methodist, the Region 10 champions, for the chance to advance to the NJCAA District 1 Women’s National Tournament in Lubbock, Texas.   This will be their fifth consecutive time to qualify for the National Tournament and their seventh time under head coach James Frey and eighth total for the program since it was stated in 2004 – 2005.

“I want to thank our President Dr. John Watford and his family, Vice President Su Ann Bird and her family, Assistant Vice President Vanessa Wall, Academic Dean Dr. David Finley, our booster club president Mrs. Martha Arrington, and the rest of our incredible fans especially our men’s team and their coaches who all made the three-and-a-half-hour trip to Rome and turned an away tournament into what felt like a home game,” said Coach Frey.  “Our men’s team was our sixth man (woman) in those stands for the two days of the tournament.  They really had our back!  I can’t say enough about how wonderful our fan support was this weekend.  I was truly blown away and so was our team.”

South Georgia Tech regained the lead in the 3rd quarter and was up 53 – 47 going into the fourth quarter.  Georgia Highlands overcame that deficit to pull ahead 62 – 61 with 2:08 remaining in the regulation period.  They were still up 68 – 65 with 11.4 seconds remaining.  Sophomore Imani McNeal hit a three-point shot with 6.2 seconds to tie the game at 68 – 68 and force the game into overtime.

From that point on, South Georgia Tech dominated and outscored Georgia Highland 12 – 3 to take the 80 – 71 overtime victory and earn the right to host the Southeast Conference Championship game on Saturday, April 10th for the right to advance to the NJCAA Division I women’s national tournament in Lubbock, Texas.

In addition to sophomore Femme Sikuzani’s 21 points and Veronica Charles 18 points, two other Lady Jets were in double-figures.  Imani McNeal, whose three-pointer allowed the Lady Jets to advance to the over-time, had 11 points on the night with six rebounds and one steal.  Niya McGuire walked away with 10 points and seven rebounds and one assist.  Moe Shida had seven points, Flore Ngasamputu tossed in five, Hope Butera had four, and Maikya Simmons and Tena Ikidi closed out the scoring with two points each.

“We have really worked hard the past four or five weeks to be sure we would be prepared for our conference tournament and playing well,” said Frey.  “While it wasn’t the best, we played incredibly hard and showed a great desire to win this weekend.  It’s really hard for me to put into words how proud I am of all thirteen of these young ladies, my assistant coaches and Brian Davis, our Athletic Trainer.  We have had a lot of injuries this year and thankfully we have the best in the business to see our young people through their rehabs and get them back on the court ASAP.  Each of the players and coaches put the team before themselves and because of that, we are the champions again.”

But coaches and players don’t get to relax now, they have to be back on the court for the next challenge.  “Looking forward, I just started working on Spartanburg Methodist last night or early this morning when we got back.  I’ve only seen one game, but they have a lot of experience, play really fast and are a very well coached team.  Coach Kelly Brisky, who was the head coach at GSW her for years, is now the coach there.  I expect we will have a good week of focus and preparation and I’m excited to have another opportunity for our young ladies to play not just another game but another home game and hopefully punch our fifth consecutive ticket to the national tournament.”

The Lady Jets are 14 – 2 in the GCAA and 21 – 3 overall this season.  They are currently ranked 8th in the nation and were as high as second this season in the NJCAA Division 1 national rankings. Spartanburg Methodist is 14 – 5 overall.  They beat Denmark Tech, 85 – 65 to earn the right to advance to the Southeast District game in Americus at 1 p.m. on Saturday, April 10th.

In closing, Coach Frey encouraged the whole Americus community to come out on Tuesday night, April 6th at 6 p.m. and support the Jets in their first round of the NJCAA Region 17 competition.  “If you haven’t seen the Jets play yet, you are missing a great show!  I know I am ready to go and see them in action and then come back four days later and face Spartanburg Methodist.  There are two great opportunities to watch Jets and Lady Jets basketball this week.  Join us.”