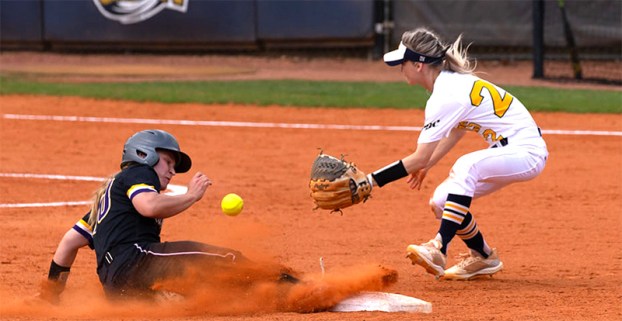 GSW shortstop Kimmy Singer tries to make a play at second base. Photo by Christopher Finn

AMERICUS – The Georgia Southwestern State University (GSW) softball team dropped two Peach Belt Conference games to Augusta University (AU) during a midweek doubleheader on Wednesday, April 7 by scores of 5-1 and 9-0. The Lady Hurricanes had a difficult time generating offense as they combined for six hits throughout both games.

GSW pitcher Shannon Gibson came on as a relief pitcher during both games and finished with eight strikeouts throughout 8.1 innings of work.

In Game 1, AU started strong. Already up 1-0 in the first inning, the Lady Jaguars loaded the bases and cleared them all when Emma Seagrave belted a grand slam home run to give AU a 5-0 lead. In the bottom fourth, Zoe Willis was walked with two outs and Katelyn Wood gave GSW its first hit of the day with a RBI double into right center as GSW was aiming for a comeback. Jacie Johns started off the bottom of the sixth with a single up the middle, but failed to score as everyone was retired in order.