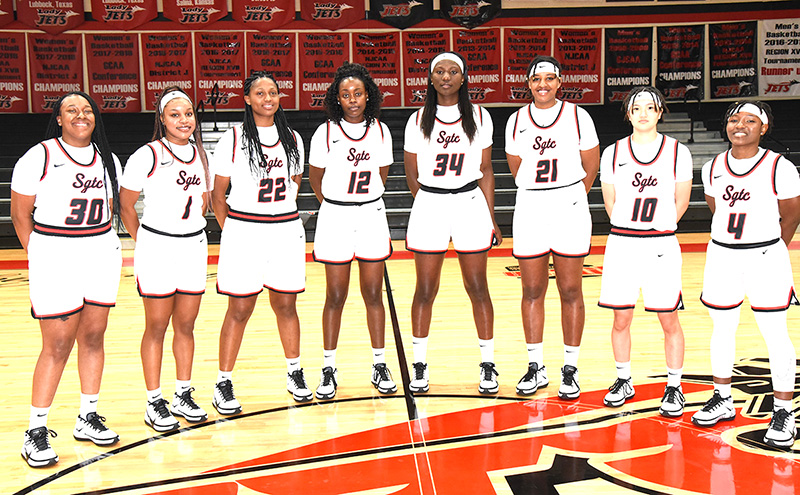 In order to be named to the GCAA All-Academic Team, student athletes must be a sophomore with a minimum of three full-time terms and a minimum of a 3.0 cumulative GPA.  Only 34 players in the GCAA earned this recognition from the men’s and women’s basketball teams.

“I am so proud of each of these student-athletes,” said SGTC Athletic Director and Lady Jets head coach James Frey.  “These students put in many hours of hard work on the basketball court, but they are just as diligent with their school work.  That is what helps create a winning program; smart players who realize the importance of hard work on and off the court.  Basketball is important, but the education that these students gain will be valuable long after they retire from this sport.”

Kamya Hollingshed returned for what would have been her sophomore year but tore an ACL in the pre-season and was out for the entire year.  Serving as a player-coach in 2019 – 2020, the Lady Jets posted their second unbeaten conference season for Coach Frey with a 17 – 0 season.  The team finished the season ranked 15th nationally and won the GCAA regular season conference title, the NJCAA Region XVII tournament and the District J tournament game to earn another trip to the National Tournament.  Unfortunately, the national tournament was cancelled due to COVID-19 and the season ended with the Lady Jets 30 – 2 overall.

Hollingshed returned to SGTC after being red-shirted and tore her second ACL in pre-season for the 2020 – 2021 year.  She rehabbed and was able to return to the court with three games remaining in the season.  She hit five three-pointers in the fourth quarter against East Georgia to allow the Lady Jets to come from behind and post a major win.  This season she has helped her team both as a player and as a player/coach and led them to a second-place finish in the GCAA regular season and the NJCAA Region 17 title.  The Lady Jets play Spartanburg Methodist at 1 p.m. Saturday, April 10 for the opportunity to return to the NJCAA National Tournament in Lubbock, Texas April 19 – 23.  During her time at SGTC, Hollingshed has helped the Lady Jets to an 81 – 9 record.

The three members of the Jets on the All-Academic team include GCAA Player of the Year, Jalen Reynolds from Darien, GA; Nikola Sasaroga from Novi Sad, Serbia; and Jordan Stephens from Macon, Georgia.  Reynolds and Stephens have been with the Jets for two seasons and Sasaroga transfer in for his sophomore season.

Both the Jets and the Lady Jets have the opportunity to advance to the next level.  The Lady Jets will host Spartanburg Methodist on Saturday, April 10th at 1 p.m. for the opportunity to earn their fifth straight trip to the NJCAA national tournament.  The Jets travel to Waycross on Friday, April 9 to face South Georgia College in the NJCAA Region XVII tournament semi-finals.  The winner of that game will advance to the final round of the tournament on Saturday, April 10 at 4 p.m. in Waycross for a chance to attend the NJCAA Division I men’s tournament in Hutchinson, Kansas.

Kamya Hollingshed overcomes adversity to return to court for…