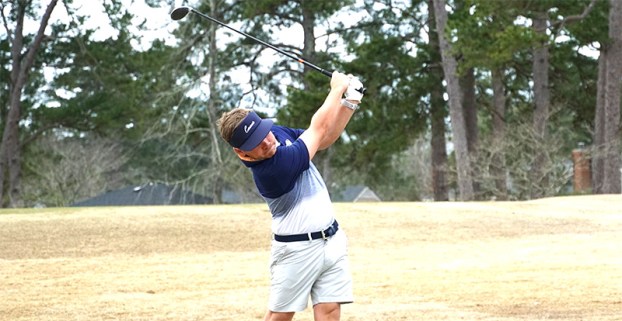 AMERICUS – Georgia Southwestern State University junior Chase McLain was named the Peach Belt Conference Golfer of the Week by the league office on Thursday afternoon, April 8. McLain finished fifth out of 86 golfers with a final score of six-under-par (210) at the 15-team Argonaut Invitational hosted by the University of West Florida that concluded Tuesday, April 6. The event included 12 teams ranked in the Top 25 of NCAA Division II.

McLain was one of only two golfers to shoot under par in each of the three rounds. The Leesburg, GA native posted 12 birdies in the tournament. He currently ranks sixth in the Peach Belt with a 71.7 stroke average.

This was McLain’s second Top 5 finish in his career and his fifth Top 10 result. It’s the second time he has earned the PBC’s weekly honor. McLain was named PBC Golfer of the Week on October 27.

McLain becomes the sixth Georgia Southwestern golfer to earn multiple Peach Belt Golfer of the Week awards during his career.