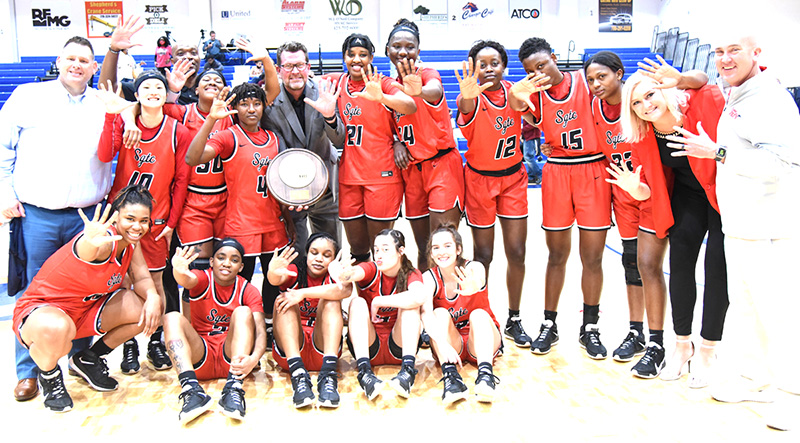 SGTC Women’s Head Basketball Coach James Frey and the 2020 -2021 Lady Jets are looking for their fifth consecutive chance to qualify for the NJCAA Division I National Tournament. Photo by Su Ann Bird

AMERICUIS – The nationally ranked South Georgia Technical College Lady Jets will be hosting Spartanburg Methodist from Spartanburg, SC, on Saturday at 1 p.m. in the Southeast Conference playoff game at the Hangar to determine which team will automatically advance to the NJCAA Division I national tournament in Lubbock, Texas April 19 – 24 at the Rip Griffin Center on the campus of Lubbock Christian University.

The 2021 NJCAA Division I Men’s and Women’s basketball Selections shows will air live on the NJCAA Network on Sunday, April 11 to announce the national tournament at-large selections and tournament seeding.  The Division I Women’s basketball selection show will air Sunday at 5:30 p.m. and the Division I men will air on Sunday at 7:00 p.m.  The link to watch those events is:  https://www.njcaa.org/network.  Even if the Lady Jets do not win the Southeastern Conference playoff game, they may still qualify for an at-large bid as the eighth ranked team nationally.

The NJCAA Division I Men’s and Women’s tournaments feature 24 teams – 16 automatic district qualifiers and eight additional at-large selections that will be announced during the selection show.  Regional and district postseason play results can be followed on the NJCAA District Tournament Tracker at: https://www.njcaa.org/sports/wbkb/2020-21/div1/region_district_championship/index for the women’s teams and https://www.njcaa.org/sports/mbkb/2020-21/div1/region_district_championship/index for the men’s teams.

The Lady Jets captured the NJCAA Region 17 tournament with an 80 – 71 overtime win over the GCAA regular season champion Georgia Highlands Lady Chargers in Rome last week.  The winner of the Region 17 tournament advances to the NJCAA Southeast Conference playoff against the Region 10 winner, which is Spartanburg Methodist.  The winner of that match-up will advance to the national tournament.

This is former GSW head women’s basketball coach Kelly Britsky’s first year as the interim head women’s coach for Spartanburg Methodist.  She has over 20 years of experience, 12 of those at GSW.

The Lady Jets have earned the right to the NJCAA national tournament for the past four years and eight times since the program was started in 2004 – 2005.  This could be the fifth consecutive trip for the Lady Jets and the seventh for head coach James Frey in nine years.  He did not qualify for nationals in his first year as head coach in 2012 – 2013, and lost the Region XVII tournament in 2015 – 2016.  He has had 20 or more wins each year he has coached as SGTC.