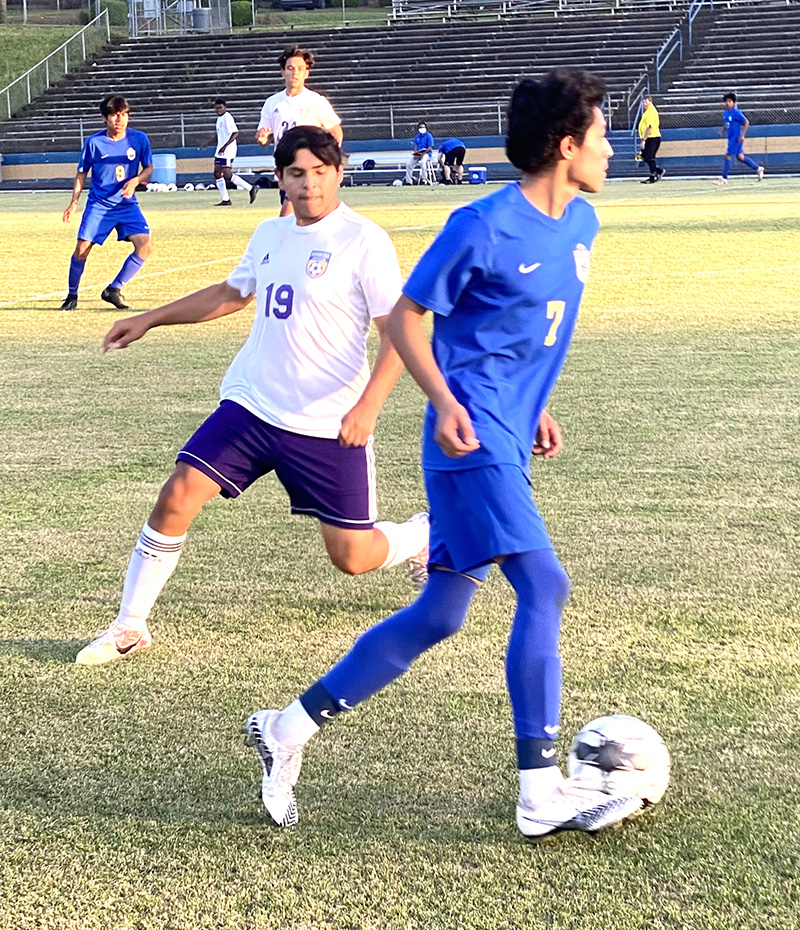 AMERICUS – After a 2-0 loss to Region 2-AAA opponent Peach County on Friday, April 9, the Americus-Sumter Varsity Boys’ Soccer Team (ASHS) came into its final regular season home match on Monday against Bainbridge (BHS) hoping to rebound with a win over the Bearcats. However, BHS scored 17 seconds into the match and netted three more goals in the first half. Though the Panthers fought back in the second half with two goals, they were not able to overcome the early onslaught of the Bearcats and fell to BHS 6-3 at Alton Shell Stadium.

According to ASHS Head Coach Michael Pepito, the match against Peach County was a match his players really wanted to win, but they weren’t able to put that loss behind them and it carried over into their match against BHS. “We came off that loss from Peach and the guys wanted to beat Peach really bad. I want to say that it’s a lot of mentality. It kind of got them down,” said Pepito.  Pepito went on to say that while he wants to finish as high as possible in the region standings, the main goal for his club is getting into the state playoffs. “I understand about region, but playoffs are a lot different and they’re a lot more important because we go farther. Who cares where we finish as long as we’re going,” said Pepito. “Tonight, we came out soft. We didn’t come out exactly right. We’ve always kind of had an issue with that because the kids are young and they don’t really understand aggressiveness or they don’t understand how important the ball is.” Pepito went on to say that at halftime, he sat his guys down and told them that no matter the outcome of the score, he wanted them to exert non-stop pressure and to run through the ball because they need to learn to get to that level.

Americus-Sumter forward Alexis Vazquez is in action against Bainbridge.
Photo by Ken Gustafson

It didn’t take long for BHS to put its stamp on the match. Just 17 seconds after kickoff, the Bearcats took a 1-0 lead when Jose Avalo scored off an assist from Mason Ard. Then in the ninth minute, the Bearcats doubled their advantage when Brock Williams crossed the ball into the 18-yard box where Nicholas Tyre was there to get his head on it and knock it into the net. Two minutes later, Ard scored the first of his two goals of the match. Then in the 35th minute, Ard made it 4-0 BHS when he scored his second goal. Fortunately for the Panthers, they would not leave the pitch scoreless, as Jesus “Choochie” Rodriguez was able to get ASHS on the board with a goal in the 35th minute. Both teams went into halftime with BHS leading 4-1.

However, the beginning of the second half almost began just like the beginning of the game, as the Bearcats quickly moved the ball down the pitch and nearly scored just seconds into the second stanza. The Bearcats continued to pressure the Panthers’ back line and were creating more chances to score. Then in the 45th minute of play, BHS broke through again when Avalo scored his second goal of the match to make it 5-1 in favor of BHS. Two minutes later, the Bearcats struck again as Brock Williams scored to make it 6-1. At this point, there seemed to be no way back for the Panthers. 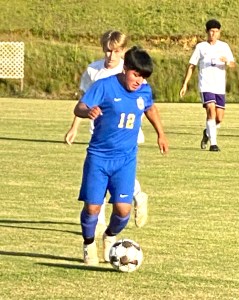 Americus-Sumter H Back Roberto Gonzalez (12) tries to advance the ball for the Panthers against Bainbridge.
Photo by Ken Gustafson

However, ASHS finally showed some life by creating chances in the final third and putting pressure on the BHS back line. That aggressiveness paid off in the 59th minute when Leo Diaz tried to cross the ball into the box, but the ball glanced off the hand of a BHS player. Being that the handball occurred inside the 18-yard box, the Panthers were awarded a penalty kick. Kevin Abarca stepped up and converted the penalty and the Panthers were one goal closer, trailing 6-2. Then in the 63rd minute, the Panthers got to within three goals when Rodriguez was able to score his second goal of the match. Being that the Panthers trailed Jackson 4-0 back on February 26 and scored five goals in the second half to get themselves back into that game, a comeback of that magnitude in this game was not out of the realm of possibility.

However, there would be no such comeback on this night as the Bearcats (4-6-1) would go on to win the match 6-3.  Throughout the match, ASHS goalkeeper Ary Flores was kept extremely busy and came up with numerous saves on the night. 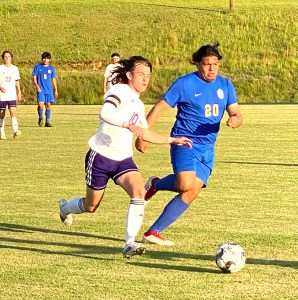 With the loss, the Panthers fall to 5-5 on the season and are 4-3 in the Region 2-AAA standings. They will finish the regular season with a road trip down to Sylvester, GA to take on Worth County on Friday, April 16. Kickoff is scheduled for 7:30 p.m.