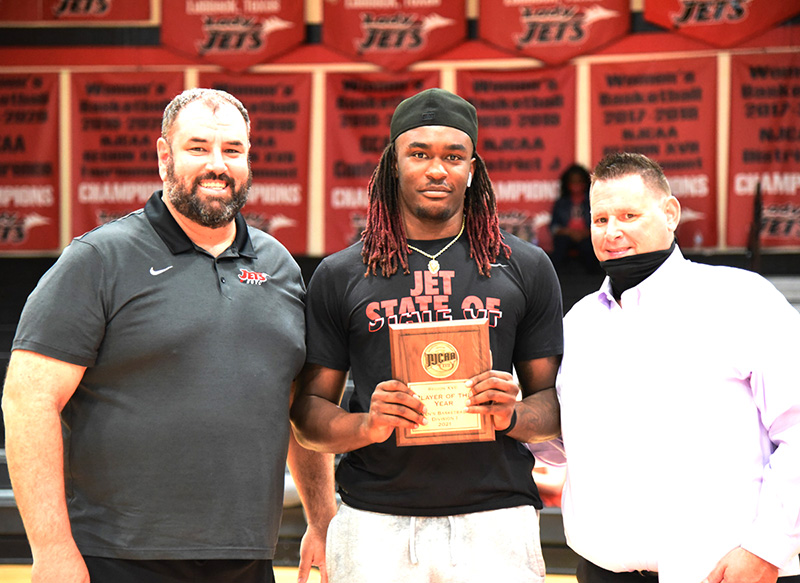 “It was a good season,” said SGTC interim head coach Chris Ballauer.  “It ended sooner than we would have liked, but I was very proud of this team and the way they came together.  No one really expected much out of us this season, so to be able to finish third in the regular season conference and then advance to the NJCAA Region 17 semi-finals is an accomplishment.  However, it is not where we set our sights and we are already working on how to improve next year.”

The Jets got off to a very slow start.  They did not put any points on the scoreboard until nearly seven minutes into the game.  By that time, South Georgia State had amassed a 10 – 0 lead.  Freshman guard Marvin McGhee finally got the team on the board and scored the team’s first eight points, but South Georgia State was up 21 – 8 with 8:14 remaining in the first half.  At one point, the Hawks jumped to a 14-point lead in the first half.

“Even though we were definitely struggling in that first half, I felt good when we were only down six going into the locker room,” said Coach Ballauer.  “We came back in the last eight minutes of the half and outscored South Georgia 18 – 11 to close the gap to 32 – 26.”

Both teams had a better second half and each scored 41 points in the final 20 minutes.  So that six-point deficit at the end of the first half came back to haunt the Jets at the end.  South Georgia Tech did tie the game at 55 – 55 with 5:59 remaining in the game, but South Georgia State took advantage of free throws to capture the win.   The Hawks were 23 of 32 from the foul line and the Jets only made 19 of 30 from the free throw line. 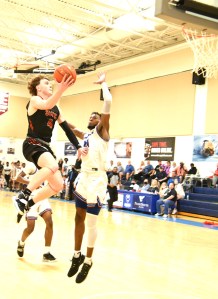 Freshman of the Year Will Johnston led the Jets in scoring with 20 points.  He also had a double-double night with 11 rebounds.  He was four of eight from the three-point line and eight of 10 from the foul line.  He also had three assists and a steal.

Sophomore Jordan Stephens was close behind Johnson with 19 points on the night.  He also had six rebounds.  Marvin McGhee was the only other Jet in double-figures.  He came away with 15 points and eight rebounds.  Jalen Reynolds accounted for eight points and 11 rebounds and then Matija Milivojevic added four points and Tabais Long closed out the scoring with one point.  Long fouled out early in the second half and both Jalen Reynolds and Will Johnston ended the game with four fouls.

The Jets ended the GCAA season in third place with an 11 – 5 record and were 14 – 10 overall.  Sophomore Jalen Reynolds earned the GCAA Player of the Year honors and Will Johnston was the Freshman of the Year for the GCAA.  Freshman Marvin McGhee was named second team All-Region in the GCCA.

“I am very proud of how hard this team played all season long,” said Coach Ballauer.  “They refused to give up and I wish we were able to advance especially for our sophomores, Jalen Reynolds, Tabais Long, Jordan Stephens, and Nikola Sasaroga.  They provided great leadership for this team and we will miss them.”  Coach Ballauer added that “those four will be hard to replace, but we do have a good group returning next year to build on.”