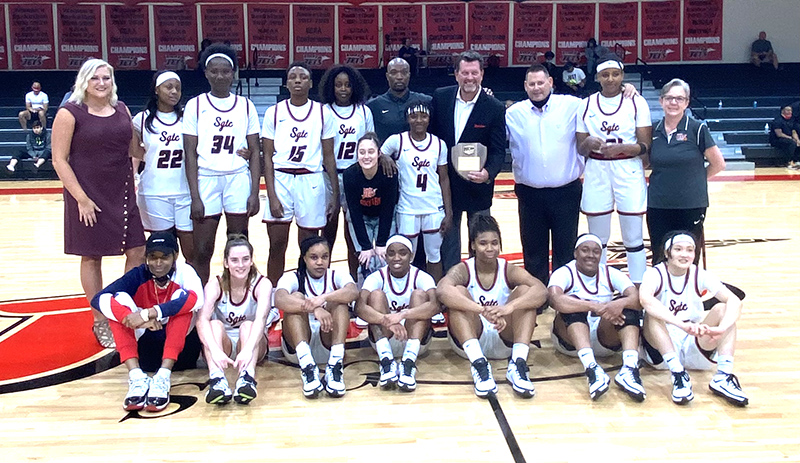 AMERICUS – The South Georgia Technical College (SGTC) women’s basketball team has done it again for the fifth straight time and the eighth time in school history. After a tough and competitive first half between SGTC and Spartanburg Methodist College (SMC), the Lady Jets (22-3) enforced their will on the contest in the second half and rolled SMC 87-59 at the Hangar to capture the NJCAA Southeast District Championship and the program’s fifth straight berth in the NJCAA Division I National Tournament in Lubbock, TX.

“It’s our fifth time in a row. We’re excited about it,” said Frey. “It has been a really difficult year with all the COVID stuff. This is a great group of young ladies. They really persevered and did what we needed to do to win games. We’re 22-3. I’m really proud of our group, our school and our administration and all of the support they’ve given us. I am really happy for our sophomores who were here last year and worked so hard to get to the national tournament, but didn’t make it because of COVID-19. The Lady Jets have really worked hard and showed great discipline all year and now here we are celebrating our fifth conference and district win in five years and making plans for our fifth consecutive trip out to Lubbock,” Frey continued. 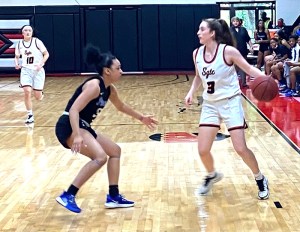 SGTC freshman shooting guard Abby Solway (3) scored 17 points and made four of nine three-point attempts to lead the Lady Jets to an 87-59 victory over Spartanburg Methodist College in the finals of the NJCAA Southeast Conference. As a result of their victory, the Lady Jets have punched their ticket to their fifth straight NJCAA national tournament.
Photo by Ken Gustafson

The Lady Jets earned a sixth-place seed in the NJCAA National Tournament and will receive a first round bye.  They will open the tournament on Wednesday, April 21 at 7 p.m. CST (8 p.m. EST) against the winner of the game between Tyler Junior College (TX) and Walters State (TN) that will play on Tuesday, April 20.

During his nine years as the Lady Jets’ head coach, Frey has led SGTC to nine straight seasons in which the Lady Jets have won 20 games or more. The only two years that the Lady Jets did not qualify for the nationals was in 2012 – 2013 in Frey’s first year as head coach and then again in 2015 – 2016 when they lost the Region XVII tournament.  The Lady Jets are 22 – 3 this season and finished 13 – 2 in the Georgia Collegiate Athletic Conference (GCAA).

“We started a little slow Saturday against Spartanburg Methodist, but really played a fantastic second half,” said Frey.  “We got our perimeter shots falling and our big girls continued to improve as they have over the past few weeks.  I feel like we are starting to play well at the right time.” 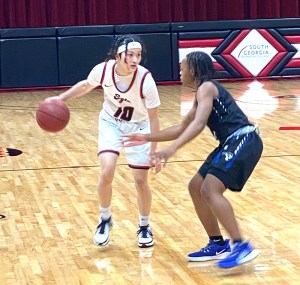 The Lady Jets scored first in the matchup with the Lady Pioneers. Despite jumping out to a 29 – 17 lead in the first half, there were four lead changes and two ties before SGTC went into the half with a narrow 37 – 34 lead.  The Lady Pioneers outscored the Lady Jets 17 – 9 to close the 28 – 17 gap from the end of the first quarter.

The Lady Jets came back in the second half and outscored SMC 23 – 10 in the third quarter and 27 – 15 in the fourth quarter to take the 87 – 59 victory and the opportunity to advance to the NJCAA women’s Division I National Tournament.

SGTC sophomore center Femme Sikuzani goes up to score a layup against SMC. The 6’5 center from Goma, DRC posted a double-double with 13 points and 13 rebounds to help lead the Lady Jets to victory and their fifth straight trip to the NJCAA Division 1 National Tournament.
Photo by Ken Gustafson

Freshman Abby Solway from Queanbeyan, Australia was the leading scorer for the Lady Jets with 17 points.  She came off the bench to hit four of nine three pointers.  She was six of 12 overall from the field and one of one from the foul line.  She also tallied one rebound, one assist and one steal on the night.

“It has been really fun and everyone has contributed,” said Solway. “We have a whole lot of depth on our team so everyone is able to get on pretty much every game and contribute to the game. It’s a good team and it’s a lot of fun.” 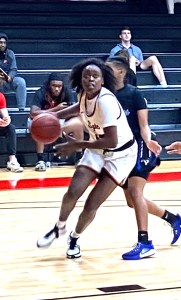 SGTC sophomore center Flore Ngasamput drives to the basket against SMC. The Kinshasa, DRC native scored five points in the win over the SMC Lady Pioneers.
Photo by Ken Gustafson

Sophomore Veronica Charles and Femme Sikuzani both accounted for 13 points for the Lady Jets.  Charles had four rebounds, two assists and one steal.  Sikuzani had a double-double afternoon with 13 points and 13 rebounds.

While Shida is extremely happy that she and her teammates have been able to have such a successful season and qualify for the national tournament, she knows that for the Lady Jets to make a run in the tournament for a national title, they must play even better than they did against the Lady Pioneers for that to happen. “It’s been a lot of fun, but we need to be better and play better in the next game,” said Shida.

The Lady Jets earned a sixth-place seed in the NJCAA National Tournament with the win over Spartanburg Methodist.  They are ranked behind the undefeated Jones College team that came in with the first-place ranking.  Trinity Valley is second, Chipola third, South Plains fourth, Northwest Florida State is fifth followed by the Lady Jets in sixth place. 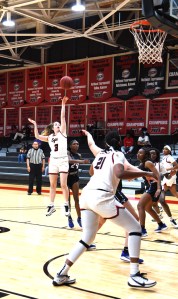 Shelton State, which SGTC beat twice during the regular season, was seeded seventh. Casper College out of Wyoming was seeded eighth and Three Rivers was seeded ninth. They were followed by Wabash Valley (10), Tyler JC (11) and Butler College (12). Georgia Highlands College, who is also a member of the GCAA, received an at-large bid for 13th.  Moberly Area was seeded 14th and Gulf Coast State finished 15th.  The teams seeded in order from 16th to 24th are as follows:  Western Nebraska, Iowa Western, Miles, Eastern Arizona, Southern Idaho, Orthro, Walters State, Independence and Eastern Oklahoma State. 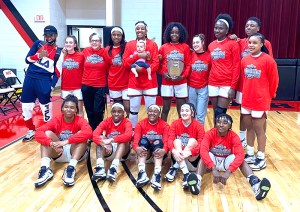 The SGTC Lady Jets pose for a team picture with their NJCAA Southeast Conference champions shirts after beating Spartanburg Methodist 87-59 in the conference championship game and punching their fifth straight ticket to the NJCAA division 1 National Tournament.
Photo by Ken Gustafson

The tournament opens on Monday, April 19 at the Ripp Griffin Center on the campus of Lubbock Christian University and the championship will be played on Saturday, April 24. The Lady Jets will play their first game of the tournament on Wednesday, April 21 at 8 pm EST against the winner between Tyler JC (TX) and Walters State JC (TN).