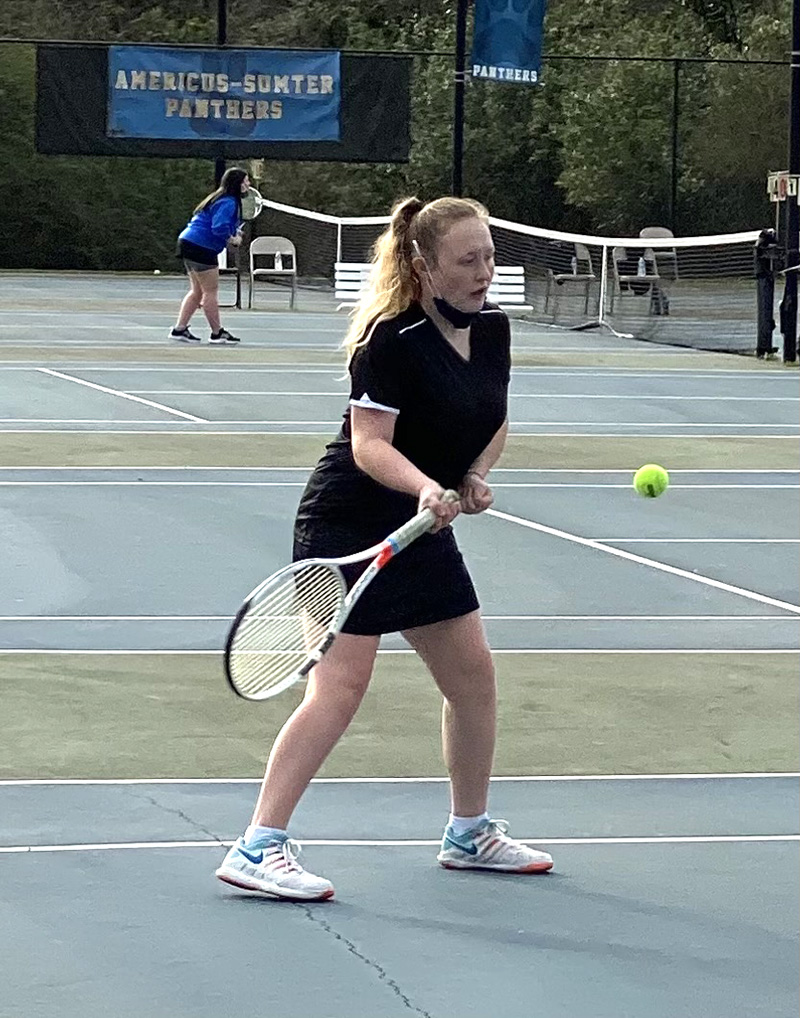 ZEBULON, GA – Back on Tuesday, March 30, the Americus-Sumter girls’ tennis team (ASHS) made the trip up to Zebulon, GA for a Region 2-AAA match against Pike County and lost by the score of 3-2. On Monday, April 12, the ASHS girls’ team made that same trek up US 19 to Pike County, but this time, they flipped the script, beating the Lady Pirates by the same score of 3-2. As a result, the Lady Panthers are headed to the Georgia High School Association (GHSA) Class AAA State Playoffs.

The Lady Panthers got started off on the right footing when Teigan Pepito defeated Ansley Brisendme in straight sets 6-1, 6-1. The Lady Panthers’ #2 singles player, Rebecca Ingle, had to fight extremely hard in her match with PC’s Lenox Hardy. However, Ingle was able to win the first set 8-6 in a tiebreaker and then won the second set 7-5 to win her match. At this point, the Lady Panthers were up 2-0 and were one win away from clinching the team match and a berth in the state playoffs.

In the third and final singles match of the day, the Lady Panthers’ Alesia Holmes won the first set 6-4 in her match against Alexis Barkey, but lost the second set to Barkey 4-6. However, Holmes was able to win the crucial third set 7-5 to take down Barkey and secure the team win for ASHS.

All that remained now were the two doubles matches and at this point, the question was whether or not the Lady Panthers could earn a 5-0 shutout victory. The ASHS doubles team of Trinity Gilliam and Melanie Wooden lost the first set against the PC duo of Kelsey Bates and Skyler Howell 4-6, but came back and won the second set 6-4. However, Bates and Howell went on to win the third set 6-4 to hand the Lady Panthers their first loss of the day. In the second doubles match, the ASHS team of Paris Eberhardt and Dionesia Westbrook-Myrie lost the first set 2-6 against the PC duo of Julianne Grubb and Audrey Brisendme, but won the second set in a 7-5 tiebreaker. In the third and deciding set of the match, Eberhardt and Westbrook-Myrie fought extremely hard, but fell by the score of 8-10. Nevertheless, the Lady Panthers were still 3-2 winners thanks to winning the three singles matches.

The ASHS boys’ team will take on Jackson at home in the Region 2-AAA Tournament on Tuesday, April 13 at 4 p.m.