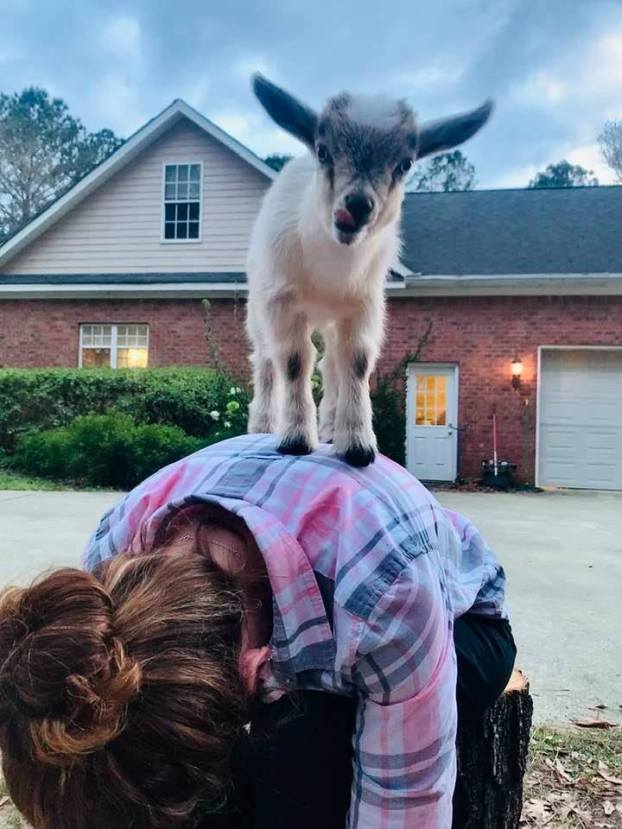 Be the goat, my friend, be the goat

My best good friend, Fred, is in love with goats. Every breath they take she wants to experience. Every sound, every fun little gait, every floppy eared moment she hangs onto. This is a new thing for her. For whatever reason she started a farm phase and in came the goats, roosters, chickens, sheep, donkeys, cats, dogs, and horses. She has always been an animal person, often relating to and tolerating them better than she does most people. Her husband, Matt, put down his foot on having anymore animals around the house some time ago. Fred begrudgingly obliged. At her house, I believe she is down to two extremely large and stupid labs who wouldn’t know how to hunt anything but a dog bed and about four cats who all have something odd about them. Lately, she added one more creature. One baby goat, less than a week old. I happened to visit their home before the goat’s one week birthday. The goat’s name is Lucas. Who knows why. Lucas has a brother and sister who get to stay at the barn with their mom. Mom didn’t care much for Lucas who is considered the “runt” of the pack. She made this known by refusing to feed him and drop kicking him across the barn. Lucas carries not even one glance of a wound over this rejection. He is pure glee. It took Fred all of 1.3 seconds to decide Lucas would come live at her home.  She did all this because, well, she is Fred.

I did not know of this development of Lucas having moved home with Fred. I needed Fred to be the best good friend because I was trudging along with a worn soul and needed to tell my story and shine some light on things hidden in darkness. I called her to tell her COVID or not, I was coming to visit. I didn’t care if she changed the sheets, she could expect me to show up for the weekend. Fred’s response? “Sure, but you will be sleeping with a goat.” If you knew Fred like I know Fred, you would realize having to sleep with a goat in her very fancy house didn’t even put a blip on my “well, isn’t this odd?” radar. I pulled up in her driveway, walked into the house and there was my little Fred family: Fred, her husband Matt, and her daughter, Baby Fred. Along with them, those two inane labs, several distorted cats and little Lucas in a crate. It became abundantly clear I was going to have to put my worn-out soul on hold. Everything was about Lucas. Everything. At one point, Fred pulled out all of Baby Fred’s old clothes and began cutting them up so Lucas would not be running around the house naked. It is exceedingly difficult to have a soul letting with Lucas in the atmosphere. Evidently, Matt had also resigned himself to the fact he was living in Lucas’ house. I looked at Matt and asked him, “How did we get here? I remember you very clearly putting your foot down about anymore animals in this house. Now we got a goat, Matt. Look at the words coming out of my mouth Matt—a goat. We got a goat.” Matt simply said, “Yep. A goat.”

I heard every story of Lucas’ one week life. It was heartbreaking. Why isn’t this goat lamenting his 6-day old life?  I sat around watching Lucas be a gleeful goat for the rest of the evening. I resigned myself to the fact I would hold my inner gremlins for another night. I did this in the face of the orphaned and rejected Lucas being about as happy a creature as I have ever witnessed. Everything he did oozed joy and I couldn’t help but love him for it. I told the Fred family goodnight and went to my room to keep the gremlins’ company once again. Gremlins love to stir up fear, resentment, pity, and grief. Gremlins are not good company, but they are powerful in their demands, so I cater to them. On this night, I left my best good friend, her sweet little family and Lucas the joyful rejected goat to go listen to my gremlins. Sometimes my ability to make good decisions proves to be a weak muscle. I had more gremlins than Fred had animals. You’d seek out a place to sleep them off too if you had that many. Fred would just have to forgive my bad company for the night.

But here’s the thing. While I was up feeding the gremlins, Lucas, the little rejected runt goat was soaking up life, living fully into his joy, and delighting the people I love. His story was known, he saw no shame in it, he fully trusted he would be provided for in the days ahead. He was not wailful of his situation. He was marinating in the adoration freely given him. All this love just because he was Lucas. He was downstairs living it up, accepting the gifts around him while I was upstairs clinging to a story I was too afraid to tell, keeping company with some very dark thoughts. How is it I am not as smart as a less than a week-old goat? How is it a goat’s constitution is geared towards honesty and joy while mine was hidden away and heavy? Surely there is a lesson here.

I got up insanely early. I went downstairs, had a bowl of Cheerios and checked in on Lucas. He was sleeping, probably exhausted from all his play. I looked at him and asked him how he got it so right and I got it so wrong? Through his sleeping goat noises he said, “I don’t know I am just a goat.”  I went back to my borrowed bedroom and thought about Lucas. I fell back asleep but with one thought. Upon wakening again, I will get Fred’s ear before she starts her day and tell her of the gremlins, tell her my story. I did just that. I gave her time to pour a cup of coffee, and then I poured out on her. I don’t know what Fred said, it really didn’t matter, what mattered was she was there, and I got to tell my truth.  The answer, strangely enough, was my best good friend and how she took a runt goat, who surely would have died without her, and brought him from the barn to the big house and cared for every little need he had, including his nakedness. The answer came too from a 6-day old rejected goat who literally danced ecstatically in her care. Surely if this goat is worth that kind of love and attention from my Fred, I was worth at least the same love and attention from the One who looks over me.

Fred steady sends me goat pictures and videos. Recently she sent one of Lucas doing that trademark goat gallop which is the purest unbridled joy I’ve ever witnessed.  Fred texted, “I don’t know why I love them so much, but I do.”  I responded back to her she loved them because they are a picture of what God intended us to be. They are the picture of exultation we are called to be.  Then I added, “From now on Fred, when one of us catches a gremlin, we call him by name, we work through him, we banish him, then we remind each other, ‘Be the goat Fred, be the goat.’” Are you wrestling your own gremlins? Go ahead and name him. Look him in the eye. Shine the light on him. Banish him to the One who swaps gremlins for joy. You are in exceptionally good hands. So good, if you caught a glance of those hands, your very way of walking around in the world would be testimony to your delight. Be the goat, my friend, be the goat.

I have a crown on my house. As much as I love architectural detail, I am completely stupid at calling... read more