Americus-Sumter junior Rebecca Wood finished in fifth place in the Girls’ 800-Meter Run at the Westover Relays in Albany on Tuesday, April 13. Wood also set a new PR (personal best) for herself by finishing the event in a time of 3:00.90. Her previous PR this season was 3:45. Photo by Shanika Dyson

ALBANY – The 2021 Westover Relays were supposed to take place at Hugh Mills Stadium in Albany on Friday, April 9, but due to inclement weather, they were rescheduled for Tuesday, April 13. This postponement gave the Americus-Sumter (ASHS) and Schley County (SCHS) boys and girls track and field teams extra time to prepare for the event and according to the results, both team and individual, the extra time to prepare paid off. Both the Schley County teams finished in second place, while the Americus-Sumter boys and girls finished in fifth and sixth place respectively.

Several student-athletes from both schools turned in high marks and a few of them set new PRs (personal best times/distances).

As far as Pinckard was concerned, the SCHS senior continued the good work that he has been doing his entire high school career. Pinckard turned in a first-place finish in the 3200-Meter Run and finished in a time of 11:30.27. Pinckard’s teammate, Dustin Howard, wasn’t far behind. Howard finished in third place in the event with a time of 12:06.66.

As far as the Panthers were concerned, their athletes turned in high marks as well. In the 400-Meter Dash, Braylon Green finished in second place and posted a new PR of 49.83. The Wildcats’ John Lightner was also in that event and finished in 10th place in a time of 57.61.

In the 300-Meter Hurdles event, Tyler Vickery was able to turn a strong showing by finishing in third place in a time of 17.68. Vickery also turned in a PR in the Discus event as he finished in fifth place with a new best distance throw of 108-10.00. 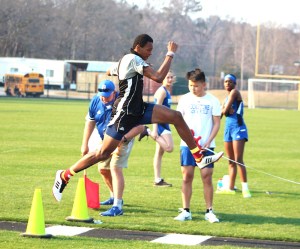 In addition to his top-notch performance in the running events, Clinton Jackson also had a strong showing in the field events as well. In the Long Jump, Jackson won the event by jumping a distance of 20-07.00. Jackson also excelled in the Triple Jump, finishing in second place with a distance jump of 41-01.00. Jackson also took home the trophy for the High Point Award, which goes to the athlete who scores the most individual points in a meet.

In the Pole Vault event, two Wildcats turned in strong showings. Levi Johnson won the event, as he was able to reach a height of 10-06.00. His teammate, Matthew Nguyen, finished in fourth place in the event by reaching a height of 8-00.00. 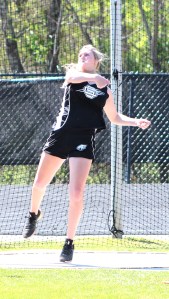 Schley County’s Rene Rix competes in the Discus event at the Westover Relays. Rix finished in second place in the event and turned in a new PR by making a distance throw of 94-04.50.
Photo by Sheila DeVane

In girls’ action, several ASHS and SCHS athletes did extremely well in this meet and several turned in some new PRs. Southland Academy also had one student-athlete win an event. Jadie Burrell, who was the only SAR athlete to compete in the Westover Relays, won both the Girls’ 800 and 1600-Meter Run. Burrell finished the 800 in a time of 2:37.16 and she finished the 1600 in a time of 6:06.87.

The Lady Panthers had several athletes turn in PRs in this year’s Westover Relays.

Before the meet, Junior Rebecca Wood’s previous PR in the 800-Meter Run was 3:45, but she was able to set a new PR of 3:00.90 in the event and finished in fifth place. Wood also set a new PR in the Girls’ High Jump by jumping a height of 4-00.00 and finishing in fourth place. Wood’s teammate, Cyniah McCrary, finished just ahead of Wood in third place by jumping a new PR (personal best) of 4-02.00. 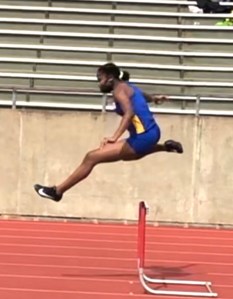 Jakiera Pride also posted a new PR in this meet. In the 200-Meter Dash, Pride’s previous PR was 29.90, but in Tuesday’s Westover Relays, Pride was able to shave her time down to 27:34, which was good enough for a third place finish. Pride’s teammate, Jasmine White, also set a new PR in the 200-Meter Dash by running a time of 30:24. White was able to hold off Nyah Rogers of Dougherty for sixth place.

Selliyah Owens was not able to compete for the Lady Panthers as she is recovering from an injury. 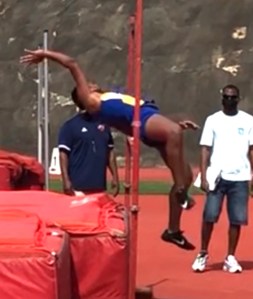 Americus-Sumter’s Cyniah McCrary competes in the Girls’ High Jump competition at the Westover Relays. McCrary finished in third place in the event and set a new PR for herself, jumping a height of 4-02.00.
Photo by Shanika Dyson

In the Girls’ 300-Meter Hurdles, Daneria Thornton of SCHS finished in third place and set a new PR of 53.45. Thornton’s teammate, Perri DeVane, won the Girls’ Pole Vault event by vaulting a height of eight feet.

Dasani Minter, who finished in second place in the Girls’ 100-Meter 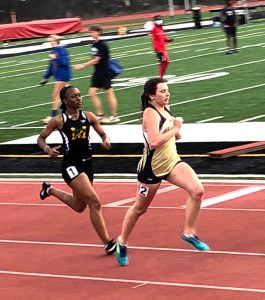 Southland Academy’s Jadie Burrell (gold jersey) won both the 800 and 1600-Meter Runs at the Westover Relays in Albany.
Photo by Carol Burrell

In the Discus event, the Lady Wildcats once again were able to have two of their student-athletes place in the top 5. Rene Rix finished in second place with a distance throw of 94-04.50 and her teammate, Sarah Barnhill, finished in fifth place with a distance throw of 78-06.50. Both Rix and Barnhill were able to set new PRs for themselves in the Discus event. 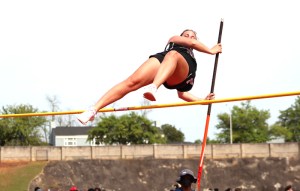 Schley County’s Perri DeVane competes in the Girls’ Pole Vault event at the Westover Relays. DeVane won the event by clearing a height of 8-00.00 (eight feet).
Photo by Sheila DeVane

Overall, the coaches of both the ASHS and SCHS teams were very pleased with the efforts of their student-athletes. “The girls performed exceptionally well for this to their first major meet of the season,” said ASHS Girls’ Head Coach Shanika Dyson. “I have a very young team and they have a tremendous amount of potential that I look forward to seeing n the years to come. Cyniah (McCrary) did very well to be a freshman with her learning all of these events that’s she’s never done before and is performing well in them. She earned her first medal ever and that is much to be celebrated.” Dyson was equally pleased with the performances and growth of Jakiera Pride and Rebecca Wood. “Jakiera Pride (also a freshman) performed very well,” said Dyson. “She received her first medal as well and her personal best. I was not expecting that, but happy to see it. I am extremely proud of Rebecca. She ran for me during cross country and the things that she’s learned during that time has transferred onto the track and it reflects in her training and her performance.
I am proud of all of them because while we are a small team this year. We are still here despite the obstacles and they have worked hard to achieved the goals we talked about and now we have to make new goals to work towards, which is always exciting. I am very proud of them,” Dyson continued. 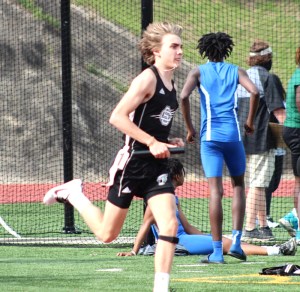 Schley County’s David Williams is seen here competing in one of the relay events at the Westover Relays in Albany. Williams also competed in both the 800 and 1600-Meter Runa. Williams won the 1600m event in a time of 4:55.37 and finished second in the 800m with a time of 2:10.77.
Photo by Sheila DeVane

As far as the Wildcats and Lady Wildcats are concerned, head coach Scott Burgess was particularly pleased with how well his athletes competed against schools that are much bigger in size. “I am very happy and proud for our athletes to be able to compete and even win several events against schools that are much larger than us,” said Burgess. “It is always good for us to get to go to Hugh Mills and compete there because that is where we will have our region and state Meets at.  Hopefully, this meet will give our athletes some confidence as we will be having our region meet there in two weeks as they have seen that they can go there and beat some of their PRs. “