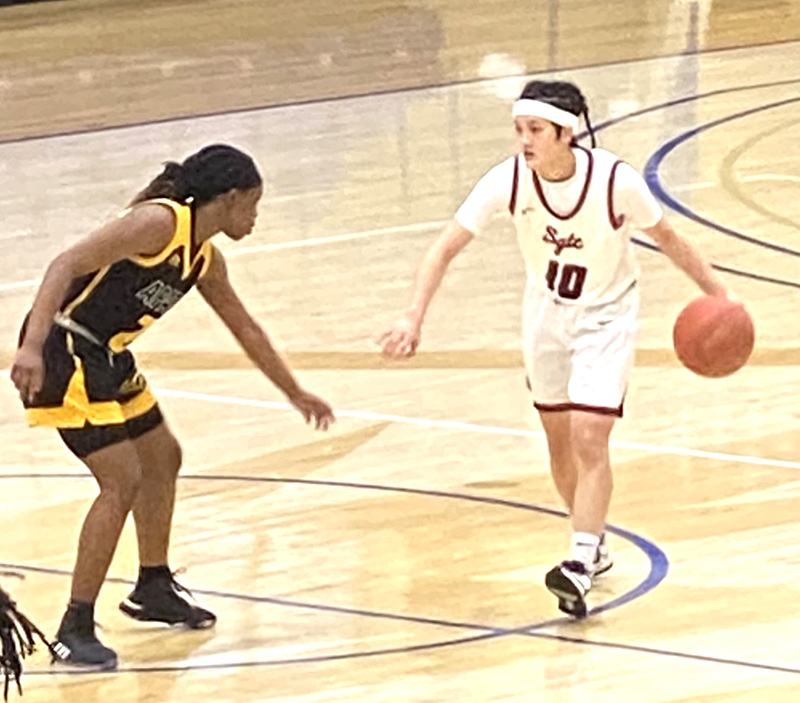 Moe Shida (#10) is shown bringing the ball down the court against Tyler Junior College in the NJCAA National Tournament in Lubbock, Texas. ATR Archive

LUBBOCK, TX – It’s been two years since the South Georgia Technical College Lady Jets Basketball Team (SGTC) made the nearly 1,200-mile journey from Americus, GA to Lubbock, TX for the National Junior College Athletic Association (NJCAA) Division 1 National Tournament. Due to the start of the COVID-19 Pandemic a year ago, the 2020 tournament was canceled. Having qualified for this year’s tournament for the fifth straight time and getting a first-round bye, SGTC was hoping for a win over the Apaches of Tyler Junior College (TX) on Wednesday, April 21. However, the Lady Jets (22-4) got off to a sluggish start in the first quarter and it was too much to overcome as the Apaches (21-4) would go on to defeat SGTC 72-53 in the second round of the tournament on Wednesday, April 21 at the Rip Griffin Center on the campus of Lubbock Christian University.

At the end of the first quarter, SGTC was behind 19-6, but for the remainder of the game, the Lady Jets were evenly matched with TJC as they were outscored 53-47 over the next three quarters. However, the sluggish start in the first quarter turned out to be their undoing.

While the Lady Jets were able to earn the first round bye in the tournament and avoided having to play in the first round, like the Apaches had to do, SGTC Head Coach James Frey believes that the two-week layoff that his squad had really affected how they played against TJC. Before Wednesday night’s NJCAA Tournament game against the Apaches, the last time the Lady Jets played a competitive game was on Saturday, April 10 when they defeated Spartanburg Methodist Junior College 87-59 at the Hangar in the NJCAA Southeast District Championship to claim the school’s fifth straight NJCAA Tournament berth.

“I really do think that having the two-week layoff and them (TJC) playing yesterday and having that game under their belts really helped them,” Frey said. “They had a game in this gym. They had shots taken. Like I said, we’re coming off a two-week layoff and we really looked rusty and flat. They (TJC) didn’t do anything we didn’t expect them to do. Offensively, we knew what they would do. We knew how to play it. We just didn’t. We were really lethargic starting the game,” Frey continued. 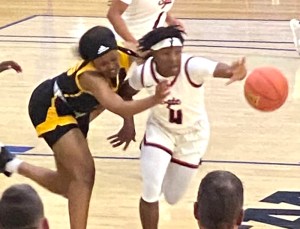 While the Lady Jets had the first round bye, TJC got an advantage by playing a first round game in the Rip Griffin Center on Tuesday, April 20. In that game, they defeated Walters State (TN) 72-60 to advance to the second round to play the Lady Jets.

This was a game in which SGTC struggled to get out of the gate, while the Apaches hit the ground running. Though the Lady Jets tried their best to get back in the game after the sluggish first quarter, they continued to struggle with poor shooting and turnovers, as well as giving up too many second chance offensive rebounds to TJC. 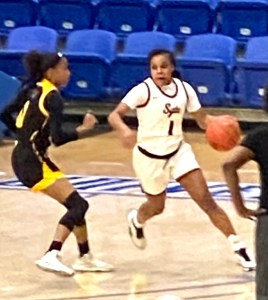 The one key category that SGTC struggled in all night was turnovers. The Lady Jets turned the ball over 14 times, while the Apaches had only eight turnovers for the game. The Lady Jets were also outscored in the paint 32-20.

TJC had three players score in double figures. Taryn Wills led the Apaches with 17 points and Veonce Powell had 16, including four three-pointers. Deborah Ogayemi posted a double-double for the Apaches by scoring 12 points and grabbing 14 rebounds and Tia Morgan chipped in nine points in the winning cause.

SGTC fell behind early in the first quarter 16-3. The Lady Jets were struggling to score the basketball and they were committing turnovers in the early going. 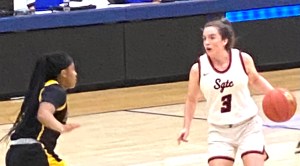 After several minutes, The Lady Jets finally stopped their scoreless streak when Abby Solway nailed a three-pointer, but the Apaches closed out the first quarter with a near half-court three-pointer at the buzzer by Tia Morgan to give themselves a 19-6 lead over SGTC.

Over the first three minutes of the second quarter, the Lady Jets outscored TJC 5-2, but Nala Hemingway would give the Apaches a 23-11 lead on a short jumper.

The Lady Jets continued to struggle offensively in the second quarter, being unable to hit shots. They were also struggling defensively and were giving up several second chance rebounds to the Apaches. With just four minutes left before halftime, the Lady Jets found themselves down 33-13.

With a little over two minutes left to play before halftime, the Lady Jets trailed 36-13 until Veronica Charles got a steal, drove to the basket and scored. Charles would later hit a three-pointer with under a minute left, making the score 40-18 TJC.

The Lady Jets were able to score six unanswered points to close out the first half, but they had a big hole to climb out of, trailing 40-24 at halftime.

In contrast, the Apaches made 15 of 36 shots (41.7 percent) in the first half and made 7 of 14 shots from beyond the arc (50 percent). Another category that the Lady Jets were getting beat in during the first half was points in the paint. The Apaches were able to outscore SGTC 12-4 in that category. 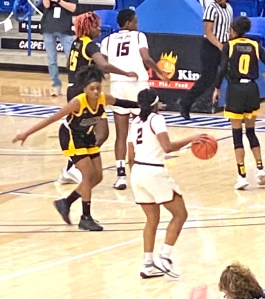 SGTC freshman point guard Maikya Simmons (2) scored four points, dished out two assists and had one steal in the Lady Jets’ loss to Tyler JC in the second round of the NJCAA Division 1 National Tournament.
Photo by Ken Gustafson

The Lady Jets scored the first four points to start the second half, but Veonce Powell pushed the TJC lead back up to 43-28 with a three-pointer. Over the next few minutes of the half, both teams were trading baskets, but the Lady Jets seemed to be coming to life as their scoring was picking up slightly. However, they were also missing several easy shots during the third quarter and were committing turnovers.

By the start of the fourth quarter, SGTC found itself down 51-35 with its season hanging in the balance.

This gave the Apaches the opportunity to close out the game, which they did by outscoring the Lady Jets 15-12 over the final minutes. 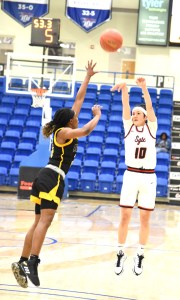 Like the rest of her teammates, SGTC freshman guard Abby Solway, who is normally and excellent three-point shooter, struggled on the night as she went 2 for 5 and scored only six points. However, Solway credits TJC for making a statement early and making it extremely difficult for her and her SGTC teammates.

While their season ended with a disappointing loss to TJC in the NJCAA Tournament, Coach Frey and the SGTC Lady Jets have much to be proud of, especially being able to accomplish what they accomplished in the midst of the COVID-19 Pandemic. 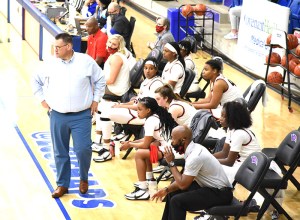 SGTC Head Coach James Frey paces the sidelines trying to figure out how to jump start his club after the Lady Jets fell behind 19-6 in the first quarter against Tyler JC.
Photo by Su Ann Bird

“I love my team. I love what we’ve been through together with COVID,” Frey said. “We didn’t have a single case of COVID in our program, men’s or women’s this year.

We pretty much had them in the bubble on campus all year long and they did exactly what we asked them to do. I don’t know if you can find another college program in the country that did not have one single case of COVID in their program and we didn’t. I’m proud of them. I’m proud of them for doing all the little things we asked them to do. Losing here is tough. We had high expectations coming out here. There are some hurt young ladies right now, but we’re going to love them up and build them up and get them back to work,” Frey continued.

Coach Frey went on to say that he and his staff will now focus on getting the sophomore players moved on to four-year colleges to continue their educational and basketball careers, as well as getting the returning SGTC players back to work and, hopefully, back to the 2022 NJCAA Division 1 National Tournament.