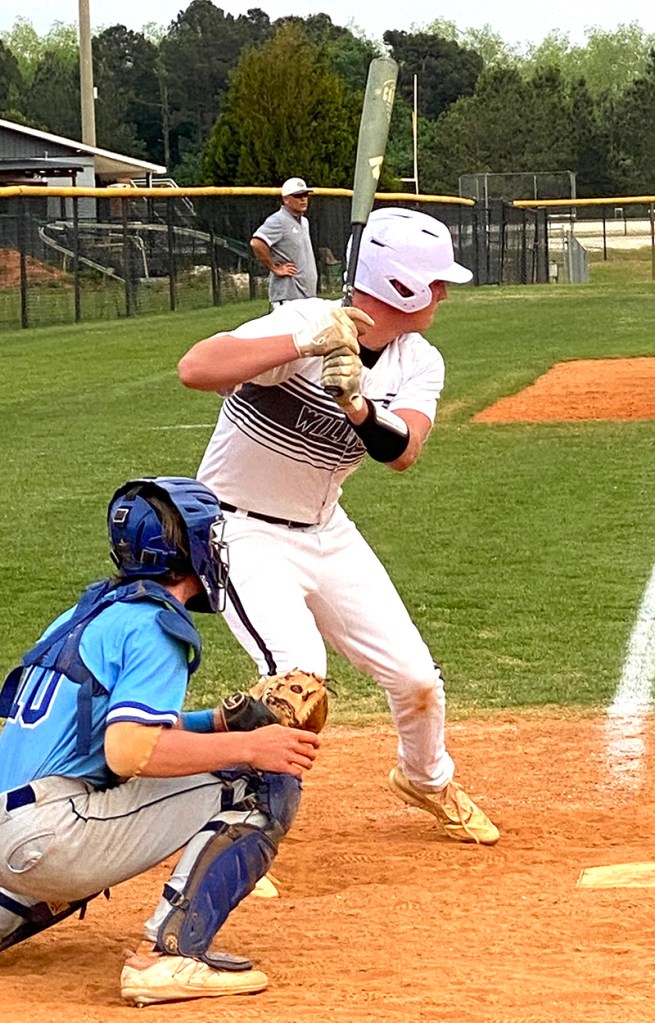 Schley County designated hitter Tyler Cheek drove in the tying run on an RBI single in the bottom of the seventh inning to bring the Wildcats even with Brookstone at 6-6. Photo by Ken Gustafson

ELLAVILLE – According to Schley County Head Baseball Coach Chuck Cheek, the Brookstone Cougars (19-8) were the best team that his club has faced all year. On Friday, April 23, they showed why as they outlasted SCHS 8-6 in eight innings at Schley County High School in the Wildcats’ final regular season game.

SCHS was trailing 6-5 in the bottom of the seventh inning, but with two outs and a runner at second base, Tyler Cheek drove home the tying run on an RBI single. Owen Shufflebarger was then able to draw a walk from BKS relief pitcher Adam Lowery, putting the winning run at second base. However, Carson Westbrook grounded into a fielder’s choice to end the inning.

The Cougars were able to take advantage in the top of the eighth. With a runner on second base and two outs, Drew Albright was able to drive in Buddy Denson for the go-ahead run on an RBI single. After Lowery reached on an error, Albright, who had already advanced to third on the same error, scored on a passed ball to give the Cougars an 8-6 lead.

The Wildcats (19-7) tried to mount a come-from-behind victory in the bottom of the eighth. However, Dylan Taylor Flew out and both Trypp Lumpkin and Jack Clark grounded out to end the game.

“Tyler got the big hit for us and tied the game up,” Cheek said. “We scored on a passed ball and tried to bring the next guy in in the inning before that, but their guy was where he was supposed to be, made a good throw and got us at the plate.” 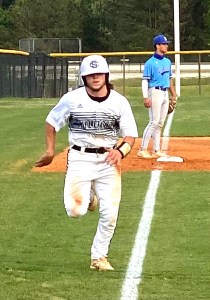 Schley County centerfielder Luke Renfroe scores on of his three runs in the Wildcats’ 8-6 loss to Brookstone.
Photo by Ken Gustafson

Coach Cheek was referring to a play in the bottom of the sixth inning in which Carson Westbrook scored on a passed ball to bring the Wildcats to within one run at 6-5, but Owen Lamb was thrown out trying to score on that same play. Had Lamb made it safely, the game would have been tied at 6-6 at that point.

“I really thought that ball that Carson hit there in the bottom of the seventh was going to bounce over the third baseman’s head, but it didn’t,” said Cheek. “They’re probably the best team that we’ve played this year. This is always a big rivalry game for us. I hate that they’re not in the region with us anymore. We always look forward to playing them because we know it’s going to be great competition. They’ve got really good players and great coaches.”

Coach Cheek went on to say that he was very pleased with how his squad competed in this game against the Cougars, being that BKS has seven players that will go on to play at big time college programs. “We were a little short handed tonight and we had some guys that stepped in there and made some plays,” Cheek said. “I’m proud of those guys and if we can compete like that and bring that kind of effort and intensity in the playoffs, I think that we’re going to be ok.” 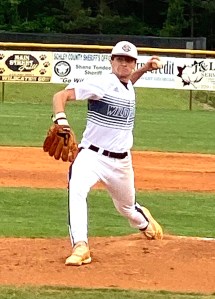 Both Dylan Taylor and Trypp Lumpkin led the Wildcats’ offense by each of them going 2 for 5 at the plate and driving in a run. Luke Renfroe went 1 for 3 with a single, while Westbrook, Cheek and Tucker Welch each went 1 for 4 on the day. Cheek’s one hit in the game was the game-tying RBI single in the bottom of the seventh.

Lumpkin had another strong performance on the mound for the Wildcats. In five innings of work, Lumpkin gave up six runs on six hits, but struck out nine batters while walking three.

Taylor came on in relief of Lumpkin and pitched the last three innings. In those three innings, he gave up two runs on three hits and struck out five BKS batters.

However, the Wildcats would respond. In the bottom of the fourth with a runner on second and one out, Owen Shufflebarger reached on an error that allowed Renfroe to score the Wildcats’ first run of the game. After Westbrook popped out to third for the second out, Taylor doubled to left field, scoring Shufflebarger and putting the Wildcats to within two runs at 4-2.

The Cougars added two more runs in the top of the fifth on three hits, but SCHS struck back with three runs of their own in the bottom of the sixth. With one out and Renfroe at third, Shufflebarger was able to reach on an error that allowed Renfroe to score. Westbrook then came up with a single to left field, putting runners at first and second with one out. Taylor struck out for the second out of the inning, but Lumpkin drove in Shufflebarger on an RBI single, making the score 6-4 BKS. 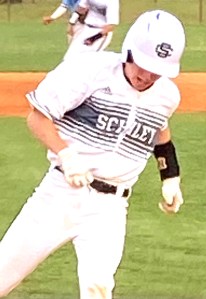 Schley County second baseman Carson Westbrook scores a run on a passed ball to bring the Wildcats to within one run of Brookstone at 6-5.
Photo by Ken Gustafson

After Jack Clark reached on an error, Westbrook was able to score on a passed ball. Unfortunately for the Wildcats, Owen Lamb tried to score the tying run on that play, but was thrown out at home for the third out of the inning.

The Wildcats faced some very strong pitching from the Cougars in this game. Middleton, who has committed to Auburn, struck out 10 SCHS batters and gave up two runs on five hits in five innings of work. Lowery came on in relief of Middleton. In two innings of work, he gave up four runs on three hits, struck out three batters and walked one.

“They (BKS) are solid all the way around,” Cheek said. “They’ve got really good hitting, pitching and defense.”

In addition to his strong pitching performance, Taft Middleton led the Cougars in hitting as well. He went 2 for 4 at the plate with two doubles, two RBIs and a run scored.

Now that the regular season is over with, the Wildcats will turn their attention to the Georgia High School Association (GHSA) Class A-Public State Playoffs. SCHS will host Lake Oconee Academy (13-10) on Thursday, April 29 in a doubleheader as part of a best-of-three-games series. The first pitch of Game 1 is scheduled for 4 p.m.