Southland Academy Raiders get swept by Tiftarea in doubleheader 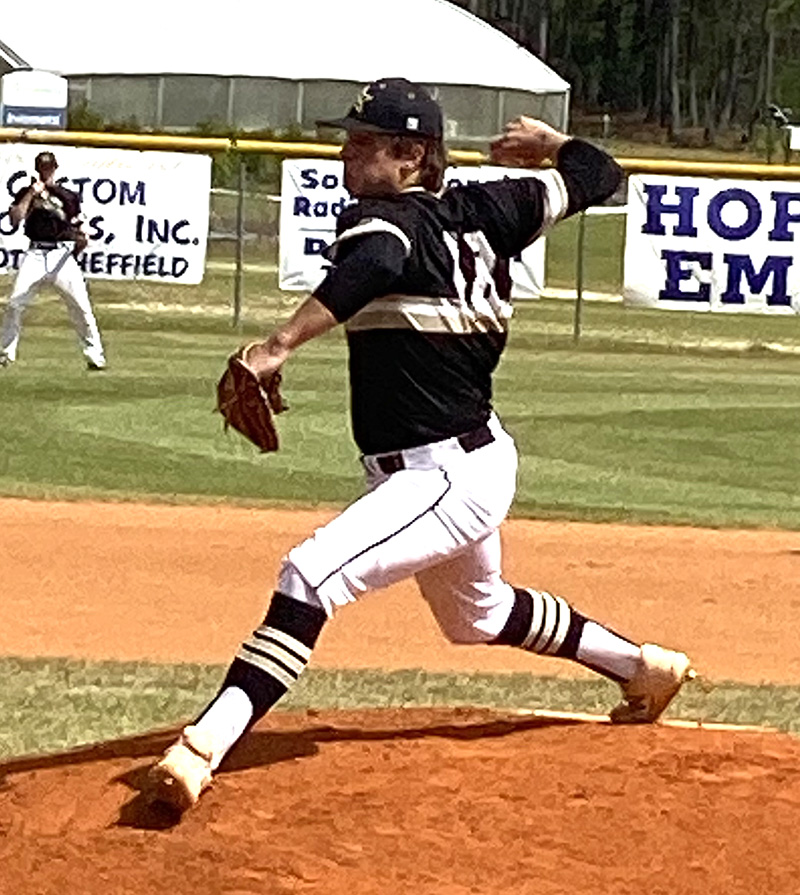 Southland Academy starting pitcher Chase Ledger struck out five batters in the Raiders’ 4-2 loss to Tiftarea Academy in Game 1 of a doubleheader. Photo by Ken Gustafson

CHULA, GA – After the Raiders’ disappointing performance in an 11-1 loss to Terrell Academy a week ago, Southland Academy (SAR) Head Baseball Coach John Brady told the Americus Times-Recorder that he expected his club to compete and to give maximum effort against the Panthers of Tiftarea Academy (TA) on Wednesday, April 28.  However, though they did exactly that, the Raiders came out on the short end, losing both games of a doubleheader to the Panthers by scores of 4-2 and 5-1 at the TA baseball complex in Chula, GA.

In sweeping the doubleheader with SAR, the Panthers (15-8, 7-2 Region 3-AAA) claimed the GISA Region 3-AAA Championship, while the Raiders (10-11, 2-7 Region 3-AAA) finished in third place in the Region 3-AAA standings behind region runners-up Brookwood.

“We competed hard. We got beat in two games by a good team,” Brady Said. “We left some opportunities on the base paths. There was a play or two here and there that we didn’t make. If we make them, you know, maybe it’s a different ball game. We had a lot of tough luck in the first game. It’s 2-2 and they hit two little flares with two outs, then get a base hit and score a couple of runs. We had some tough luck, but sometimes, you’ve got to make your own luck and we just didn’t do enough of that today and they’ve got a good team.” 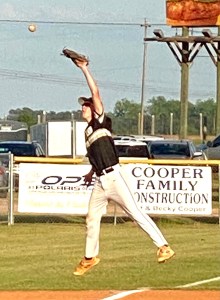 In Game 1, the Panthers jumped out to a 2-0 lead in the bottom of the first inning. Hayden Murphy led things off with a single against SAR starting pitcher Chase Ledger. Jayk Sailer then doubled home Murphy to give TA a 1-0 lead. Ledger struck out Levi Stanfill and got Logan Moore to fly out, but Brock Hammond drove in the Panthers’ second run on an RBI single.

However, the Raiders responded in the top of the second. James Griffin led off the inning with a single and then stole second base. Buddy Brady was able to reach on an error that allowed Griffin to score. After Will Godwin popped out in foul territory, Brady was able to advance to second on a passed ball. Hudson Collins then singled to centerfield, putting runners at the corners for SAR with one out. 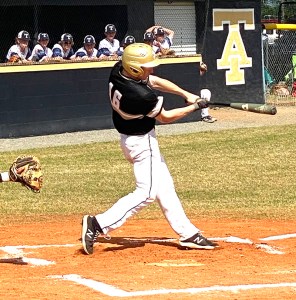 Southland Academy left fielder Hudson Collins went 2 for 3 at the plate with two singles in Game 2 against Tiftarea Academy.
Photo by Ken Gustafson

Collins was able to steal second base before Nathan Duke struck out for the second out of the inning, but Henry Johnson got hit by a pitch to load the bases with two outs for Owen Exley. However, before Exley would have a chance at the big RBI hit, Brady scored the tying run on a passed ball. Exley then flew out to centerfield to end the threat, but the Raiders had tied the game at 2-2.

In the bottom of the fourth, however, the Panthers retook the lead by scoring two runs on three hits. The damage came with two outs as Matthew Malone singled and John Austin Lee drove him in on an RBI double. Jam Presley would later add an insurance run when he drove in Lee on an RBI double. 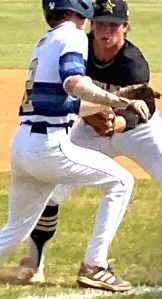 Southland Academy pitcher Chase Ledger tags out a TA runner on his way to first base.
Photo by Ken Gustafson

Though the Raiders were able to put runners in scoring position in the fourth and sixth innings, they were not able to get the clutch hits needed to drive in runs and fell to the Panthers 4-2 in Game 1.

Ledger went the distance on the hill for the Raiders. He struck out five TA batters, but gave up four runs on seven hits and walked one.

The Raiders struggled to come up with offense against TA starting pitcher Ben Matt and reliever Hayden Murphy. James Griffin and Hudson Collins were the only two Raiders to come up with hits in this game. Both went 2 for 3 with two singles, while Griffin was able to score a run. 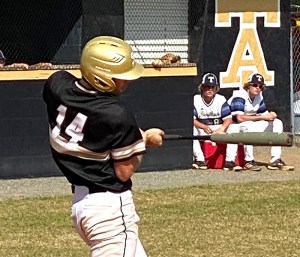 John Austin Lee led the Panthers’ offense in Game 1 by going 2 for 3 at the plate with a single, an RBI double and a run scored.

Ben Matt started on the mound for the Panthers. In a little over five innings of work, he gave up two runs on four hits, walked one batter and struck out three.

Hayden Murphy came on in relief of Matt and struck out three SAR batters in one inning of work.

Being that this was a doubleheader, the Raiders didn’t have time to wonder what might have been. They had to quickly focus their attention on trying to salvage a win in this doubleheader. 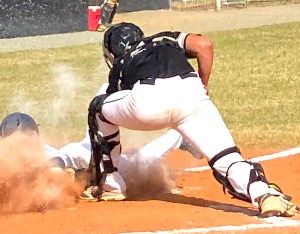 Southland Academy catcher Will Godwin tries to tag out a TA runner sliding into home plate during Game 1 of the Raiders’ doubleheader with Tiftarea Academy.
Photo by Ken Gustafson

During the first three innings of Game 2, both teams went scoreless, but the Raiders had opportunities to score. In the top of the first inning, Nathan Duke led things off with a single against TA starter Logan Moore. However, Moore got Henry Johnson to ground into a fielder’s choice and struck out Exley. Duke, who had reached second on Johnson’s fielder’s choice, stole third to give the Raiders a chance at an early lead. However, Moore got Chase Ledger to fly out to centerfield to end the threat.

In the top of the third, the Raiders once again had a runner in scoring position, but ended up on the wrong end of a controversial call. Will Godwin led off the inning with a double and Hudson Collins attempted to lay down a sacrifice bunt to advance Godwin to third. Collins laid down the bunt and was tagged out, but the umpire ruled the Collins interfered with the infielder that tagged him out by not allowing him to throw over to third base. Thus, Collins was called for offensive interference and Godwin was ruled out on appeal. Instead of the Raiders having a runner at third wit one out, the bases were empty with two outs. The call was extremely displeasing to the Raiders and their fans in attendance, especially being that Nathan Duke followed Collins with a single, which would have scored a run. Johnson was then hit by a pitch, putting runners at first and second for the Raiders with two outs. However, Exley grounded out to shortstop to end the threat and another opportunity for SAR to score runs went by the boards. 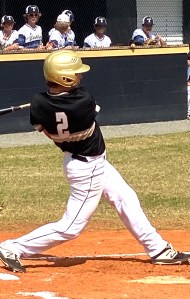 Southland Academy right fielder James Griffin went 2 for 3 with two singles and a run scored in the Raiders’ 4-2 loss to Tiftarea Academy in Game 1 of a doubleheader.
Photo by Ken Gustafson

TA added two more insurance runs in the bottom of the fourth on two hits. Though the Raiders were able to get runners at first and third in the top of the seventh inning with two outs, Moore was able to strike out Ledger to end the game to secure the Panthers’ 5-1 victory and their region championship. 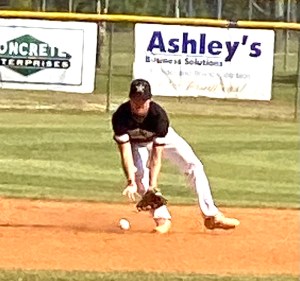 Will Godwin went 2 for 3 at the plate with a double, a single and an RBI to lead the Raiders’ offense in Game 2. Duke also had a strong game at the plate for SAR by going 2 for 4 with two singles.

Perry Usher started on the hill for the Raiders in Game 2 and went the distance. In six innings of work, Usher gave up five runs on six hits, struck out three batters and walked one.

“I’m proud of us for competing. We showed a lot of guts today,” Brady said. “We will see the brackets tomorrow (Thursday, April 29) and be ready to play who we’ve got on Monday.” 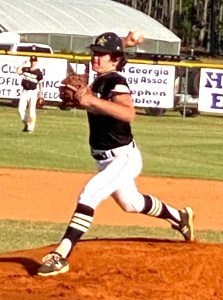 Southland Academy starting pitcher Perry Usher got the ball in Game 2. He gave up five runs on six hits, but struck out three batters in the Raiders’ 5-1 loss to the Panthers.
Photo by Ken Gustafson