Schley County starting pitcher Trypp Lumpkin pitched a no hitter and struck out 13 batters in the Wildcats’ 7-0 win over Lake Oconee Academy in Game 1 of the first round of the GHSA Class A-Public State Playoffs. Photo by Ken Gustafson

ELLAVILLE – The Schley County High School Baseball Team (SCHS) took care of business on Thursday, April 29 by sweeping the best of a three-game series over Lake Oconee Academy (LOA) at home in the first round of the Georgia High School Association (GHSA) Class A-Public State Playoffs. Thanks in part to Trypp Lumpkin’s no hitter in Game 1 and home runs belted by Dylan Taylor in each game, the Wildcats were able to win the first two games over the Titans by scores of 7-0 and 16-2 to advance to the second round against Crawford County.

As far as offense was concerned, SCHS Head Coach Chuck Cheek wasn’t entirely sure which group of Wildcats would show up on Thursday, being that the offense had been inconsistent of late. “We haven’t played as consistent as I would like for us to, but the right team showed up tonight,” Cheek said. “A lot of what we do starts with Dylan (Taylor). When he’s hot and playing well, everybody else seems to play well.”

In the bottom of the first inning of Game 1, Taylor sent a message loud and clear to the Titans by firing the first of a series of salvos by the Wildcats. He led off the inning with a home run over the centerfield wall off LOA starting pitcher Owen Etris. Etris was able to retire the next three SCHS batters, but a message had been sent by the Wildcats, quite literally right off the bat, that today would be their day.

“He (Taylor) got us started off with a laser that got out of here,” Cheek said. “Their No. 1 Etris that was pitching, he’s had a lot of success this year. He’s logged the most innings. He’s been their ace all year. He’s beaten some good teams so we knew that he was going to have pretty good velocity and he throws three pitches for strikes. It took us a little bit of time to get to him.” 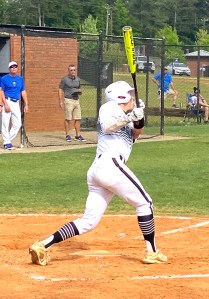 Schley County’s Dylan Taylor led off Game 1 with a home run and belted another home run in Game 2 to help lead the Wildcats’ offense against Lake Oconee Academy.
Photo by Ken Gustafson

Lumpkin could not have been more dominant on the mound for the Wildcats. The junior lefthander tossed a no hitter and struck out 13 LOA batters to lead SCHS to the 7-0 victory over the Titans in Game 1.

“It still goes back to pitching for us,” Cheek said. “Trypp was really good. I would have liked to have pulled him a little earlier when we got the lead, but when you’ve got a kid working on something like that, you can’t take him out. We wanted to maybe save some pitches for if there was a Game 3, but like I said, it’s one of those things you don’t talk about during the game when you’ve got a no no going on.” 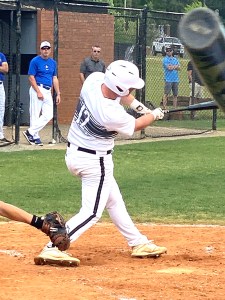 Schley County third baseman Athon Hines went 2 for 5 with three RBIs and a run scored two help lead the Wildcats to a two-game sweep of the LOA Titans and a berth in the second round of the GHSA Class A-Public State Playoffs.
Photo by Ken Gustafson

After Taylor’s home run in the first inning, the Wildcats scored another run in the second and three more in the third to take a 5-0 lead. The big hits in the third came off the bats of Owen Lamb and Clark. Lamb drove in a run on an RBI double and Clark drove in the Wildcats’ fifth run of the game on an RBI single to left field.

While Lumpkin continued to hold the Titans hitless, SCHS got two more runs in the bottom of the sixth. Taylor was able to score on a passed ball and Clark drove in the final run of the game on a sacrifice fly.

Throughout both games, the Wildcats were extremely aggressive on the base paths and stole a total of 13 bases in the two-game series. “I loved how we ran the bases tonight. We took a bunch of bags. We were aggressive on balls in the dirt,” Cheek said.

In total, the Wildcats scored seven runs on eight hits in Game 1 and took advantage of three errors committed by the Titans. 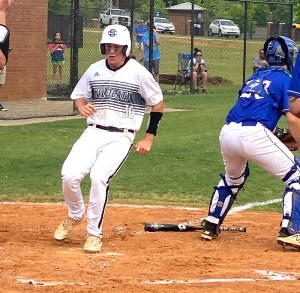 Schley County left fielder Tucker Welch scores the Wildcats’ fifth run of the game on a two-RBI single by Jack Clark in Game 1. SCHS went on to win that game 7-0.
Photo by Ken Gustafson

In Game 2, the Wildcats, who were the visiting team, scored three runs in the top of the first on two hits. Lumpkin drove in a run on an RBI single and Lamb doubled to left field. Both Tucker Welch and Athon Hines were able to drive in the next two runs on fielder’s choices.

However, the Titans were able to get back in the game in the bottom of the first by scoring two runs on two SCHS errors. However, those two runs would be the only runs scored by the Titans in Game 2. “We make two errors in the first, which is uncharacteristic of those guys,” Cheek said. “They’re young. It’s their first time being in the playoffs as a freshman, but they settled down. They both made some good plays after that and we were able to put some runs on the board.”

The Wildcats scored two runs in the second and three in the third to take an 8-2 lead, but there was more to come. In the top of the fourth, Taylor sent another message right off his bat by belting his second home run of the day. It was the first of five more runs scored by the Wildcats in the inning.

SCHS would later finish off the Titans by scoring four more runs in the top of the fifth on two hits, five walks and a hit batsman. 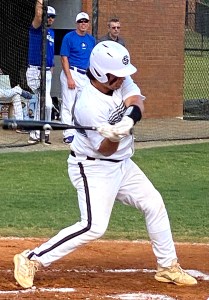 Schley County first baseman Jack Clark had a total of five hits out of seven at bats, drove in four RBIs and scored a total of three runs in the two-game playoff series against Lake Oconee Academy. The Wildcats won Game 1 by the score of 7-0 and won Game two by the score of 16-2.
Photo by Ken Gustafson

The Wildcats also got production from Luke Renfroe, who went 2 for 2 with a double, a single, an RBI and two runs scored. In total, the Wildcats were able to score 16 runs on 11 hits and they took advantage of nine walks issued by LOA pitchers.

Taylor got the start on the mound in Game 2 for SCHS. In a little over two innings of work, he gave up two runs on one hit, walked three and struck out four LOA batters.