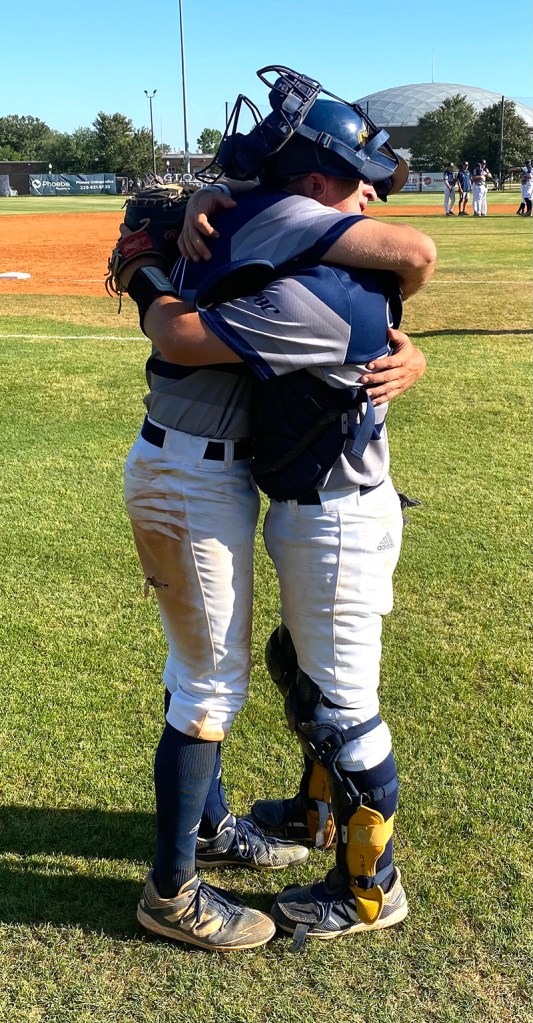 GSW seniors Jonathan Martin and Jacob Harrell embrace each other after the conclusion of Game 2 of a doubleheader between GSW and the Saints of Flagler College. The Hurricanes lost Game 1 by the score of 4-2, but won the second game 1-0. Photo by Ken Gustafson

AMERICUS – The Georgia Southwestern State University Baseball Team (GSW) concluded its season on Saturday, May 1 by splitting a doubleheader with Flagler College (FC) on Senior Day at GSW. In Game 1, the Saints defeated the Hurricanes 4-2, but GSW was able to end the 2021 season on a positive note by winning the second game 1-0 thanks to the strong pitching performance by redshirt freshman Aaron Wainright, who was able to get the win and finish the season with a pitching record of 4-4.

In Game 2, GSW senior relief pitcher Cole Garrett struck out the final two FC batters he faced in the bottom of the ninth inning to earn his sixth save of the year, putting a fitting end to his career and that of the other four Hurricane seniors. 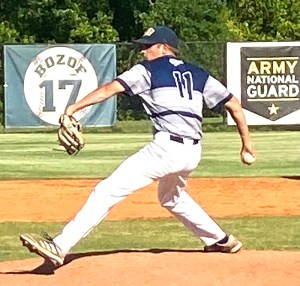 GSW senior relief pitcher Cole Garrett struck out the final two batters he faced to secure a 1-0 win for the Hurricanes over Flagler College in his final game as a Hurricane.
Photo by Ken Gustafson

For Garrett, Tucker Smith, Jonathan Martin, Jeffrey Omohundro and Jacob Harrell, Game 2 of this doubleheader against FC was their final game in a Hurricane uniform. Being that the Hurricanes did not finish the regular season amongst the top four teams in the Peach Belt Conference (PBC), they will not be eligible to compete in this year’s PBC Tournament and will conclude their season with an overall record of 19-21 and a PBC record of 16-17. Those 16 PBC wins are a new school record for the GSW baseball program, breaking the previous record of 14 PBC wins set in 2019.

The Saints, who have also been eliminated from post-season competition, finish their season with an overall record of 17-21 and a PBC record of 16-16.

“If you look at our goals for the year, we didn’t meet the expectations that were set in place,” GSW Head Coach Josh McDonald said. “But this senior group will always be special because they helped change the direction of this program. Obviously, they have written their story by setting the school record for Peach Belt wins, breaking the won that they set in 2019. They’ll be a big part of this. Like I told the guys last night (Friday night), there will be guys in this group that will win a championship and these guys that are leaving us after this year, they’ll be a big part of that and they’ll be the first guys that I call. Again, hats off to the guys and I appreciate everything that they have given to this program,” McDonald continued. 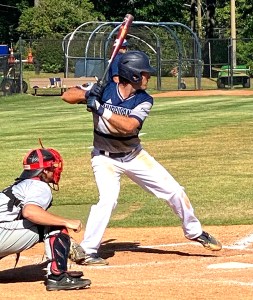 GSW senior shortstop Jeffrey Omohundro bats in his final game as a Hurricane. For the doubleheader, Omohundro went 0 for 6 with a sacrifice fly RBI in Game 1.
Photo by Ken Gustafson

In Game 1, GSW starting pitcher Jared Donalson pitched five innings of scoreless baseball before the Saints took a 2-0 lead in the top of the sixth inning. With a runner at second base and one out, FC centerfielder Jake Kaufman drove in the first run of the game on an RBI single to right field. After Donovan Garcia grounded into a fielder’s choice, moving Kaufman to second, Adam Mitchell drove in Kaufman on an RBI single to give FC the 2-0 lead.

The Saints took a 3-0 lead in the top of the seventh on a solo home run by Ashton Thomas, but the Hurricanes responded with a run in their half of the inning when Jeffrey Omohundro drove in Gregory Wozniak on a sacrifice fly. 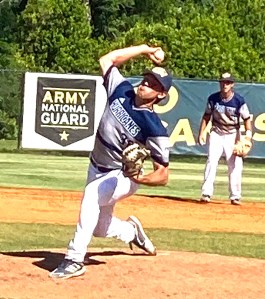 GSW R-Freshman pitcher Aaron Wainright pitched seven innings of scoreless baseball to lead the Hurricanes to a 1-0 victory over Flagler in their final game of the 2021 season.
Photo by Ken Gustafson

Both teams added another run in the eighth, but with two outs in the bottom of the ninth, the Hurricanes made a last-ditch effort to tie or win the game. Hunter Foster came up with a two-out single, bringing the tying run to the plate in the name of Reid Ragsdale. However, Ragsdale grounded into a fielder’s choice to end the game.

The Hurricanes had a total of seven hits in Game 1, but with the exception of scoring runs in the sixth and eighth innings, they weren’t able to get the timely hitting to score more runs. Wozniak went 1 for 3 for GSW with an RBI single and a run scored and Omohundro drove in another run on a sacrifice fly. 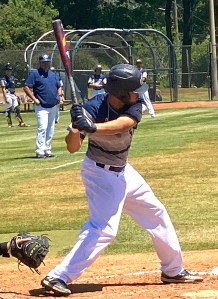 GSW right fielder Hunter Foster drove in Matthew Mamatas on an RBI double in the bottom of the fifth inning to lead the Hurricanes to a 1-0 victory over Flagler College in Game 2 of a doubleheader.
Photo by Ken Gustafson

FC starting pitcher Colt Mink got the win for the Saints in Game 1 and finished his season with a record of 5-5. In a little over seven innings of work, Mink gave up two runs on six hits, walked four and struck out five GSW batters. Gage Voorhees came on in relief of Mink and got the save. In a little over an inning of work, he gave up no runs on one hit and struck out two.

Donalson took the loss for GSW and finishes his season at 4-3. In seven innings of work, Donalson gave up three runs on four hits, including the solo home run by Thomas in the seventh. He walked two batters and struck out three. Brooks McDonel came on in relief of Donalson. In two innings of work, he game up one run on one hit and struck out one batter.

: GSW third baseman Miles Hartsfield makes a diving effort on a ball that was scorched into left field.
Photo by Ken Gustafson

Game 2 of the doubleheader was simply a pitchers’ dual for 7.5 innings. GSW starting pitcher Aaron Wainright pitched seven scoreless innings to get the win for the Hurricanes, finishing his season with a record of 4-4. He gave up five hits, walked one batter and struck out three. Nick McCollum came on in relief of Wainright. In one inning of work, he gave up no runs or hits, walked one batter and struck out another.

In the bottom of the fifth inning, the Hurricanes scored the game’s only run when Hunter Foster drove in Matthew Mamatas on an RBI double to left centerfield. 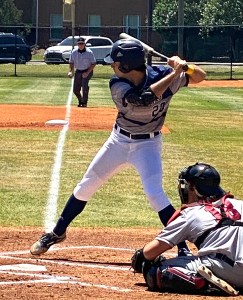 GSW senior centerfielder Jonathan Martin closed out his stellar college career on Saturday by going 2 for 6 with a run scored in the doubleheader against Flagler.
Photo by Ken Gustafson

GSW was able to hold the Saints scoreless for the remainder of the game and in the bottom of the ninth, GSW senior pitcher Cole Garrett struck out the final two FC hitters he faced to earn his sixth save of the year and to secure a 1-0 win for the Hurricanes in their final game of the 2021 season.

GSW had a total of four hits in Game 2. Mamatas, Wozniak, Foster and Miles Hartsfield each had one hit in the ball game, with Foster driving in the winning run in the fifth.