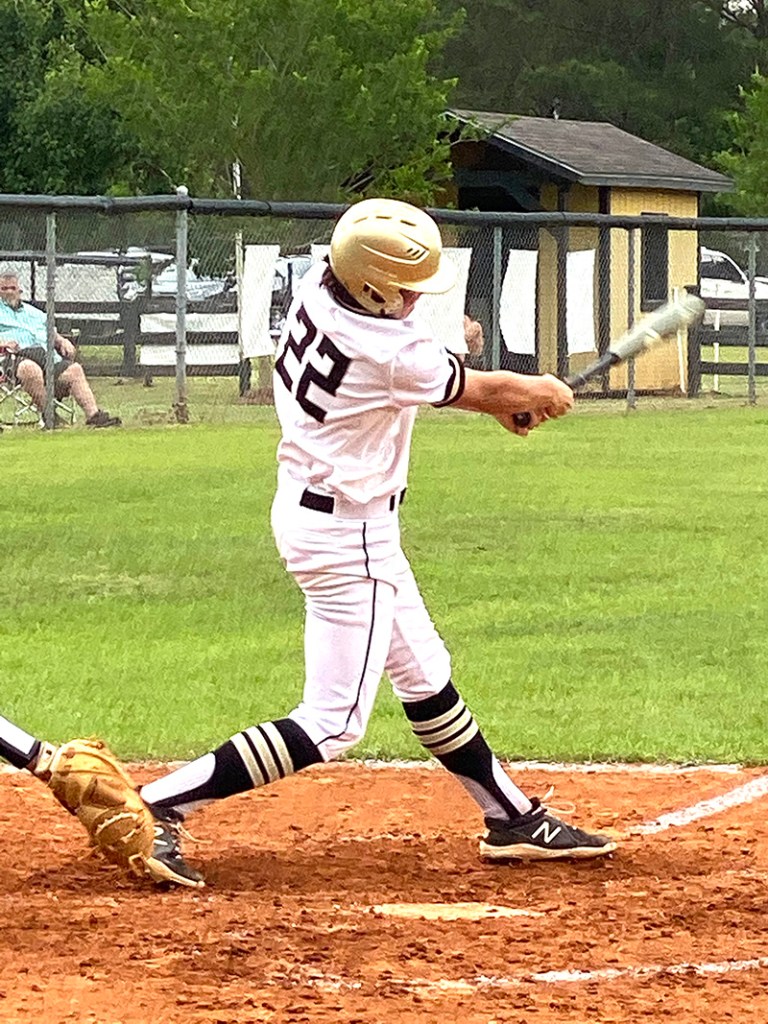 In the two playoff games against CCA, Southland Academy freshman Perry Usher went 6 for 6 at the plate with four RBIs and four runs scored to help lead the Raiders past the Cougars 18-0 and 13-2 in the first round of the GISA Class AAA State Playoffs. Photo by Ken Gustafson

AMERICUS – Whatever amount of offensive firepower the Raiders had been holding back during the regular season, they unleashed just about all of it on the Cougars of Creekside Christian Academy (CCA). On Monday, May 3, the Southland Academy Baseball Team (SAR) swept CCA 18-0 and 13-2 in the first round of the Georgia Independent School Association (GISA) Class AAA State Playoffs at Raider Field.

With the two-game sweep of the Cougars behind them, the Raiders (12-11) will advance to the second round of the state playoffs to play Pinewood Christian School (PCS) in Bellville, GA on Friday and Saturday, May 7-8. The PCS Patriots (19-7) defeated Frederica Academy in two games by scores of 13-0 and 9-2 in the first round on Monday and will host the Raiders at PCS in Bellville. 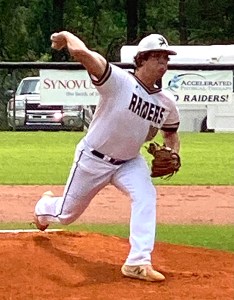 Southland Academy sophomore Chase Ledger struck out five batters to help lead the Raiders to an 18-0 shellacking of CCA in Game 1 of the first round of the state playoffs.
Photo by Ken Gustafson

In Game 1 of the series against CCA, the Raiders wasted no time in taking control early. They scored four runs on two hits in the bottom of the first inning and took advantage of four walks and a hit batsman. However, the Raiders’ onslaught really ramped up in the second inning, as they scored 14 runs on 11 hits to put Game 1 totally out of reach. Owen Exley had a triple and a single in the inning and drove in two RBIs. Every other Raider in the lineup batted twice in the second inning, and with the exception of Nathan Duke, every other batter in the lineup had at least one hit in the inning. In addition to Exley’s two hits in the second inning, both Perry Usher and Buddy Brady each had two hits, with Brady driving in two RBIs. Both Will Godwin and Henry Johnson each doubled in the inning and drove in a combined four RBIs.

Chase Ledger started on the mound for the Raiders in Game 1 and had another dominant performance. Ledger gave up only one hit and struck out five CCA batters. 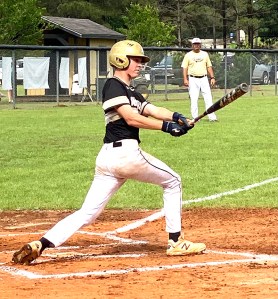 Southland Academy sophomore Henry Johnson went 1 for 3 with a single in Game 2 and scored two runs.
Photo by Ken Gustafson

Once Game 1 concluded, Game 2, which was supposed to start at 3:30 p.m., was delayed due to heavy rain, but the second game was able to get underway around 5 p.m. Early on, Game 2 was more competitive, as the Cougars had a 2-1 lead after one inning of play. However, in the top of the fourth, the Raiders, who were the visiting team in Game 2, struck for two runs on two hits and took advantage of an error to take a 3-2 lead. From then on out, SAR would take total control of Game 2.

In the top of the fifth inning, Johnson and Exley were able to draw walks before Ledger struck out for the first out of the inning. However, Perry Usher drove in two runs on an RBI single to give the Raiders a 5-2 lead. James Griffin reached first base after getting hit by a pitch and Buddy Brady followed that up with a two-run double to give SAR a 7-2 lead. Will Godwin continued the hit parade with an RBI single to extend the Raiders’ lead to 8-2. 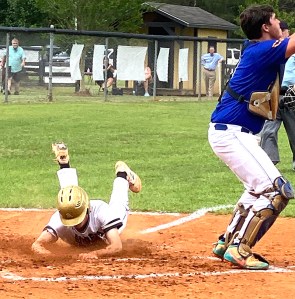 Then in the top of the sixth, the Raiders put Game 2 out of reach by scoring five more runs on five hits and took advantage of two hit batsman. Both Usher and Griffin each belted two-run doubles in this inning and Brady drove in another run on an RBI single to seal the 13-2 victory for SAR and a trip to Bellville to face PCS in the second round. 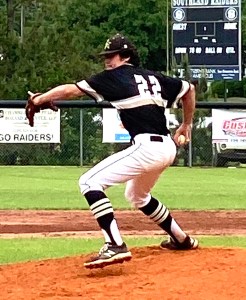 Southland Academy freshman Perry Usher struck out six CCA batters to help lead the Raiders to a 13-2 victory over the Cougars in Game 2.
Photo by Ken Gustafson

Usher was tremendous at the plate for the Raiders in Game 2. He went 4 for 4 with two doubles, two singles and drove in a total of four RBIs. Brady was also perfect at the plate, as he went 3 for 3 with a single, a double and three RBIs. In total, the Raiders scored 13 runs on 12 hits and committed one error, while the Cougars scored two runs on six hits and committed four errors in Game 2.

Usher went the distance on the hill for SAR in Game 2. He gave up two runs on six hits, walked one and struck out six CCA batters. 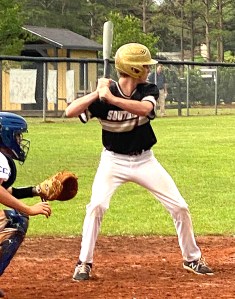 Southland Academy freshman Trey Sellers is at the plate for the Raiders in Game 2.
Photo by Ken Gustafson

With the win, the Raiders improve to 12-11 on the season, while the Cougars conclude their season with a record of 13-11.

The Raiders will now turn their attention to the Patriots of PCS, whom they will face this Friday and Saturday in Bellville, GA. The start time for Game 1 on Friday has yet to be determined.