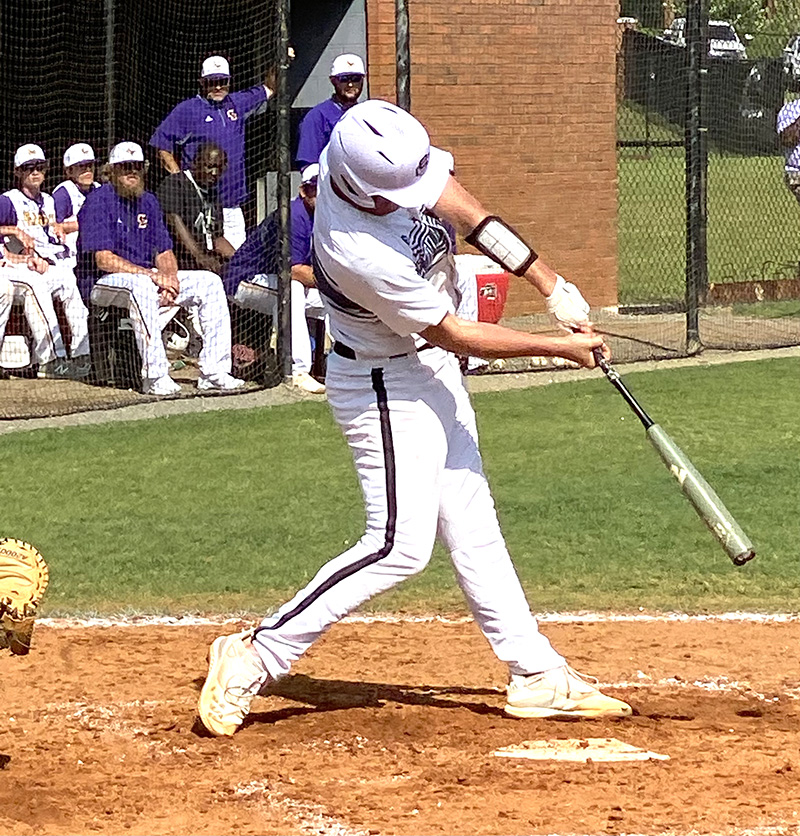 Schley County designated hitter Tyler Cheek had a crucial single in Game 1 that would eventually lead to six runs scored in the third inning for the Wildcats. SCHS went on to defeat Crawford County 8-2 in Game 1. Cheek went 3 for 3 in that game and drove in two RBIs. Photo by Ken Gustafson

ELLAVILLE – During the first two innings of Game 1 of the GHSA Class A-Public State Baseball Playoff series between Schley County and Crawford County (CC) on Tuesday, May 4, it looked as if the Wildcats were going to struggle to win a game in this series. The Eagles had taken a 2-0 lead in the top of the first and SCHS was struggling to get runners on base. However, everything changed in the bottom of the third inning. Thanks to some timely hitting, coupled with a couple of errors by the Eagles, the Wildcats scored six runs in the inning to take a 6-2 lead. That inning would change the momentum of the game, as the Wildcats (22-8) won the first game 8-2 at Wildcat Park. However, the direction of the series changed in Game 2, as the Eagles scored six runs in the fourth to take a 9-3 lead. The Wildcats fought back in the fifth by scoring four runs to get back in the game, but just as SCHS was preparing to finish a dramatic come-from-behind victory, a severe thunderstorm came through the area, stopping play in the bottom of sixth. According to GHSA rules, if the home team has the lead after four innings of play when bad weather stops play, that team is declared the winner. As a result, Crawford County, who was the home team in Game 2, was declared the winner by the score of 9-7. 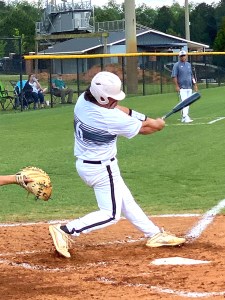 Schley County’s Jack Clark homered in Game 1 of the second round of the state playoffs to lead the Wildcats to an 8-2 victory over Crawford County.
Photo by Ken Gustafson

However, things would change quickly in the bottom of the third and would lead to a momentum shift in Game 1. Tyler Cheek led off the frame with a single and Carson Westbrook was able to draw a walk off CC starting pitcher Caleb Carr. SCHS courtesy runner Owen Shufflebarger was thrown out trying to steal third, but Dylan Taylor Drew a walk to put runners at first and second for the Wildcats with one out. Trypp Lumpkin then drove in the Wildcats’ first run of the game on an RBI single.

However, that was just the beginning of a six-run explosion by SCHS. Taylor would later score on a passed ball to tie the game and Owen Lamb drove in Luke

Pawlowski on a fielder’s choice to give the Wildcats a 3-2 lead. Tucker Welch then reached on an error and Athon Hines followed that up with an RBI single.  Later on in the inning, Cheek struck again with a two-run single and the Wildcats enjoyed a 6-2 lead.

In the bottom of the fifth, the Wildcats added two more insurance runs on a solo home run by Jack Clark and a sacrifice fly by Taylor.

Cheek led the Wildcats’ charge by going 3 for 3 at the plate with three singles and two RBIs. Jack Clark went 1 for 2 with a home run and scored two runs, while both Lumpkin and Hines each had one hit and drove in an RBI. Lumpkin also scored a run in Game 1. 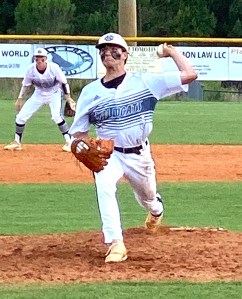 Schley County starting pitcher Trypp Lumpkin had seven strikeouts in the Wildcats’ 8-2 victory in Game 1 of the second round of the GHSA Class A-Public State Playoffs.
Photo by Ken Gustafson

As the visiting team in Game 2, the Wildcats quickly jumped out to a 1-0 lead in the top of the first when Lumpkin drove in Pawlowski on an RBI single. SCHS added another run in the top of the second on an RBI single by Taylor, but the Eagles struck back with three runs of their own to take a 3-2 lead. Trevor West tied the game at 2-2 on an RBI single and CC was able to take the lead when Blake Bishop bunted into a fielder’s choice, scoring Trace Hodges from third.

However, the game pivoted in the favor of the Eagles for good in the bottom of the fourth. They scored six runs on four hits and took advantage of an error and a hit batsman.

The Wildcats, however, would not go away. With one out in the top of the sixth, Lumpkin began the Wildcats’ comeback bid with a single. Owen Lamb grounded into a fielder’s choice for the second out, but Tucker Welch was able to keep the inning alive with a single and Athon Hines drew a walk to load the bases for Jack Clark. Clark then reached on an error, allowing Lamb to score. After Clark stole second base, Luke Renfroe was able to draw a walk to load the bases once again.

Tyler Cheek then drew a walk and drove in an RBI to bring the Wildcats to within three at 9-6. With the bases still loaded and two outs, Carson Westbrook was hit by a pitch, resulting in another run for the Wildcats. Unfortunately for SCHS, Dylan Taylor popped out to end the inning.

Welch led the Wildcats’ offense by going 2 for 3 in Game 2 with two runs scored and both Taylor and Lumpkin went 2 for 4 with an RBI. Taylor, Ridge James and Hines all pitched for SCHS in Game 2 and combined to give up nine runs on nine hits. They combined to walk a total of five batters and had five strikeouts.

Both teams will square off in the deciding Game 3 at Wildcat Park on Wednesday, May 5 at 5:30 p.m.