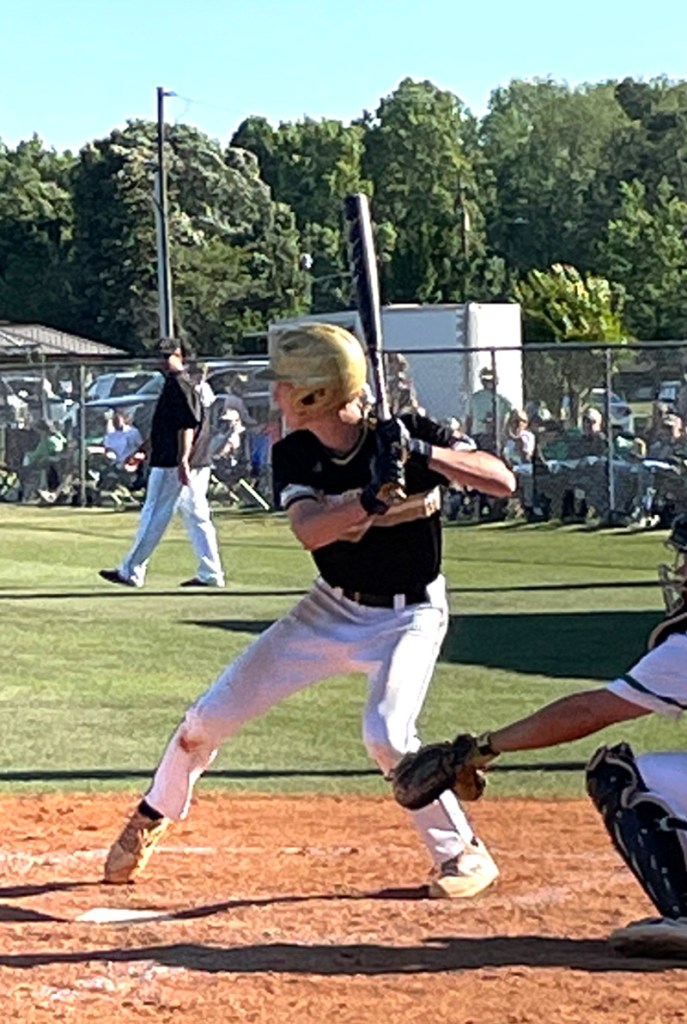 Southland Academy’s Henry Johnson went a combined 5 for 8 at the plate in the two-game series against Pinewood Christian and scored a run in Game 1. Photo by Chad Ledger

BELLVILLE, GA – The Southland Academy Baseball Team (SAR) made the 160-mile journey to Bellville, GA on Friday, May 8 with hopes of toppling the Patriots of Pinewood Christian Academy (PCA) in the second round of the GISA Class AAA State Playoffs. However, the Raiders fell short in both games, losing to PCA 9-4 in Game 1 and falling again to the Patriots 5-4 in Game 2 to end the 2021 season.

For four seniors: Nathan Duke, Owen Exley, Max Foster and James Griffin, Friday’s doubleheader would be the last time they will ever don the white, black and gold for Southland Academy, but their accomplishments and their contributions to the SAR program will never be forgotten.

“I’d like to thank our four seniors for their leadership,” SAR Head Baseball Coach John Brady said. “These are fine young men that are going to do great things in life. I’m not sure that I have ever been more proud of a team in my 14 years of doing this. We only had two guys returning with any experience from last season, but we were able to play good baseball most of the season and are in the right to host playoff games and advance through the first round of the playoffs.”

With the loss to PCA, the Raiders finish their season at 12-13, while the Patriots improve to 21-7 on the year and will advance to the GISA Class AAA State Semifinals, where they will meet either Westfield or John Milledge Academy.

In Game 1, the teams were tied 2-2 going into the bottom of the second inning, but the Patriots scored four runs on two hits, including a three-run home run by Parker Deal, to take a 6-2 lead. 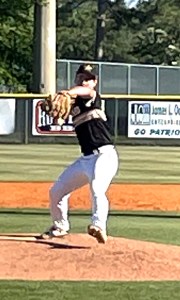 Southland Academy’s James Griffin came on in relief of Chase Ledger in Game 1. Griffin gave up one run on three hits and one inning of work.
Photo by Chad Ledger

However, the Patriots countered with two more runs in the bottom half of the inning. Gabe Edwards led off the frame with a double to right field. SAR starting pitcher Chase Ledger struck out Walt Durrence for the first out, but Evan Belding singled to centerfield and advanced to second on the throw back into the infield. Grayson Swindell would later drive in two runs on an RBI single to give the Patriots an 8-4 lead.

The Raiders’ march towards a comeback started off well in the top of the sixth when Henry Johnson led off the inning with a double. However, PCA starting pitcher Jax Lewis was able to strike out Exley, Ledger and Usher to end the threat.

The Patriots got another insurance run in the bottom of the sixth when Belding drove in Edwards on an RBI single. The Raiders tried to make a last-ditch effort to save themselves in the top of the seventh, but Lewis retired Griffin, Brady and Will Godwin in order to seal the 9-4 victory for the Patriots in Game 1.

Ledger started on the mound for the Raiders and had mixed results. In five innings of work, he gave up eight runs on nine hits, walked one batter and struck out six. James Griffin came on in relief of Ledger. In one inning of work, Griffin gave up one run on three hits.

Having lost Game 1 to PCA, the Raiders had their backs to the wall and were facing season-ending elimination from the state playoffs. Their hopes to force a deciding Game 3 rode on Game 2 starter Perry Usher and, of course, the Raider offense.

The Patriots, who were the visiting team in Game 2, scored the first two runs of the game in the top of the first. With a runner on first and one out, Garrett Bland singled to left field. Then with runners at second and third, Edwards drove in the first run of the game on a sacrifice fly. Durrence then followed that up with an RBI double to give PCA a 2-0 lead. 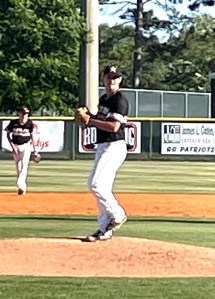 Southland Academy pitcher Chase Ledger started on the mound for the Raiders in Game 1. He gave up eight runs on nine hits, but struck out six PCA batters.
Photo by Chad Ledger

The Raiders fought back in the bottom of the first when Ledger drove in Exley on a two-out double, but the Patriots countered with another pivotal multi-run inning in the top of the third. They were able to score three runs on four hits and were benefited by a catcher’s interference call against SAR catcher Will Godwin.

However, the Raiders didn’t quit. In the bottom of the fifth, they crept a run closer when Henry Johnson doubled with two outs and Exley drove in Max Foster on an RBI single. Then in the bottom of the sixth, the Raiders brought themselves to within one run of tying the game by scoring two runs on two hits and taking advantage of an error. Going into the bottom of the seventh, SAR only needed a run to tie and two to win with the top of the order coming up.

However, PCA pitcher Garrett Bland retired Duke, Johnson and Exley to end the game and the Raiders’ season.

Johnson and Exley both went 2 for 4 in Game 2, while Johnson also drove in a run and scored another. Will Godwin went 1 for 3 with two RBIs and the Raiders got hits from Ledger, Usher, Brady and Griffin. In total, SAR tallied nine hits in Game 2, but could not generate enough runs.

Usher pitched all seven innings of Game 2 and gave up five runs on nine hits. He had no walks in the game and struck out five PCA batters.

“These guys overcame a lot of adversity and just continued to improve each and every week,” Coach Brady said. “They demonstrated the toughness and family-type togetherness that we have tried to instill in our program. We have a great nucleus returning and I am looking forward to great things in the future.”