Schley County’s Perri DeVane won the Girls Pole Vault competition at the Class A-Public Sectional Meet in Camilla and is headed to the state meet in Albany. DeVane cleared the bar at a height of 8-06.00. Photo by Sheila DeVane

CAMILLA, GA – Both the Schley County Wildcat and Lady Wildcat track and field teams went down to Camilla on Saturday, May 8 and emerged as sectional champions at the GHSA Class A-Public Sectional Meet at Mitchell County High School. The Wildcats finished a top the standings with 109 points and finished 54 points ahead of meet runners-up Metter. On the girls’ side, the Lady Wildcats won the sectional meet with 71 points and finished 13 points ahead of the Lady Tigers of Metter, who were the meet runners-up.

The top eight finishers in each event will move on to the GHSA Class A-Public State Meet in Albany this coming weekend and both the Wildcats and Lady Wildcats will be well represented. In almost every event, both the SCHS girls’ and boys’ squads had athletes that finished in the top eight and qualified for State.

In the Girls Discus event, the Lady Wildcats had a champion, a third-place finisher and a fifth-place finisher. Rene Rix won the Discus event by making a distance throw of 106-06 (106 feet, six inches) and her teammates, Berkley Goodin and Sarah Barnhill, finished in third and fifth place respectively. Goodin clinched the third spot with a throw of 98-00 and Barnhill clinched the fifth spot with a throw of 85-02.

In the Boys Discus event, Sidney Blackwell was able to secure eighth place and a spot in next weekend’s state meet with a distance throw of 109-00.

In the Girls Long Jump, Schley County’s Dasani Minter, who recently signed a track scholarship to compete for the University of West Georgia, finished in fourth place as she was able to clear the bar at a height of 15-04.50. Minter also claimed a spot in the state meet in the Girls Triple Jump, finishing in third place with a jump of 32-05.00. In the Girls 100 Meter Dash, Minter clinched another spot in the state meet for the Lady Wildcats as she finished in fifth place in a time of 13.02. Minter qualified for State in one other event as well: the Girls 200 Meter Dash. She finished as the runner-up in that event in a time of 27.06. 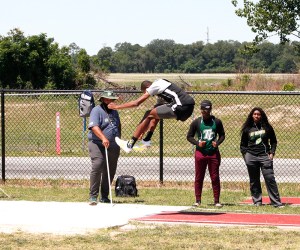 Schley County’s Clinton Jackson qualified for State in several events at the sectional meet, including the Boys Long Jump event. Jackson finished in fourth place in the event with a distance jump of 20-11.00.
Photo by Sheila DeVane

In the Boys Long Jump event, Clinton Jackson finished in fourth place by jumping a distance of 20-11.00. Jackson also qualified for the state meet in the 300 Meter Hurdles, finishing as the runner-up in a time of 43.03.

In the Girls Pole Vault event, Perri DeVane once again showed why she is one of the best in the state in the Class A-Public division. DeVane won the event by clearing the bar at a height of 8-06.00. In the Boys Pole Vault competition, the Wildcats swept the top three spots, with Levi Johnson winning the event by vaulting a height of 12-00.00 (12 feet). Logan Elliot finished in second place by clearing the bar at 10-06.00 and Matthew Nguyen finished in third by clearing a height of 8-06.00. 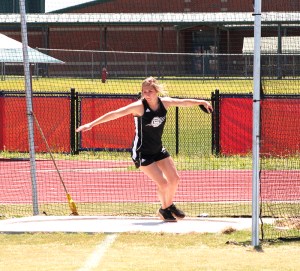 Schley County’s Berkley Goodin qualified for the state meet in the Discus event by finishing in third place with a distance throw of 98-00 (98 feet).
Photo by Sheila DeVane

The Lady Wildcats’ 4×800 Meter Relay team secured its spot in the state meet by finishing as the runners-up in the event. The team of Hannah Scoggins, Anthony Maelyn, Cheyenne Hardison and Mary Deloach finished in second place with a time of 14:15.87. In the Boys 4×800 event, the Wildcats were able to take home the crown, winning the event in a time of 9:02.89. That team was made up of Eli Bacon, John Lightner, David Williams and Aaron Pinckard.

While both the Schley County teams won their respective sectional meets, they were not the only local student-athletes to nail down berths in next weekend’s state meet in Albany. Furlow Charter’s Maya Wynn continued her great work as one of the finest female milers in the state. Wynn once again won the Girls 1600 Meter Run, finishing in a time of 6:00.66. Wynn also qualified for state in the 800 Meter Run, winning the event in a time of 13:10.53. Hannah Scoggins of SCHS very nearly qualified for state in that same event, finishing in ninth place in a time of 15:56.91. 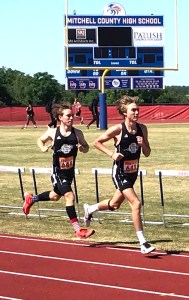 Schley County seniors David Williams (front) and Aaron Pinckard (behind) both qualified for the GHSA Class A-Public State Meet in both the Boys 1600 Meter Run and the 800 Meter Run. Pinckard also won the 3200 Meter event, finishing in a time of 11:45.24.
Photo by Sheila DeVane

On the boys’ side, Edwin Gonzalez earned Furlow another spot in the state meet by finishing in fifth place in the Boys 1600 Meter Run. Gonzalez crossed the finish line in a time of 5:09.42 and finished just three seconds shy of fourth-place finisher Luke Daniels of Pataula Charter (5:06.29).

Schley County senior Dasani Minter competes in the Girls Triple Jump at the sectional meet. Minter finished in third place in the event and qualified for the state meet in other events as well.
Photo by Sheila DeVane

Clinton Jackson, who secured a spot in State in the Long Jump, won the Boys 110 Meter Hurdles, finishing in a time of 16.29. Jackson’s teammate, Matthew Nguyen, finished the event just two spots out of the top eight in a time of 20.35.

The GHSA Class A-Public State Championships will be held Thursday through Saturday, May 13-15 at Hugh Mills Stadium in Albany.