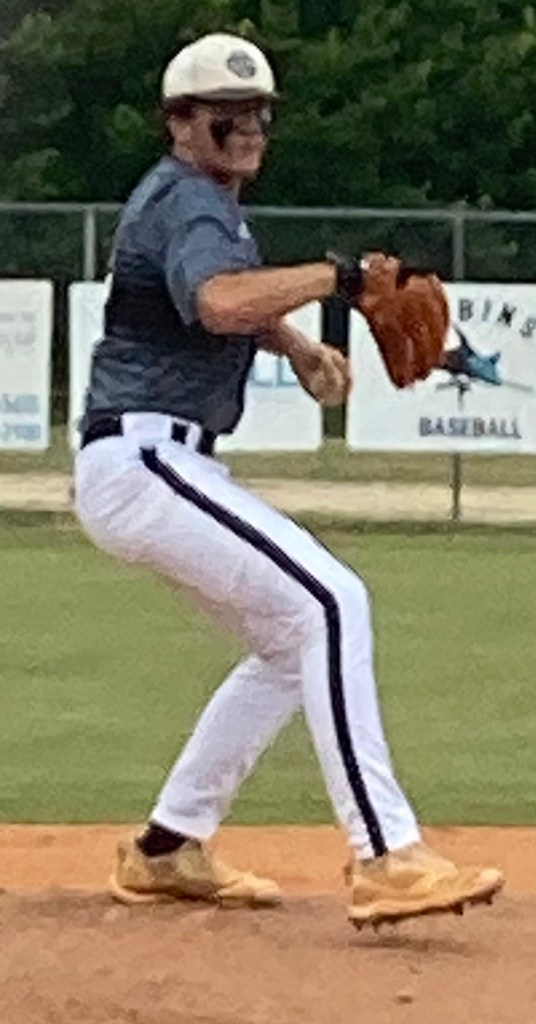 Schley County pitcher Trypp Lumpkin struck out 10 batters in six innings of work in the Wildcats’ 2-1 loss to Metter in Game 1 of the state quarterfinals. Photo by Ken Gustafson

METTER, GA – After defeating Crawford County to advance to the quarterfinals of the GHSA Class A-Public State Playoffs, the Schley County High School Baseball Team (SCHS) made the 150-mile journey to Metter, GA on Monday, May 10 to engage in an Elite 8 catfight with the Metter Tigers (MHS). However, due in large part to the dominating pitching performances of MHS starting pitchers John Luke Glanton and Brian Crooms, the Wildcats’ dreams of making it back to the state championship finals in Savannah were dashed as the Tigers defeated SCHS 2-1 and 6-0 to end the Wildcats’ season.

“Tough day.  Really tough to watch these seniors play their last game.  It’s even tougher when it’s one of your own,” SCHS Head Coach Chuck Cheek said.  “Metter had two great pitchers who could really throw it.  They were both sitting upper 80s and touching 90. I thought we had some good at bats and we had several chances to score. We just couldn’t get the big hit.”

SCHS finishes the 2021 season with a record of 23-10, while the Tigers (25-8) move on to the Class A-Public State Semifinals, where they will either play Commerce or Charlton County.

Game 1 was a pitchers’ dual between SCHS starter Trypp Lumpkin and MHS starter John Luke Glanton, but at this level of play and at this time of the year, walks and errors are magnified. Unfortunately for the Wildcats, a walk and a throwing error in the first inning proved costly and led to the Tigers’ two runs. 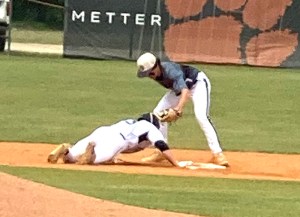 Glanton showed his dominance early in the top of the first by striking out Dylan Taylor, Lumpkin and Owen Lamb. Then in the bottom half of the inning, Lumpkin walked the MHS leadoff hitter Glanton and hit Rustin Rigdon to put runners on first and second for the Tigers. Lumpkin was able to strike out R.J. Coney for the first out, but Glanton, who stole third base as part of a double steal by the Tigers, scored on a throwing error. Kyzer Anthony then drove in the Tigers’ second run on an RBI single to give MHS all the run support it needed.

SCHS responded in the top of the third as Ridge James drew a leadoff walk and would later score on a fielder’s choice by Dylan Taylor. However, that run would be the only run of the game scored by SCHS.

The Wildcats were able to get runners on base in the innings to follow, but couldn’t get the clutch hitting to score runs. In the top of the seventh, SCHS had runners at first and second with one out, but Glanton was able to get Ridge James to ground into a double play to end the game. 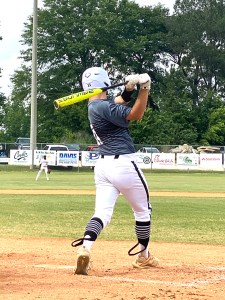 Schley County shortstop Dylan Taylor went a combined 2 for 6 at the plate in the two-game playoff series against Metter.
Photo by Ken Gustafson

Lumpkin pitched brilliantly for the Wildcats in Game 1. In six innings of work, the junior struck out 10 MHS batters, while giving up only two runs on three hits. Unfortunately for SCHS, Glanton gave up one less run on two hits and struck out nine.

“Trypp was really good again on the mound. To be honest, that game should have been 0-0 going to extras,” said Cheek. “We gift wrapped their two runs in the first and they gave us one back later.  In Game 2, the same kind of thing happened and we got ourselves down in a hole.  We had chances to come up off the deck, but it didn’t seem like we could get that hit when we needed it.” 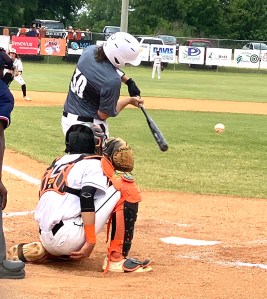 Tucker Welch is seen here at the plate for the Wildcats.
Photo by Ken Gustafson

Having lost Game 1, the Wildcats found themselves on the brink of elimination and were hoping to rebound with a win in Game 2 to force a third and deciding Game 3. However, the Tigers got another dominating pitching performance, this time from Brian Crooms. In this game, SCHS had its chances, as the Wildcats were able to get runners on base. However, once again, they were unable to get the needed clutch hitting and fell in Game 2 to the Tigers 6-0 to end their season.

Owen Lamb, who was the Game 2 starter for the Wildcats, struggled in the first inning. He walked four batters and allowed two runs before he was replaced by reliever Ridge James.

SCHS tried to respond in their half of the first inning. Dylan Taylor drew a leadoff walk off Crooms and Trypp Lumpkin singled to put runners at first and second. However, Crooms struck out the next three batters he faced to end the Wildcats’ threat. 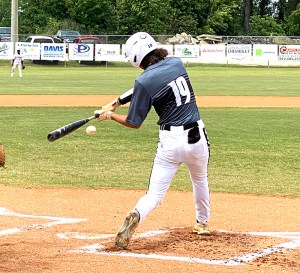 Schley County pitcher/right fielder Owen Lamb went 1 for 2 at the plate with a single in Game 2 against Metter.
Photo by Ken Gustafson

Throughout Game 2, the Wildcats had their chances to score runs, but stranded eight base runners. The Wildcats were the home team in Game 2 and their next best chance for runs came in the bottom of the fourth inning. With one out, Luke Renfroe was hit by a pitch from Crooms and Tyler Cheek reached on an error that allowed him to advance to second and Renfroe to advance to third. However, Crooms shut the door on SCHS again by striking out Ridge James and Carson Westbrook to end the Wildcats’ chance.

While the Wildcats were struggling to score a run, the Tigers got two runs in the fourth, one in the sixth and another in the seventh to secure their 6-0 win and a berth in the state semifinals.

“We had some really good at bats, battled those guys and tried to get their pitch counts up.  It seemed like every time their pitcher got in a little trouble, he’d find an extra gear to get out of it,” said Cheek.

Like Glanton in Game 1, Crooms had a dominating performance on the mound for MHS in Game 2. He pitched a little over six scoreless innings, giving up four hits and striking out 11, while walking two.

The Wildcats used four pitchers in Game 2. Of the four SCHS pitchers used, Dylan Taylor had the best performance. In a little over two innings of work, he gave up one run, walked one batter and struck out four.

In spite of the season-ending loss, Coach Cheek has enjoyed immensely watching the growth of his players over the last several years.

“I’ve watched these guys play since they were three and four years old,” said Cheek.  “They are a great group of young men and I look forward to seeing all of the great things they accomplish.”