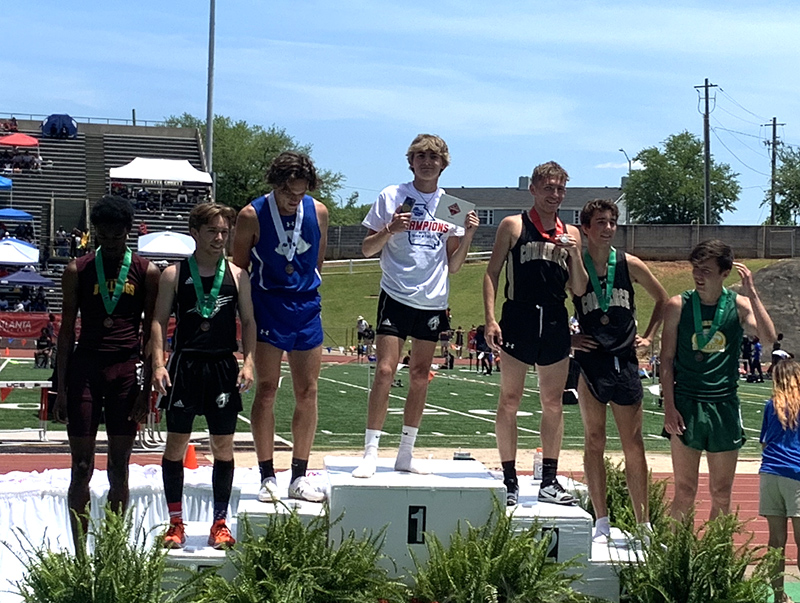 Schley County senior David Williams stands atop the podium after winning the state title in the Boys 800 Meter Run, the last race of his high school career. Photo by Scott Burgess

ALBANY – For Schley County senior distance runner David Williams and his Wildcat teammates, the results of the 2021 GHSA Track and Field State Meet on Saturday, May 15 turned out to be the culmination of not only a season of hard work and perseverance, but also the culmination of four years of dedication and pains-taking discipline. Williams realized his four-year dream of becoming a state champion by winning the 800 Meter Run and as a result, led the Wildcats to a tie for third place with Washington-Wilkes (WW) with 46 points in the final GHSA Class A-Public standings at Hugh Mills Stadium in Albany.

Schley County seniors and best friends David Williams and Aaron Pinckard embrace after the finals of the A-Public Boys 800 Meter Run. Williams won the state title in the event and Pinckard finished fifth. Both runners set new PRs (personal bests) for themselves in this event.
Photo by Ken Gustafson

Though the Wildcats as a team could not win the state crown, Williams was able to bring home an individual state title for SCHS, something that he had been working to do for the past four years.  Williams won the state title in the Boys 800 Meter Run in a time of 2:03.77, which ended up being a new PR (personal best) for him.

His teammate and best friend, Aaron Pinckard, also set a new PR in the 800 Meter Run, finishing the event in a time of 2:05.70.

In many of the Wildcats’ distance events during the last four years, one could see both Williams and Pinckard running neck and neck with each other in the races and finishing at or near the top of the standings. The scene in the Boys 800 Meter Run was no exception and according to Williams, it’s because the two boys push each other. It was also a factor in Williams realizing a goal that he had been working towards for the last four years. “It feels amazing. I’ve been trying to do this for the last four years now. I’m glad it came on the very last race of my high school career,” Williams said. “I really like the T-Shirt. That’s what I’ve been going for.” 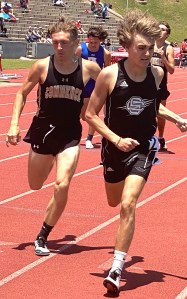 Schley County’s David Williams (right) fights his way towards the finish line in the finals of the Class A-Public Boys 800 Meter Run. Williams finished as the state champion in the event, running a time of 2:03.77.
Photo by Ken Gustafson

For Williams, being able to finish the race running with Pinckard meant a lot for him because it motivated him to push harder for that individual state title.

“It means a lot. About half way through the final lap, I saw him (Pinckard) make a push so I knew I needed to make my push so Aaron really helped me win today,” Williams said. In running a new PR of 2:03.77, Williams shaved three seconds off his previous PR of 2:06. As for Pinckard, he set new PRS in not only the 800 Meter Run, but also the 1600 Meter Run and the 3200 Meter Run. 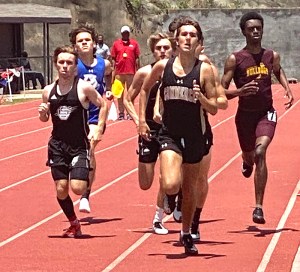 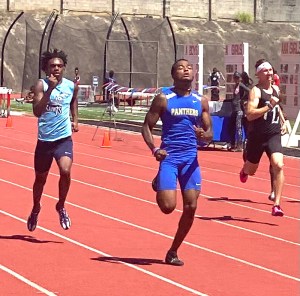 Americus-Sumter sprinter Braylon Green finished as the state runner-up in the GHSA Class AAA Boys 400 Meter Dash. Green ran the race in a time of 49.41.
Photo by Ken Gustafson

While Williams won an individual state title and the SCHS Boys’ finished in third place tied with Washington-Wilkes, athletes from other local area schools shined as well. This year, the Americus-Sumter Panthers did not field a large contingent in the state meet as they had done in the past, as only two male ASHS student-athletes were able to qualify for state. However, those two men, Braylon Green and Christian Waymon, both did Panther Nation proud. Green finished as the State Runner-Up in the Boys 400 Meter Dash with a time of 49.41 and finished just shy of State Champion Jaylin Ferrell of Liberty County. Waymon finished in eighth place in the Boys 100 Meter Dash in a time of 11.47.

Maya Wynn of Furlow Charter, who finished fifth in the Girls 1600 Meter Run and set both a PR and a new school record in the event, very nearly won the state title in the Girls 3200 Meter Run. Wynn finished as the state runner-up in that event in a time of 12:29.23, setting another PR for herself and another school record. Wynn finished four seconds behind state champion Paden Bell of Commerce, who won the race in a time of 12:25.95. 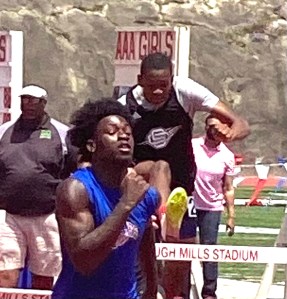 While the Americus-Sumter and Furlow Charter athletes shined in their respective state meets, as far as the local talent was concerned, the weekend belonged to Schley County. Dasani Minter, who set a school record in the Girls Triple Jump, also shined in both the 100 and 200 Meter Dash events. In the 100 Meter Dash, Minter finished in seventh place in a time of 13.15 and also finished seventh in the 200 Meter Dash in a time of 27.44. 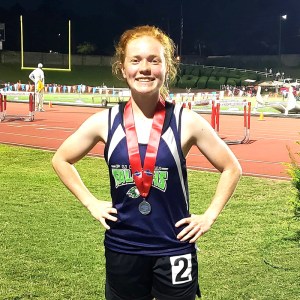 Furlow Charter senior Maya Wynn finished as the state runner-up in the Girls 3200 Meter Run at the GHSA State Meet. Wynn finished the event with a time of 12:29.23.
Photo by Beth Kinney

In the preliminary rounds of the 300 Meter and 110 Meter Hurdles events, SCHS sophomore Clinton Jackson set new PRs for himself. Jackson ran a new PR time of 15.86 in the 110 Meter event to qualify for the finals and finished in eighth place in the finals with a time of 17.14. In the preliminary round of the Boys 300 Meter Hurdles, Jackson ran a new PR of 41.80. In the finals, he finished third in the state in a time of 42.01. Jackson also finished eight in the Boys Long Jump with a distance jump of 20-03.25 and finished sixth in the Triple Jump with a distance jump of 42-02.50. 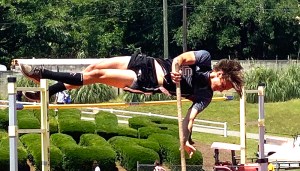 In the Girls 4×800 Meter Relay event, the SCHS team of Hannah Scoggins, Maelyn Anthony, Cheyenne Hardison, Mary Deloch, Natalie Navarro, Diana Wills, Sarah Barnhill and Maddie Walker finished ninth with in a time of 13:31.40. While the Lady Wildcats competed extremely hard in that event, the Wildcats were able to finish in the top three in the boys’ version. The team of Eli Bacon, John Lightner, David Williams, Aaron Pinckard, Dustin Howard, Logan Elliot, Levi Johnson and Josh Brown set a new school record in the event with a time of 8:49.94. The previous school record of 8:59.09 was set by the Wildcats at the First Presbyterian Day School Meet in Macon earlier this season. 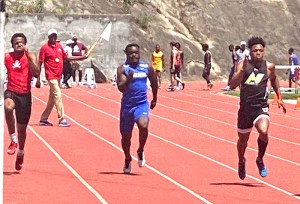 Americus-Sumter sprinter Christian Waymon finished eighth in the state in the finals of the Boys 100 Meter Dash with a time of 11.47.
Photo by Ken Gustafson

“I am very proud of our boys and girls teams,” Burgess said. “There are 83 Single A public schools and our boys were able to finish third and our girls finished eighth. Simply qualifying for State is a big deal, but for us to be fortunate enough to have enough athletes place in the top eight to not only get a medal for their self, but also score points for the team is a great way to end the season.”

For completes of all of the GHSA state track and field meets, go to www.ga.milesplit.com.