The 2021 Americus Travelers Baseball Team started off the summer season by winning the Perfect Game Tournament in Panama City Beach, FL this past weekend, May 21-23. Photo by Angel Lamb

PANAMA CITY BEACH, FL – The Americus Travelers Baseball Team (ATB) could not have gotten its season started off on a better note as the team went down to Panama City Beach, FL and won five of six games to win the Perfect Game Tournament Friday through Sunday, May 21-23, at the Panama City Beach Sports Complex.

After losing to the Gulfport Green Wave 5-3 in their first game on Saturday, the Travelers rebounded to win their next five. In Game 2 against the Panhandle Trojans, ATB Starting Pitcher Landon Kight pitched four scoreless innings to help lead the Travelers to a 10-0 shutout victory, while striking out six Trojan batters. Offensively, ATB was led by local Southland Academy product Henry Johnson, Thomas Ray (Deerfield-Windsor) and Thomas “Chewy” Willis (Deerfield-Windsor). Each of those players had two hits in the game, while Willis drove in three RBIs. 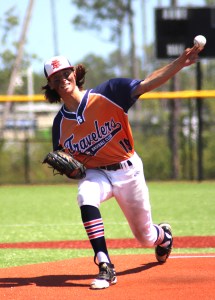 Americus Travelers pitcher Owen Lamb struck out six batters to help lead the Americus Travelers to a 3-1 victory over the Panhandle Trojans in the Perfect Game Tournament in Panama City Beach, FL.
Photo by Angel Lamb

Game 3 was a rematch against the Gulfport Green Wave and it was a pitchers’ dual.  Thomas Ray, who started on the hill for the Travelers, pitched brilliantly, giving up one run on three hits and striking out eight hitters to help lead ATB to a 2-1 victory.

With one out in the bottom of the first inning, both Johnson and Willis drew walks and Chase Ledger reached on an error to load the bases for Gavin Lacey. The Lee County standout catcher then grounded into a fielder’s choice, scoring Johnson from third and giving ATB a 1-0 lead. Then in the bottom of the second with one out, Tripp Thomas singled and Peyton Tompkins doubled, putting runners at the corners. Landon Kight struck out swinging for the second out of the inning, but Thomas was able to score the Travelers’ second run of the game. Those two runs would end up being all that the Travelers needed to win. 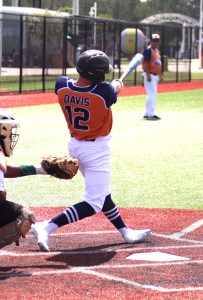 Dylan Davis went 2 for 2 for the Travelers with two singles, scored a run and drove in another in ATB’s 7-4 victory over the Gulfport Green Wave in the championship Game of the Perfect Game Tournament.
Photo by Angel Lamb

In Game 4, the Travelers faced the Panhandle Trojans again. In this second meeting, ATB was able to take advantage of numerous errors. The Travelers scored three runs in the first, one in the second and four in the third to secure a 9-2 victory.. Both teams had only four hits in this game, but ATB Starting Pitcher Tripp Thomas only allowed two runs in five innings of work.

Both teams immediately faced each other again in the Travelers’ fifth game of the tournament, but Game 5 ended up being a pitchers’ dual, with ATB winning 3-1.

Schley County standout pitcher Owen Lamb started for ATB on the hill. In six innings of work, Lamb gave up one run on four hits, walked three and struck out six. Willis came on in relief of Lamb and was able to strike out the last Trojan batter in the top of the seventh to secure the victory for ATB. 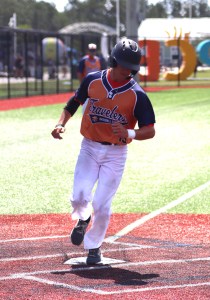 Tripp Thomas is seen here scoring a run for the Travelers. In the championship game of the Perfect Game Tournament, Thomas went 1 for 2 with two runs scored and drove in two RBIs.
Photo by Angel Lamb

Dylan Davis went 2 for 2 with a double, a single and two RBIs to lead the Travelers’ attack. Henry Johnson, who plays his high school ball at Southland Academy, went 2 for 3 with a double and a single..

Having won four out of their first five games, the Travelers found themselves in the championship game of the tournament. They would be facing the Gulfport Green Wave (GLFP), who they split with in two of their earlier games. However, this game belonged to ATB. The Travelers scored a run in the first and two more in the second to take a 3-0 lead, but GLFP exploded for four runs in the bottom of the second to take a one-run lead. However, ATB responded in the top of the fourth when Johnson drove in Tompkins on an RBI double to tie the game at 4-4. Then in the top of the fifth, the Travelers took the lead for good when Tripp Thomas drove in two runs on a double to center field. Owen Lamb then drove in Thomas on an RBI single to give ATB a 7-4 lead. 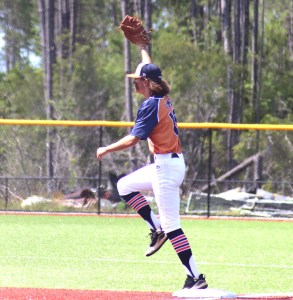 Owen Lamb makes a play at second base.
Photo by Angel Lamb

In the bottom of the fifth, Chase Ledger struck out the final two batters he faced to secure the win and the tournament championship. Ledger was brilliant on the mound for ATB. The Southland Academy standout gave up four runs on three hits, but struck out 13 GLFP batters to earn the win.

Johnson, Davis and Lamb each had two hits in this game, while Lamb and Tripp Thomas each drove in two RBIs. 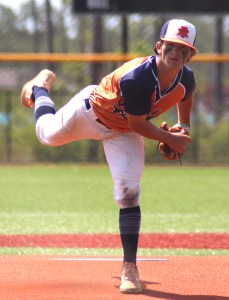 Thomas Ray gave up one run on three hits and struck out eight batters to lead the Americus Travelers to a 2-1 victory over the Gulfport Green Wave in their third game of the Perfect Game Tournament.
Photo by Angel Lamb

This coming weekend, the Travelers will be at home as they participate in the GSW Team Showcase at Georgia Southwestern State University Friday through Sunday, May 28-30. This showcase will be played in front of GSW Head Baseball Coach Josh McDonald and other college coaches so that these players can show off their skills for the purpose of possibly earning college scholarships.