From campus to court room: One GSW graduate is trading her gavel for the scales of justice 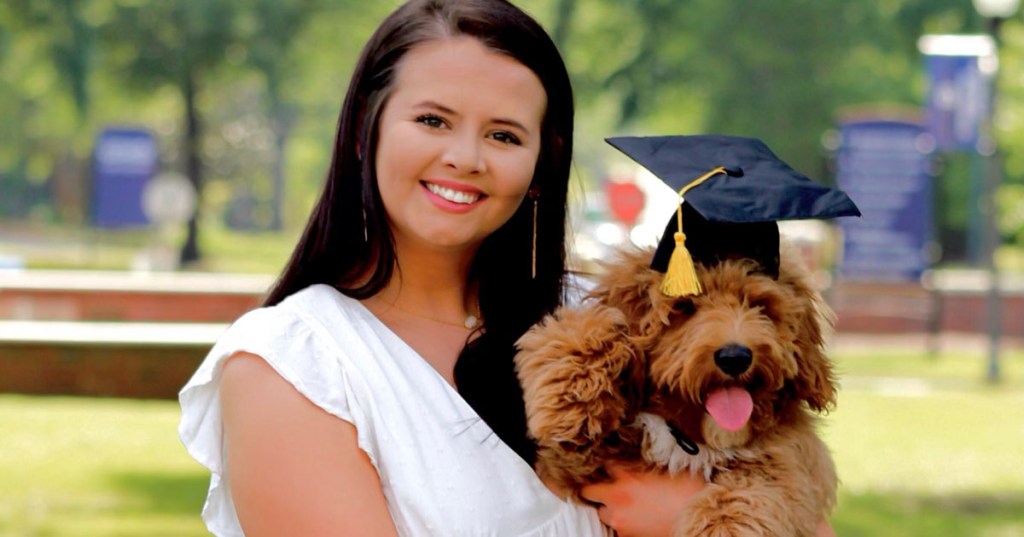 Savannah Hall, a political science major and outgoing Student Government Association (SGA) president, just graduated from Georgia Southwestern State University (GSW) after only three years and is headed to Mercer Law School in the Fall to pursue a career as a criminal defense attorney.

Savannah wants to spend her time bringing about justice for people who are often forgotten and left behind in our society.

“Even the worst criminal in the world deserves the right to be represented by an attorney who is not only competent and good at their job, but compassionate enough to understand that the outcome of this person’s case could very well be the end of their lives,” Savannah stated.

From the age of 17, Savannah knew she wanted to be a lawyer – although her parents would tell you this began when she was much, much younger.

As the oldest of five girls, Savannah enjoyed playing dress up, Barbies, and baby dolls as a kid, but her favorite hobby was “playing lawyer” with her parents.

“Arguing, in general, has always been a deep passion of mine,” she laughed. “We watched a lot of news when I was growing up so when we’d hear about a crime committed or a controversial topic, my parents would let me argue both sides of the issue and they would pick which was more convincing.”

“I basically had my own private debate team at home,” Savannah said sarcastically.

Growing up in Blakely, Georgia, Savannah admits to playing in the occasional mud hole or two. She was active in extracurricular activities such as basketball, cheerleading, softball and dance, and competed in pageants from age 5 to 16. Savannah said she could also be found playing her guitar or piano and reading which she still thoroughly enjoys to this day.

Transitioning to GSW as a freshman in college was easy for Savannah given her familiarity living within a tightknit community.

“Everybody knows everyone and cares about the things happening in your life,” she said. “It feels like having a lot of extended family members around all of the time that just aren’t related to you.”

Savannah shared that she chose GSW because she appreciated and could relate to the closeness and comfort that the campus community offered.

“It was refreshing to know I wasn’t going to be one of 100 students sitting nervously in a big lecture hall. Not that I couldn’t have handled that too, but it meant more for me to be able to establish personal relationships with my professors and classmates.”

After joining Kappa Delta Sorority and the Student Government Association, Savannah was able to form those close-knit relationships she knew she’d find at GSW and gain leadership experience within those organizations.

Savannah credits having a stable support system and good friends with helping her get through the tough moments that college and being a leader sometimes bring.

“It’s no secret that college is hard. I had no idea the impact my friends that I’ve made here would have on my ability to succeed. There was never a time that I felt like I failed at anything because I found a group of people that wouldn’t let me see the bad in any situation. They helped me see it was just an opportunity for learning and growth.”

Savannah served as a senator in SGA which allowed her to see the impact that students have on campus and it gave her a “taste of leadership” that inspired her to run for SGA president.

“I wanted to further the work I saw being done on campus and try to help facilitate some of those changes in a greater leadership role”.

Savannah Hall with dogAs SGA president, Savannah was proudest when she saw senators and representatives stepping out of their comfort zones in order to promote and facilitate change on campus. She loved being able to witness the results of their hard work, meaningful discussions, and careful planning.

A few of the items SGA was able to accomplish under Savannah’s guidance included incorporating additional organization and freshman representatives for a more inclusive and diverse array of student voices, and hosting town hall events on a variety of topics featuring faculty, staff and University administration.

Balancing school, leadership roles, and a social life is hard work. Savannah expressed that being flexible is crucial. She felt she was most productive when she was able to organize her schedule, prioritize, and plan ahead – but also understood that even the best plans can get thrown off course.

In addition to her peers, Savannah credits her professors for being instrumental in her growth as a student and as a person.

“Dr. [Jason] Berggren has been the most impactful on my life and education, and invested the most in my future. Aside from writing a glowing recommendation letter that helped me get accepted into 7 law schools, he has acted as a mentor to me both academically and personally. He is one of the main reasons I was able to lead SGA this past year, as he was the advisor for 10 years and was always open to answer my questions or give guidance when I needed it.”

Savannah also wanted to thank professors Bonnie Levine-Berggren, Kay Sassi, and Dr. Susan Bragg who were influential in her development as well.

Majoring in political science, a choice Savannah made as a freshman, was intentional for getting into law school.

“I would like to say that I was drawn to political science because of a passion for politics and to study political thought and theories of government. While I do enjoy those things, the real reason I chose political science is because my research on majors that performed best on the LSAT proved this was the way to go.”

Her favorite classes were American Government and U.S. Politics.

Savannah would like to pass on a little advice to the GSW student body and incoming freshmen.

“Take advantage of the close-knit community that GSW fosters and enjoy the ability to be an effective facilitator of change on this campus. We have a unique school that allows us to be close with faculty and staff members, administration, and fellow students and that is an important feature of our small school.

Savannah continued to add, “I encourage anyone who thinks change is needed at GSW to reach out to someone and express their ideas. We have an administration that wants to hear our voices and feedback on different aspects of the University. I encourage everyone to be involved as much as possible while you’re here.”

Savannah will be attending Mercer Law School on scholarship in the Fall. Upon graduation, she plans to work as a criminal defense attorney as a public defender or member of a private firm, and eventually plans to make partner at a reputable firm and maybe even open her own private firm one day.

As she continues her journey to law school, Savannah will always lead by remembering her favorite quote from Dr. Martin Luther King Jr.: “Returning violence for violence multiplies violence, adding deeper darkness to a night already devoid of stars. Hate cannot drive out hate: only love can do that.”