Is Providence Canyon anything but a good example of bad behavior? Part 10 Running the Film Backwards

The view from the top

Now that you know what James Hutton inferred from his observations in Scotland, we can see how to make and apply those same observations in Providence Canyons. The best way to do this would be to cut this article out of the paper and take it with you on an actual fieldtrip, of course, reading as you walk. But I hope that reading it in a chair at home will work almost as well.

Start at the rim, near one of the parking areas. Look at the rocks in the canyon wall and familiarize yourself with them: the “red stuff” at the top is very obvious; the multi-bedded and multicolored Providence Sand beneath it comprises most of the wall. Look especially for the common “cross-beds” a thick layer of sand with thinner internal layers not parallel to its top and bottom. The Perote Member is not visible from the top, but you can see it later. Look at the contact between the two visible packages of strata, noticing how it undulates up and down across any face.

Why can you see these rocks? The reason, of course, is the erosion of the canyon by uncontrolled runoff from the 19th century until now. Try to imagine what the area looked like before the erosion occurred. Here’s a hint: as you drove to the canyon you drove across the hilliest part of the Georgia Coastal Plain, and much of the reason for that steep, but rolling, up-and-down landscape was natural erosion of Providence Sand. The sand really is not particularly fertile, drains far too easily, and naturally supports mostly scrubby forest growth.

Now imagine how it looked right after it was clear-cut: modestly gentle, high-relief hills, waiting for the plow. The plow was not wisely applied. Mules dragged it back and forth in straight paths across the landscape without regard to the natural contours of the land, dooming the farm to ruin and setting up the existence of a beautiful park in the middle of nowhere.

Once you’ve enjoyed the view, start the hike down. Along the way look for signs of smaller gullies cutting across the trail or starting just below it. At the bottom of one of them you can see a pond, and if the water level is low enough you’ll see the delta it has built into that pond. (You can also look for the raccoon kits my grandson and I saw scurry into a drainpipe one day last spring, though I’m sure they won’t fit into the pipe now.)

Once you reach the bottom spend some time looking at the little braided stream. Identify the channels and the longitudinal and lateral bars. Watch the suspended mud go past, the gravel roll along the bed, and the sand grains saltating (bouncing) along. Notice the small ripples on the bed and watch them migrate downstream as they are eroded on the upstream faces and as sand cascades down the downstream faces. Consider that this is what has made the canyon in a few tens of decades: a little sediment moving ceaselessly down a little stream every fraction of every second of every day and night for nearly 200 years. How many fractions of a second is that, and how much sediment does that translate to? Look around and you can see in your mind what is not there anymore. What could a much bigger stream do? How much sediment can the nearby Flint and Chattahoochee Rivers, which are much older streams, have moved in their lives? 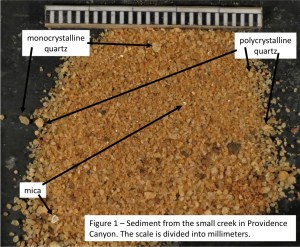 Scoop up a little sand and have a look at it, ideally with a magnifying glass (Figure 1). There’s a little light-colored mica, but mostly the sand is made of quartz. Some of the quartz is clear, single crystals, angular in shape because it has spent very little time in transport. Other quartz is opaque and white. This is “polycrystalline” quartz, made of many smaller crystals of the mineral instead of one single crystal.

Put a small glass into the water and let it fill. Let the mud (a good technical term meaning clay and silt) settle out. Notice that the coarser silt grains settle first and wind up on the bottom. The silt is just more finely abraded quartz, but the clay is a different mineral, or maybe suite of minerals, altogether: “clay minerals”. They almost certainly formed from the weathering of feldspar sand in the source rocks. What is the source for the grains in the stream?

What is the “source rock” for the sediment of the stream? This one is easy. The entire drainage basin of the stream is within the confines of the park, and so it is the canyon walls that feed sediment to the stream. We must examine the source, and so we approach the wall of the canyon.

It is not advised that you climb on the walls because that only speeds their destruction, but the “red stuff” is only different from the Providence Sand in two regards: color and a higher clay content. Looking at the Providence is all we need do to understand the source.

If you are looking at a brownish sand, have a quick look (Perote Member) and move on to something white. The main body of the Providence is much easier to work with. Take a little of the sediment that has already collapsed onto the foot of the walls (“talus”) and have a look. You will find quite a bit of clay, almost certainly formed in place by the weathering of what was originally feldspar silt, sand, and gravel. There is also a little light-colored mica, but most of the grains are mono- and polycrystalline quartz. This should be no big surprise. From where you stand you can probably toss your handful of sand into the stream it would get into in the next big rain anyway. Figure 2 shows photomicrographs of sand and gravel sifted out of the Providence Sand.

See how easy geology is? You just look (the stream sediment is such-and-such), formulate a hypothesis (it’s probably coming from the canyon walls) propose a test for the hypothesis (therefore the canyon walls should have the same material in them), and perform the test (they do indeed). But to be a good geologist (or chemist, or anything else) you then have to ask, “so what?”. You have to consider, as Hutton did, the implications of your discovery. The source rock is almost exactly identical to the stream’s sediment, though the stream is sorting it by size class compared to the wall. This is always the case in a nearby source. The stream around Stone Mountain contains grains of the minerals in Stone Mountain, and the same could be said of the head of any stream, anywhere. The source and the sediment are so similar, in fact, that you find yourself wondering if, since the stream sand has an obvious source, does the Providence Sand also have a source, though it is not obvious? This was the genius of James Hutton and all we have to do is copy him.

Looking into the abyss of time in Georgia

Suffice it to say that your instinct would be a good one. Not only can we say unequivocally that the Providence Sand was deposited as sediment derived from a “distant” source, but by looking at the grains, the ripple marks (and larger, similar sedimentary structures called “sub-aqueous dunes”, which you can see as crossbedding from the rim), and the overall shape of the Providence across Georgia and Alabama, that it was deposited in a suite of large deltas, like the Apalachicola and Mississippi Deltas, along an ancient coast. The delta of a stream is generally far from its head, and so the source rocks might be only vaguely similar to the sediment in the delta, modified by many processes, both in the source and along the course of the stream.

In the next (and final) installment of this series we will go back and see what the source rocks of the Providence Sand were, where they lay (broadly speaking), and what they mean about the unimaginably deep prehistory of Georgia and the eastern United States.