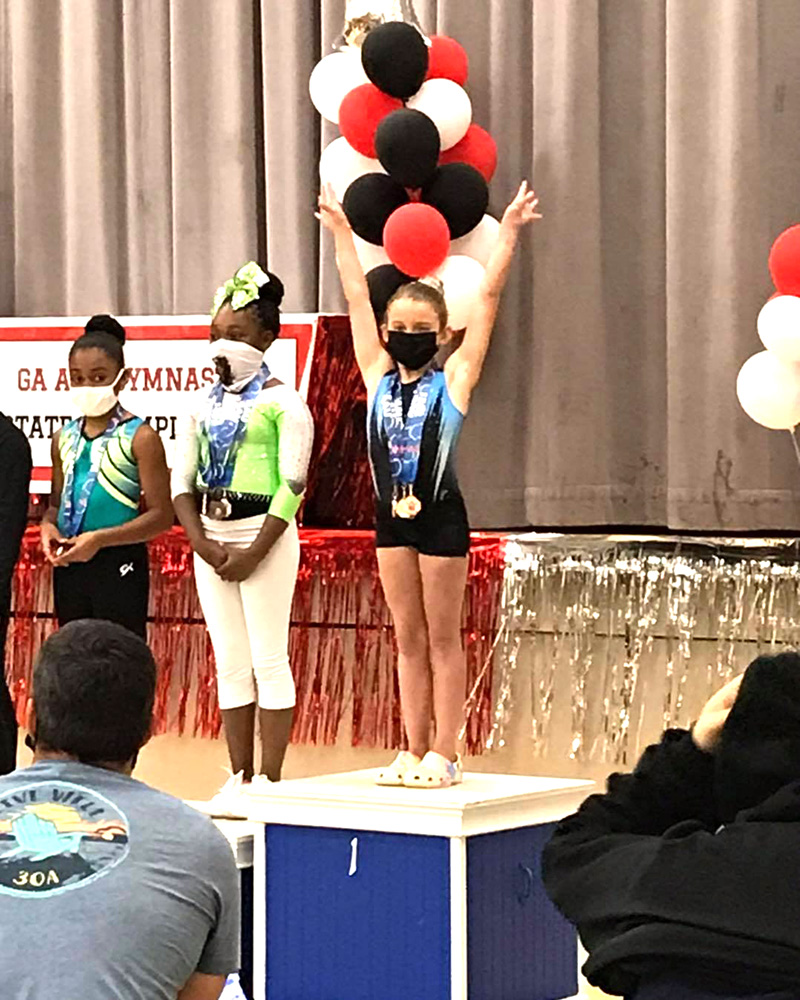 Sumter Gymnast Neal Smith won the state championship in the floor exercise in the Xcel Silver Division at the AAU State Gymnastics Meet in Roswell, GA. Photo by Melissa Singley

ROSWELL, GA – On Saturday and Sunday, May 1-2, the Sumter Gymnastics Team (SGT) competed in the AAU State Gymnastics Meet in Roswell, GA. There were almost 900 gymnasts representing 50 teams at this meet throughout the weekend in various levels, which made for some tough competition. 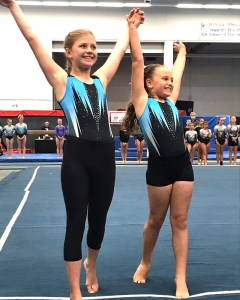 In the Xcel Bronze Division, Hayley Dean placed fourth on beam with a 9.15 and in all around with a score of 36.675. Zoey Brassell placed sixth on bars with a 9.05, Ashley Zwierko placed eighth on floor with an 8.725 and Aubree Patterson was ninth on balance beam with a score of 8.675.

In the Xcel Gold Division, Kinsley Collins placed fifth on floor with a 9.15 and Amelia Kinnebrew placed fifth on vault with an 8.8. Carley Codner placed sixth on balance beam with a score of 9.1 and was also recognized for being a graduating senior at the state championships.

“This has been an interesting season for all our gymnasts. We began training not knowing if we would even have a competition season due to Covid,” SGT Head Coach Melissa Singley said. “We were hopeful, but unsure. These girls have worked so hard in crazy circumstances of masks, social distancing, and even some moments of quarantine. I cannot even begin to express how proud I am of every single one of these young ladies. We have had a couple of gymnasts that had to overcome broken bones and miss time training and come back and relearn some skills and become confident in themselves again. We had a couple of gymnasts work through some mental blocks and being nervous to throw some skills to competing them at state meet better than I’ve ever seen them do it. There have been things that should have been a setback but instead made these girls stronger.” 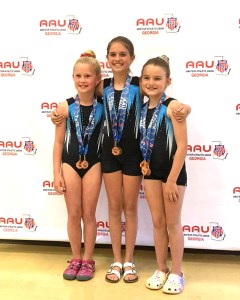 Singley went on to thank the parents and coaches for their hard efforts in helping to make the successes of these gymnasts a reality. “This sport is such a team effort in coaches, parents, and the athletes,” Singley said. “We would not be successful without these wonderful parents and with my amazing coaches that I rely on heavily. I judge some meets these gymnasts attend and if it wasn’t for my coaches stepping up and being the head coach at the meets, we would not be as successful.” Singley went on to praise Carley Codner for competing all the way through her senior year. “This is the first time we’ve had a graduating senior and we could not be more proud of her hard work in both school and at the gym,” Singley said. “She (Codner) also coaches some days so she does not get the training in that she could. She has great work ethic, as do all these gymnasts. I love coaching these ladies because I know that I will laugh every day with them and watch them grow as both athletes and as individuals.”

Coach Singley also added that she is very excited to see what the future holds for her squad next season, as the SGT will have another senior gymnast competing; Madison Smith. Singley is hopeful that Smith will be competing as a level 10 gymnast this coming spring and has more confidence in the fact that the squad will have a competition season in the upcoming year.