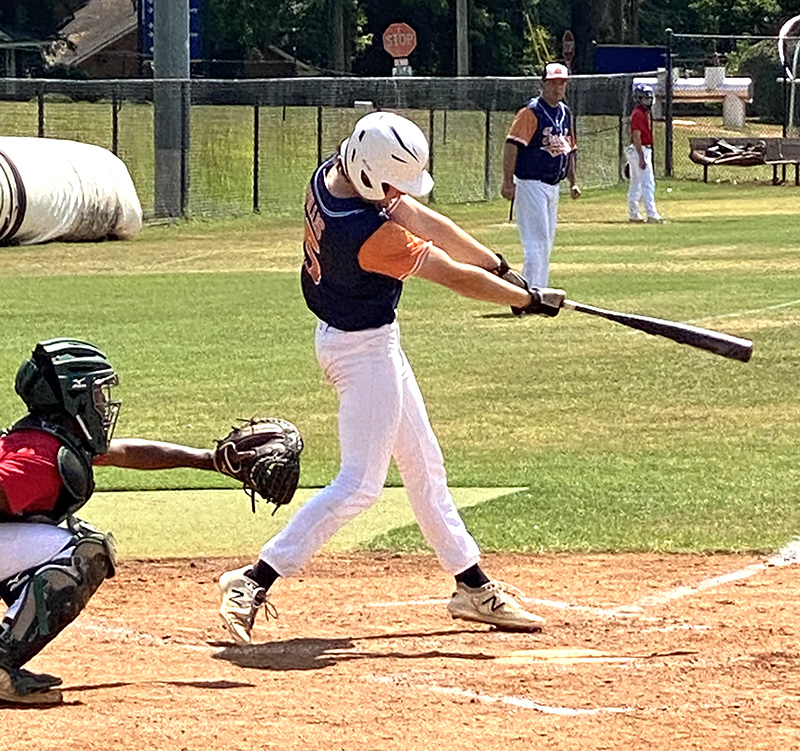 Americus Travelers third baseman Henry Johnson, who plays his high school ball at Southland Academy, drove in the winning run on an RBI double to give the Travelers a 6-5 lead over SoPro Dothan (Kirkland) in the GSW Showcase. Photo by Ken Gustafson

AMERICUS – After winning the Perfect Game Tournament in Panama City the weekend before, the Americus Travelers Baseball Team (ATB) participated in the 2021 Memorial Day Weekend Team Camp this past weekend at Georgia Southwestern State University.  The Travelers played four games in this showcase and ended up going 2-2.

On Saturday, May 29, the Travelers dropped their first two games of the showcase to Bullpen Athletics (7-6) and to Bash Express (5-4). However, they rebounded on Sunday, May 30, with two straight wins over SoPro Dothan (Kirkland) by scores of 6-5 and 19-2.

“Yesterday, we played good against two really good teams,” ATB Head Coach Tim Estes said.  “We made a couple of errors that cost us in both games. We gave up three runs on errors in Game 1 and three in errors in Game 2. When you’re playing at this level, those kind of things hurt you and it did. I felt like we came back out and pitched well today in both games and swung the bat a little better. We were a little more disciplined at the plate.” 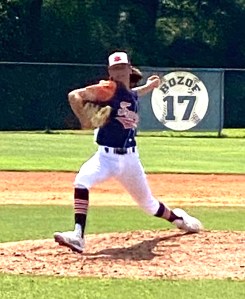 Americus Travelers pitcher Own Lamb is in action in ATB’s first game of the GSW Showcase against Bullpen Athletics.
Photo by Ken Gustafson

This event was not so much as a tournament ax it was a showcase to give the Travelers’ players, as well as the players on the Bash Express, SoPro Dothan (Kirkland) and Bullpen Athletics squads the opportunity to showcase their skills in front of the GSW coaching staff and coaches from other area college programs such as Abraham Baldwin Agricultural College (ABAC) and Andrew College.

In their first game of the showcase against Bullpen Athletics, it was a back-and-forth affair between both teams through five innings of play, with the score tied at 6-6. However, Bullpen Athletics was able to score the deciding run in the top of the sixth to earn the 7-6 win. 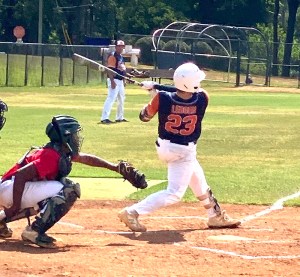 Americus Travelers catcher Chase Ledger went 1 for 2 at the plate with a double and two RBIs to help lead ATB to a 19-2 victory over SoPro Dothan in the Travelers’ final game of the GSW Showcase.
Photo by Ken Gustafson

In Game 2 against Bash Express out of Conyers, GA, the Travelers fell behind 4-0 in the bottom of the third, but fought there way back by scoring two runs in the fourth and two in the sixth. However, they fell to the boys of Conyers by the score of 5-4.

In the top of the fourth, Lacey led things off with a single. After Thomas “Chewy” Willis struck out for the first out, Thomas Ray was able to draw a walk to put runners at first and second. Peyton Tompkins then struck out for the second out, but Southland’s Chase Ledger was able to reach on an error, allowing Lacey and Ray to score. 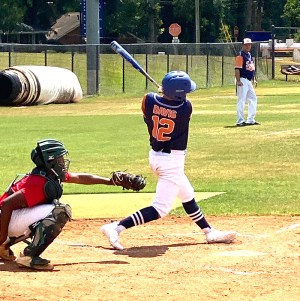 Americus Travelers right fielder Dylan Davis went 1 for 2 with a single in the Travelers 19-2 victory over SoPro Dothan.
Photo by Ken Gustafson

Bash Express responded with a run in the bottom of the fourth, but the Travelers would not go away. In the top of the sixth inning, ATB very nearly staged a comeback. Caden King, who plays his high school ball at Fitzgerald High School, drew a walk to start things off. Then Lacey doubled to center field, advancing King to third with nobody out. Willis then reached on an error that allowed a King to score, bringing the Travelers to within two at 5-3. Both Lacey and Willis advanced to third and second respectively on a passed ball. This meant that a base hit from Ray would more than likely tie the game. However, Bash Express pitcher Mason Olivarez was able to strike out Ray for the first out. Peyton Tompkins was able to drive in the Travelers’ fourth run of the game on a sacrifice fly, but Olivarez was able to strike out Ledger to end the threat and the game.

Lacey led the Travelers’ offense by going 2 for 3 at the plate with a double, a single and two runs scored. Henry Johnson also had a good day at the plate as he went 1 for 2 with a triple. On the mound, the Travelers started Caden King for the first three innings. In three innings of work, he gave up four runs on three hits, walked six and struck out five. Landon Kight came on in relief of King. In two innings of work, Kight gave up one run on one hit, walked four batters and struck out four.

Having lost their first two games of this showcase, the Travelers came back on Sunday poised and ready to rebound from Saturday’s setbacks and ready to show the college coaches in attendance that they have what it takes.

Their final two games were against SoPro Dothan (Kirkland), an all-star team from Dothan, AL. In their first game, the Travelers jumped out to a 4-0 lead in the bottom of the first. SoPro responded with two runs in the second and two more in the sixth to tie the game, but the Travelers would took a 5-4 lead in the bottom of the sixth when King drove in Tripp Thomas on an RBI single.

SoPro responded by tying the game at 5-5 in the top of the seventh, but in ATB’s last at bat, they would have the final answer. Lamb and Ledger led off the frame by drawing walks. Landon Kight then executed a sacrifice bunt, advancing Lamb to third and Ledger to second with one out. This set up Henry Johnson’s opportunity to be the hero and he came through with a walk-off RBI double to give the Travelers a 6-5 win.

That exciting victory carried over into the Travelers’ second game against SoPro, which was also their final game of the showcase. Whatever offense they were holding back in the first three games, they let it all loose in this final game.

The Travelers jumped out of the gate in the top of the first, overwhelming SoPro by scoring six runs on a single and taking advantage of five walks. That first inning pretty much set the tone for the rest of the game. The Travelers poured it on after that, scoring four more runs in the third and exploding for nine in the fourth to secure a 19-2 victory over the boys from Dothan.

Tripp Thomas started on the hill for the Travelers and went the entire way. He gave up two runs on three hits, walked four and struck out seven SoPro hitters.

“We’re learning and we’re learning to compete at the highest level,” Estes said. “Part of that process is playing good teams and learning what you can and can’t do.”

Up next for the Travelers is a trip to Montgomery, AL for the 2D Sports Alabama Opener June 4-6. The tournament will be played at both Faulkner University and Auburn-Montgomery University. The Travelers’ first game of the tournament will be on Friday, June 4 at 12:15 EST against Next Level Baseball of Tallahassee, Fl. Then at 5:45 p.m. EST on Friday, ATB will face off once again against SoPro Dothan before playing their final game of pool play on Saturday, June 5 against Maximum Exposure from Tuscaloosa, AL. Tip off for that game is at 10 a.m. EST.