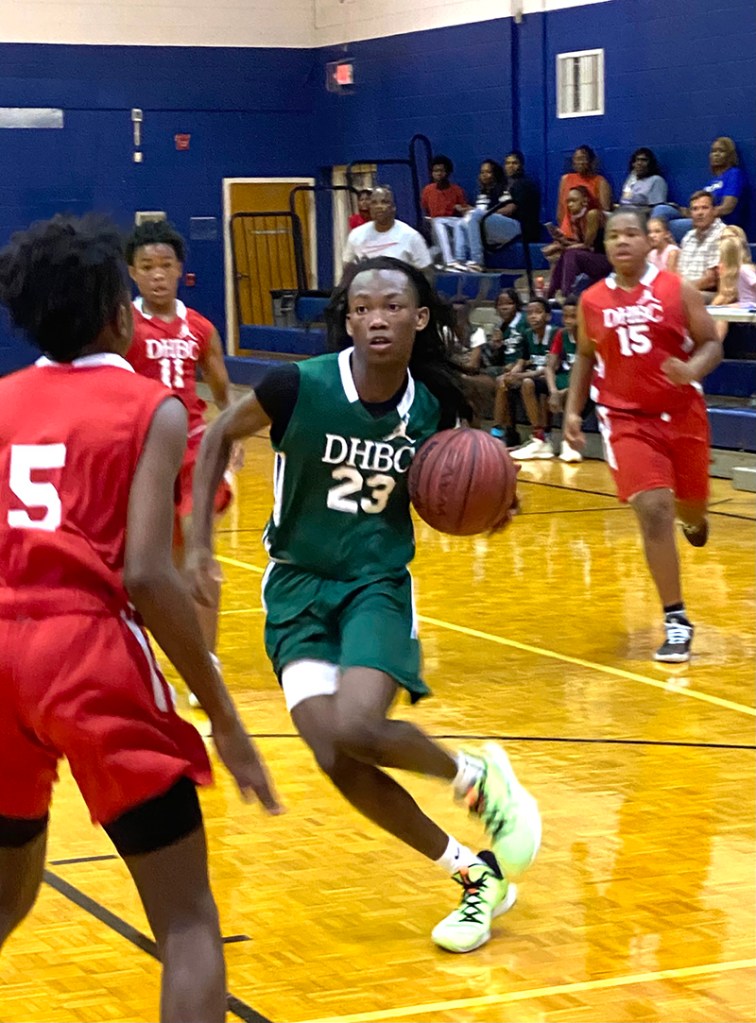 Amari Hubbard (23) of the 14U Baylor team drives to the basket against the 14U Arkansas team on opening day of the Dwight Harris Basketball Summer League. Hubbard scored 19 points to lead his team to victory. Photo by Ken Gustafson

AMERICUS – For many kids in Sumter County and the surrounding areas, Tuesday, June 1 was an exciting day for them as the eighth annual Dwight Harris Basketball Summer League (DHBSL) kicked off its summer season at Ninth Grade Academy.

This league is for kids ages 7-17 and features many high school players in the 17U (15-17 year-old) Division, along with elementary and middle school players with lots of potential.

This year, instead of the teams being named after NBA teams, the teams are named after top college programs such as Baylor, Arkansas and UCLA.

Jaden Sims (11) of the 11U Arkansas team goes up for a rebound in the first game of the 2021 Dwight Harris Basketball Summer League.
Photo by Ken Gustafson

The first game of the evening began at 5 p.m. and featured a game between two 11U (9-11 years old) boys’ teams: Baylor and Arkansas. The Baylor team wore green jerseys and the Arkansas team was dressed in red jerseys. From the get go, the Arkansas team controlled the game from start to finish and won 34-7. Elijah Fuller led the way for the Razorbacks with 12 points and Carmyn Watts had 10. Jordan Jones led the Baylor team with five points.

The second game of the evening was an extremely competitive game between the 14U (12-14 year old) Baylor Bears and the Arkansas Razorbacks. Throughout the contest, both teams went back and forth. However, with 2:48 left in the game and the Arkansas team leading 33-30, 14U Baylor’s Tony Wilcher drained a three-pointer to tie the game. That was the beginning of an 11-0 run by the Bears to close out the game and to earn themselves a 41-33 victory. Amari Hubbard led the way for the Bears with 19 points and Wilcher had eight, including the crucial three-pointer with a little less than three minutes to go.

Amari Hubbard of the 14U Baylor team goes up for a rebound.
Photo by Ken Gustafson

The third game of the night featured two girls’ 17U teams (15-17 year olds): the UCLA Lady Bruins and the Baylor Lady Bears. These two teams featured a few of the best high school players in the area, such as Trinity Jackson and Kaylin Holley (Americus-Sumter) and both Morgan Weaver and Lauren Duke of Southland Academy. This contest was a hard-fought, back and forth game as well. With the score tied at 40-40, Jackson was fouled with 1.2 seconds left and would go to the line with the chance to win it for the Lady Bears. Jackson missed the first foul shot, but due to a lane violation against UCLA, she was given an extra free throw. Jackson was able to make the next two foul shots to win it for the 17U Baylor team.  Jackson led all scorers with 21 points and Weaver had 12 in Baylor’s winning cause.  As for the Lady Bruins, they were led in scoring by Aliyah McGarrah with 19 points. 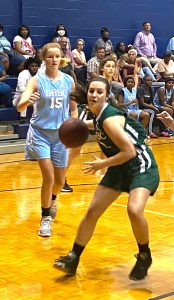 Morgan Weaver, who plays high school ball for Southland Academy, drives to the basket for the 17U Baylor girls’ team. Weaver scored 12 points in the Lady Bears’ win.
Photo by Ken Gustafson

The final game of the evening featured two 17U boys’ teams: Baylor against Arkansas. These two teams featured area high school players, such as Kyric Davis and D.J. Hurley (Americus-Sumter). This game was a low-scoring defensive struggle, with the Baylor team team leading 10-6 at halftime. However, the 17U Arkansas Razorbacks went on a run to start the second half and eventually pulled away to secure a 32-21 victory. Elijah Westbrook led the Razorbacks in scoring with eight points and Kyric Davis chipped in seven. D.J. Hurley led the Baylor team with nine points.

Aliyah McGarrah (2) of the 17U UCLA girls’ team scored 19 points in her team’s debut in the Dwight Harris Basketball Summer League.
Photo by Ken Gustafson 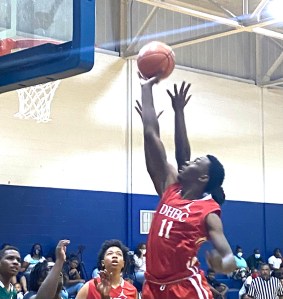 Kyric Davis of the 17U Arkansas team, who plays high school ball for Americus-Sumter, goes up and fights for a rebound against 17U Baylor. Davis scored seven points to help lead his team to a 32-21 victory.
Photo by Ken Gustafson

After the regular season ends in the middle of July, there will be post-season tournaments in each of the divisions to crown league champions. In addition to the 7-17 age groups, there will also be a league for young men ages 18-25.